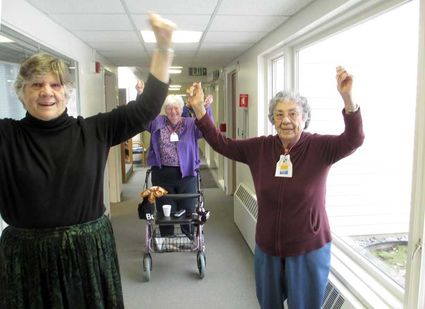 Left to right: Mary Johnson, Barbara Franklin (in back) and Gloria Fiero participated in last year's Iditawalk at the Chugiak-Eagle River Senior Center. Coming up on its sixth year, the walk is a month-long fitness challenge combining activity, education and fun.

"I see a lot of seniors who have done something right. Many are fit and active into their 80s and 90s."

Betty Burke shares this positive assessment when reflecting on her position as Health Outreach Nurse at the Chugiak-Eagle River Senior Center.

"My job is to promote optimal wellness in the senior population here," she says, "to promote fitness in general."

Six years ago, Burke hooked onto the idea of launching a program related to the Iditarod Sled Dog Race, focusing on February fitness for the center's seniors. "I'd done a lot of volunteer work in the schools and saw how all the 'a-thons' generated interest in the kids – the read-a-thons, walk-a-thons. And there was always lots of excitement centered on the Iditarod. I decided to combine these interests into a program for our seniors, and called it the Iditawalk."

But this is way more than a walk in the park or run around the track for them. Burke has placed the focus on education and a wide range of health awareness opportunities for seniors at many fitness levels. She has participants sign up and form teams.

"Last year we had eight teams with six people on each – about 40 people taking part."

They then work on different health behaviors to collect points. Yes, walking can be one of these behaviors, sometimes with walking distances marked off in the hallways, but Betty indicates that this year she plans to put more emphasis on the time spent walking rather than distance covered.

And there are many more ways to earn points besides physical activity, with changes focused on behaviors to promote better health.

"I've found it's food related habits that are often the most difficult to change," Burke shares. Iditawalk points can be earned by working on some of the following changes:

• no eating of fried foods for six days

• eating at least three helpings of vegetables each day

• eating a breakfast including protein

• keeping a food dairy for a day

• learning the difference between simple and complex carbohydrates.

Other ways to earn Iditawalk points include:

Burke adds that bonus points can be earned by encouraging a friend to participate or helping someone record their points.

"We work on team member support. As we fire up the program in early February, we give out Iditawalk Trail logs and find team leaders – the lead dogs – someone to keep track of team miles or points. Team sign-ups are scheduled for February 10 to February 15. The following week, we will begin collecting points," Burke says. "That's before the start of the actual Iditarod Race on February 28. We try to finish our program in 28 days, in line with the pace of the fastest mushers."

Not to be outdone by the "real" Iditarod, with its mushers' banquet at the Nome finish line, Betty plans an Iditawalk banquet (hors d'oeuvres in the afternoon) in March, when final points are tallied and achievements recognized.

"We have drawings for prizes," Burke says, "and we like to have 'Tales from the Trails'. We are hoping to have an Iditarod Race musher or someone from the check points come talk to our participants."

Burke adds that more excitement associated with February is being generated at the Chugiak-Eagle River Center by the remodeling underway.

"It's massive," she says. "We have hopes that the new dining room will be open for our February 14 Valentines Day dinner. Ideally the new covered entryway will be finished by then, too."

When the remodel is completed, there will be a large bank of restrooms off the dining room, an expanded lobby and gift shop, new office space and a redesigned kitchen.

"We are planning the grand opening for this spring," Burke says. "Come see us!"

For more information on the Iditawalk, call Betty Burke at 688-2609.