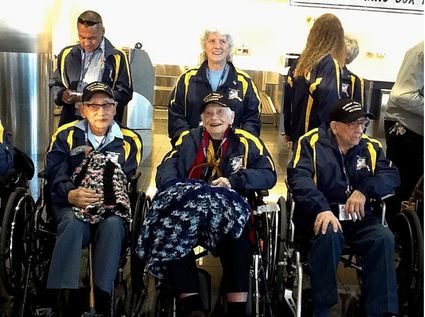 "People laugh at me," says Maria James, chairperson of the Senior Veterans Group at the Anchorage Senior Activity Center (ASAC). "I seem able to spot a veteran – often a cap with pins and medals is a clue – and I chase after them."

Maria is in hot pursuit because of her compulsion to let them know of their benefits as a veteran, and to encourage them to get to know other veterans at the center.

"So many veterans are not aware of the benefits available to them," she says.

Known for networking and abundant energy, Maria, herself a veteran, organized the center's Senior Veterans Group in 2011. They began meeting twice a month, and still do.

"Our focus as a group is to provide a social outlet for our senior veterans, providing a space for them to share stories and connect with each other."

At these gatherings, there may be guest speakers, presentations, discussions on topics relevant to senior veterans in the community, and information on resources related to veteran concerns. The group meets at noon on the second and forth Tuesday of each month.

But things seem to mushroom and grow under Maria's tutelage. The center hosted its first "Celebrate Senior Veterans Week" in 2012, and will host the event again this year, from Nov. 10 to Nov. 14, with the exception of Tuesday, Nov. 11, when the center closes in observance of the Veterans Day holiday.

"It used to be a luncheon with various activities in a restricted area of the center," Maria recalls about Veterans Week. "But this year I have developed plans to include all areas of the center." It has bloomed, to the extent that one's mind may be boggled by all the opportunities and happenings taking place during the week.

The week opens with the Information Fair on Monday, Nov. 10, from 10 a.m. to 2 p.m. There will be 20 booths with vendors providing information about resources available to veterans and their families, addressing topics such as Medicare, long term care, nutrition, post traumatic stress disorder, exercise, transportation, insurance.

"I'm all about networking, tying things together for the veterans," Maria offers, as she continued to list what will be available just at the fair.

Eventually, Maria had piled on my lap so much information about the week – handouts, brochures, fliers, clippings – that it was full, and she got out a bag for me to store everything. And she sent a stream of emails listing even more events.

"I forgot to mention that on Monday there will be free coffee and desserts that have been donated to the senior veterans," one email read. "They only need to show their veteran ID. This will be in our Arctic Rose Restaurant, from 10 a.m. to 2 p.m."

It became obvious that I would be able to address only the week's highlights. Wednesday there will be a Veteran Authors Day. Thursday a silent auction will be held in the lobby, with proceeds helping to offset the costs of future senior center activities. Thursday is also the day for the Senior Veterans' Luncheon, from noon to 1:30 p.m. Friday there are tournaments – poker, pool and pinochle.

Also on Friday there will be a reception for the Veterans' Art Show.

"I'm so proud of our art program," Maria says. "We have phenomenal art teachers here, and this will be our first year for the veterans' show.

There are handouts at the senior center with event Veterans Week event listings and times. More information is available by calling the center at 770-2000 or visit http://www.anchorageseniorcenter.org.

Honor and the Last Frontier: One veteran's story

But back to veterans sharing stories – and every veteran certainly has one. When I first reached Maria for information for this story on Veterans Week, she was chasing around with a veteran who had become her close friend, 96-year-old Marcey Vreeland.

"We argue over our relationship," Maria admits. "Are we just friends, or more like mother and daughter – or maybe grandmother and granddaughter?"

Maria was helping Marcey get organized for her trip to Washington D.C. the next day as part of the Last Frontier Honor Flight. Marcey and about 30 other veterans were being flown across country on October 22 to be recognized in our nation's capital.

"It took me two years of encouraging Marcey to convince her to go," Maria says.

And so on the eve of this Honor Flight adventure, I had the opportunity to interview Marcey, admittedly very excited, and a little nervous, about her trip.

"I was in the first round of women enlisted in the military in World War II," Marcey said. "Back then in 1943, there were no barracks for women, no uniforms for women. I enlisted in the Marine Corps, and was assigned to boot training at a college, Hunter College, in New York, since there was no training camp for women.

"I remember thinking back in 1942 when the Germans were bombing England that I wanted to help our country. Everyone wanted to help. And I knew I wanted to be a Marine. They are the best people – I knew they would defend me. It was just the week before I left for duty that a women's uniform was designed and made available for me."

Marcey was first sent to Iowa where she worked in recruiting, was assigned some public speaking, and had "escort duty" for celebrities.

"That term had a different meaning back then," Marcey clarifies. "I even met Hop-Along-Cassidy and Charles Bronson.

"I was just 23, and was constantly being told to be a lady. Men weren't used to women in the military. I already knew how to be a lady!"

Soon proving herself, Marcey was recommended for officers' training school at Camp Lejeune in North Carolina and commissioned as a second lieutenant. While stationed in Philadelphia, and having proved her ability to function as a lady with strength and dignity, she was assigned to model the recently designed women's officer uniform.

Eventually she was sent to the Pentagon in Washington, D.C., where she worked in the classification of war zone photographs.

"I wish I could have stayed in active duty longer," Marcey reflects. "After my discharge, I enlisted in the Marine Corps Reserve and was commissioned as a first lieutenant.

"The entire time I was in the Marines, I kept asking to be sent to Alaska. I was told there was no place for a woman Marine there. 'You can't go.' So I decided to get more education and got a Bachelor's and Master's degree and became a reading consultant. That eventually provided the opportunity for me to come to Alaska in the 1970s, and I taught in several schools here."

Not one to sit still, she joined the Prospectors Club, traveled with them to 36 countries, became a master gardener, and worked many years as the lead gardener at the Anchorage Senior Activity Center. 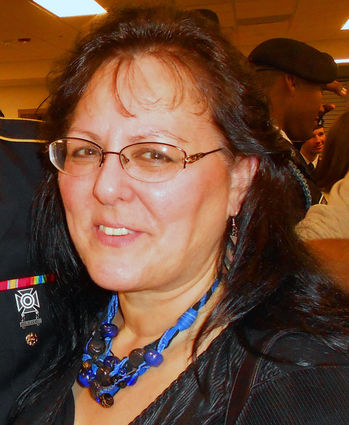 "I was good at drafting lots of groups to help me," Marcey states. Maria adds that Marcey restored seven gardens at the center and became a member of the ASAC board of directors.

"Marcey very much deserves this Honor Flight experience," Maria adds. "It's meeting veterans like Marcey with their amazing stories that helps me love my job as chairperson of the center's Senior Veterans Group. Knowing them encourages me to do more to bring them together, to help them network and find the resources they so deserve."

One more thing needs to be mentioned. All this care and energy going into doing things to help veterans like Marcey? Maria does it all as a volunteer.

"Don't ask me how many hours I put into this," Maria says, laughing. "I couldn't tell you. I do it out of respect for people like Marcey. It's an honor to put together the center's Senior Veterans Week."