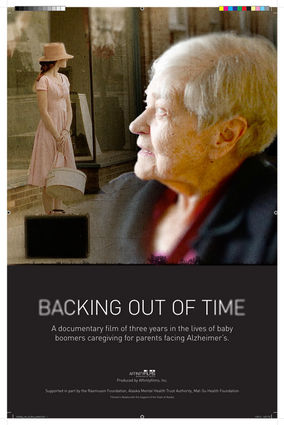 "Backing Out of Time" will show Nov. 12 at the Bear Tooth Theatre in Anchorage.

If you are a baby boomer caring for a parent with ADRD (Alzheimer's Disease and Related Dementia) or simply feeling daunted by the prospect, you won't want to miss "Backing Out of Time," a new film on the subject that will be shown Nov. 12 at the Bear Tooth Theatre in Anchorage. The hour-long documentary chronicles the challenging last years of the disease as seen through the grace and eyes of family caregivers and seeks to provide a road map and some normalcy to the experience. Alaska has the fastest growing senior population in the United States and at least one in nine of our seniors will be diagnosed with the disease.

In 2011, Affinityfilms' director Mary Katzke, a locally recognized filmmaker who often draws her material from pressing social issues close to her, began rolling her camera on close friends who all seemed to be consumed with facing parental decline at the same time. She eventually narrowed her focus to those families whose parents were struggling with ADRD in addition to regular age-related challenges because the emotional component when loss of cognition occurs is even more challenging.

As expert Tena Alonzo, Director of Education at Beatitudes Campus in Arizona, explains in the film, "Alzheimer's is the only disease in the top ten which is not preventable, treatable, or curable. We know that unless another illness takes your life first, this disease will claim it."

Backing Out of Time features five Alaskan families all choosing varying manners of caring for their parents. Greta Artman decided that it would be best if she went Outside to her mother's home in Tennessee to care for her. Marietta Hall moved her mother into her family home. Ramona Duby's father happily and proudly spends his time in the local Pioneer Home.

"It was important to show that there is not one simple answer," filmmaker Mary Katzke explains. "This is a journey without a road map and we hope this film will provide some insights that could be useful, as well as a lessening of anxiety around what is likely to be one of the more difficult challenges you will face as a baby boomer."

Last year, 33,000 Alaska caregivers provided 37 million hours of unpaid care valued at $466 million. The cost to the caregiver becomes increased when we also note healthcare expenses for the caregivers themselves in Alaska in 2012 was $26 million higher than for Alaskans who are not caregivers.

"While the majority of us realize our parents are getting older and will need care, most of us wait for a crisis such as a fall, or other accident to launch us into action," says Anchorage assisted-living facility manager Theresa Brisky, noting there are waiting lists at all ADRD facilities in Alaska. Understanding what may lie ahead, and knowing steps to take to ease this life-impacting disease may influence decision-making about one's own family and future, she says.

The documentary was made possible through grants from the Rasmuson Foundation, Alaska Mental Health Trust Authority and Mat-Su Health Foundation. The film will be used to increase public awareness of the caregivers' journey as well as to inspire preparation through planning.

The Nov. 12 screening at Bear Tooth will be at 5:30 p.m. Along with Affinityfilms representatives, experts from the film Theresa Brisky of Marlow Manor, Lisa Wawrzonek of Alzheimer's Resource Center, and Sharon Scott from the Mat-Su Health Foundation will be on hand to answer questions directly after the screening.

Katzke says the film will be shown at other venues around the state throughout the coming year. Visit http://www.backingoutoftime.org for information. The film will also be distributed to libraries and resource agencies and on sale at screenings and the website.