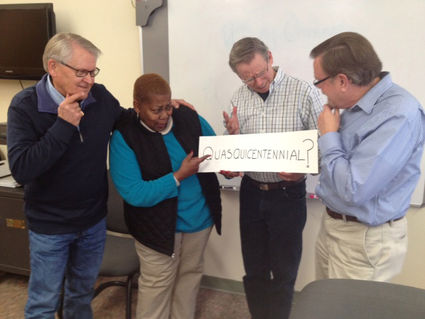 "Quasquicentennial?" Four members of the AK Child & Family anniversary committee puzzle over its meaning. They've come to know that this year marks the agency's quasquicentennial, or 125th anniversary. "Not many other agencies in Alaska can claim that," comments Denis McCarville, president and CEO of the agency. Left to right: Ernie Hall, former board member; Fannie Richardson, licensing coordinator; Tom Garlock, board member, committee co-chair; Denis McCarville, committee co-chair.

The New Year, 2015, represents a landmark year for one agency, AK Child & Family.

The history of AK Child & Family underscores not only its roots as a faith-based center meeting unique needs of Alaska's youth, but also the evolution of specific services designed to meet the changing needs of Alaskan communities.

Founded in 1890 in Unalaska as an orphanage, a mission of the Methodist Church, it was known as the Jesse Lee Home. In 1925, the agency moved to larger facilities in Seward to better serve a wider Alaskan community. After the earthquake in 1964 caused considerable damage in Seward, the campus was moved to a mid-hillside location in Anchorage, the Jesse Lee Campus, where it was named Alaska Children's Services (ACS). It was no longer an orphanage, but a behaviorial healthcare facility, providing psychiatric treatment and some residential cottages for children, many from Alaska's villages. The Methodist Church worked with both the Lutheran and Baptist churches to form ACS.

Recently, in July of 2013, the name was changed once again to AK Child & Family to better represent the range of services offered.

"We treat individual children and individual families," McCarville explains. "And we now offer a wide range of community-based programs to the children and families we serve."

"To recognize our landmark, our 125th year, an anniversary committee has been meeting for several months to plan commemorative events," he says. "It's comprised of some current board members, some staff, and some former board members and longtime Alaskans such as Al Fleetwood, Arliss Sturgulewski, Pat Abney and Ernie Hall."

At a recent anniversary committee meeting, Ernie Hall, reflecting on this long and rich history, commented, "I think most people, even those of us long associated with AK Child & Family, don't completely recognize the full significance of the agency, its impact."

Some of the highly successful residents of the Jesse Lee Home in Unalaska were Simeon Oliver, who went on to be a famous composer and pianist, and P. Gordon Gould, United Methodist minister and founder of Alaska Methodist University, now Alaska Pacific University.

Alaskans love their state flag, and its designer, Benny Benson, lived at the Jesse Lee Home in Seward. He created the design at age 13 in 1927, as the winning entry in an American Legion contest, and our Alaska State Flag was raised for the first time on July 9 that year at the Jesse Lee Home.

Another Seward resident as a child is author and educator Dr. James Lewis Simpson. Now age 90 and living in Oregon, his mind is still sharp, and he can easily tell lots of stories of arriving at the Jesse Lee Home in 1929 at age four. His doctorate is in education, and he has authored a book, "Jesse Lee Home – My Home."

Reaching out across the state

"We're working with what we call the 'natural helpers' – parents, grandparents, teachers, aunties – offering trainings, with the intent of helping troubled kids to remain in their villages, their homes. There has been a real lack of such programs. That has led to the Bethel project. Our partners are Yukon-Kuskokwim Health Corporation, the Association for Village Council Presidents, and the Division of Behavioral Health. The focus is on setting up treatment foster homes in villages."

Knowing how important it is to recognize the 125 years of agency caring for Alaskan children in need, the anniversary committee is planning at least three events throughout 2015.

• February 28, 2015 – The current children on the Anchorage Jesse Lee Campus will have an anniversary float in the Anchorage Fur Rondy parade, one that they have helped to construct. 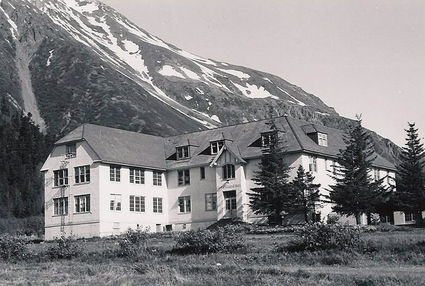 The Jesse Lee Home today, under restoration in Seward.

• July 9, 2015 – There will be an anniversary celebration at the annual Alaska Flag Day event, held to honor Benny Benson, who designed the Alaska State as a child in the Jesse Lee Home.

• September 16, 2015 – A huge birthday party is being planned. It was 125 years ago on September 16 in 1890 that a group of girls came to live in the Unalaska home, the first Jesse Lee Home residents.

"We are proud to carry on the tradition of care started at the Jesse Lee Home," McCarville says. "The organization has grown and evolved to meet the needs of Alaska's children and families over these 125 years. We will continue to do so as those needs change or as innovative treatments are developed – one child, one family at a time."