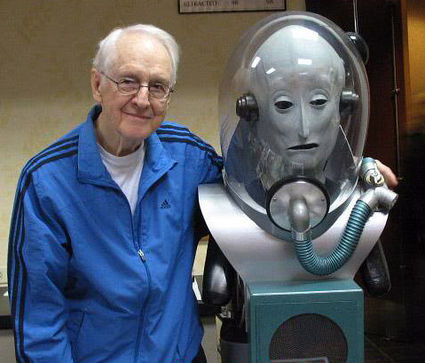 William Schallert at the Monsterpalooza convention in 2010 with a model of the creature from "The Man From Planet X."

If you have watched television since the 1950s, there's no avoiding William Schallert.

His distinctive, mellow voice and comfortingly familiar face have appeared on series ranging from "Father Knows Best" to "Desperate Housewives" and everything in between (see http://www.william-schallert.com).

"I've never added up the total, but I did work a lot," said Schallert, from his home in Pacific Palisades, Calif.

The tally of his television appearances is close to 300, with another 100 feature films – the first being an uncredited role in "The Foxes of Harrow" in 1947, which Schallert still vividly recalls.

"I had one line as a banker delivering a message to the New Orleans stock exchange: 'Gentlemen, gentlemen, the bank of the United States in Philadelphia has closed its doors!'"

Schallert says the scene was memorable because it called for another actor to shoot himself, but was unable to coordinate firing the gun with the gunshot sound produced by crew backstage.

"They couldn't see each other, so the shot would go off sometimes before or sometimes after the trigger was pulled. It got to be hysterical," laughed Schallert. "But they kept me over and I ended up getting three day's pay for one. So I figured this was a great way to make a living."

In the beginning, Schallert says roles came slowly, but by 1959 he was hot.

However, the uncertainty of series work could be unsettling.

"I knew the show was coming to an end, and was concerned what would happen," he said of The Patty Duke Show. "Fortunately I started doing voiceover work in commercials and that really paid the bills for the next 20 years."

Schallert has been invited to sci-fi conventions due to roles in '50s film classics such as "The Man from Planet X," "Them," and "The Incredible Shrinking Man." He also guest starred in "The Trouble with Tribbles," one of the most popular "Star Trek" episodes.

But he says one of his favorite TV guest roles was in "Get Smart," where he appeared in several episodes as the very elderly and unsteady Admiral Hargrade, who would fall over at the slightest touch – an irony not lost on the 92-year-old Schallert, now coincidentally the exact age as his character during the 1968 season. 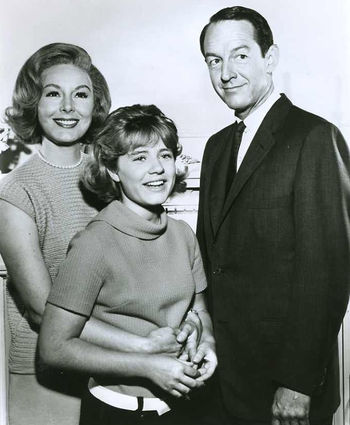 A publicity still of Jean Byron, Patty Duke and William Schallert from "The Patty Duke Show."

"The admiral was a charming character and looking back as an actor, I still think the ways I made him tumble over were funny," he said. "But now I am the age his character was supposed to be, and the actual falling down part isn't funny anymore. Falls can become serious health issues for seniors."

While Schallert says he has experienced some falls, his main health issue is his legs.

"I have peripheral neuropathy and wear braces," he said. "They help me stay balanced if I use a walker, but it's just easier to get around in a wheelchair."

Despite the physical limitation, Schallert doesn't entirely rule out working in the future.

"Although I'm more or less retired, if someone offered me a stage role and it was something I could manage, I'd probably do it," he says. "But working in film or TV would be too difficult now. Besides, I did my share."

Nick Thomas teaches at Auburn University at Montgomery, Ala., and has written features, columns, and interviews for over 500 magazines and newspapers.