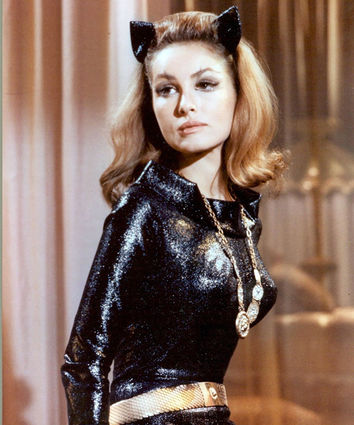 A publicity shot of Julie Newmar in her most famous role, the Catwoman.

This summer, Julie Newmar turns 82; but it only seems like yesterday she was prowling across our TV screens as the original Catwoman supervillainess in the '60s TV series "Batman."

In addition to her acting career, Julie has long taken an interest in gardening, beauty and health.

"If something bothers me, I try to live on top of it," the Hollywood beauty icon said from her home in Los Angeles. "Just let the joy in you come out and stay in love with life. That's the secret to aging well."

Julie also gives inspirational talks to women on how to enhance one's overall image including tips on make-up, hair, dress and voice. "Beauty has a lot of connotations to it and loving yourself is a very good place to start. We can all be more marvelous."

Aside from Catwoman and numerous other TV roles throughout her career, Newmar appeared in over 30 films working with greats such as Kirk Douglas, Gregory Peck and James Mason.

"I'm of Swedish descent, so having a Swedish girl play an Indian could only have been done in Hollywood 40 years ago," she said, recalling an unexpected visitor to the set.

"We spent two months on location in Arizona and Utah. At the time, Robert Kennedy was running for president and he and his entire entourage dropped in one night and had dinner in a tent with us. I sat next to him and remember his wife trying unsuccessfully to convince Gregory Peck to read some poetry."

Eight years earlier, in "The Marriage-Go-Round," Julie was cast closer to her ancestry – as a teenage Swedish blonde bombshell attempting to seduce James Mason.

"He was a glorious actor, extremely generous and helpful. He looked out for me in my close-ups, making sure the light was on my face and shadows didn't fall on me."

But it was her role as the exotic feminine feline nemesis to the 'dynamic duo' in some dozen "Batman" episodes where Newmar's sex appeal sizzled on '60s TV screens. Her image still haunts many today.

"I still get a lot of fan mail from men," she said, quoting an excerpt from an online post:

"Julie Newmar is the fruit of one of those moments when God must have thought 'I'll give them a girl who will define female perfection so well, that they will always know what beauty is all about.'"

"Oh my," she added, sounding quite touched by the tribute, "that's so endearing."

Newmar is now endearing herself to another generation of fans since the "Batman" TV series was released on DVD last November, after being held up for years by legal wrangling. She also recorded commentary for the DVD's Special Features.

"Doing the interview caused me to focus on what the Catwoman character meant for my life," she said. "It's really a joy to have created something that people still remember me for. I never got any royalties from the series, but the popularity of the show over several generations has more than paid me back." 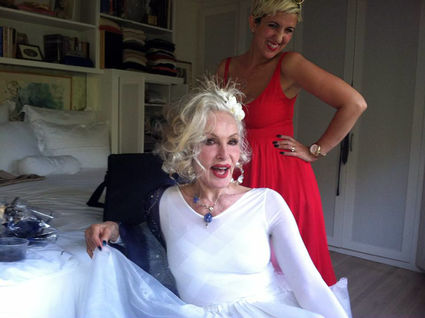 Julie Newmar on her 80th birthday celebrates at the Goo Salon as salon owner Molly Scargall looks on.

As for her memorable body-gripping Catwoman costume, Julie says she acquired the original "after a lot of hoopla," and donated it to the Smithsonian Institution.

"It was like a long-sleeved, long-legged leotard made from black Lurex," she recalled. "It clung to the body, but was very easy to get in and out of. It really looked smashing!"

As she continues to share some personal general lessons of life and beauty tips on her web site, julienewmar.com, Julie hopes her advice will help others to look and feel "smashing," too.

"The importance of looking and feeling well is clearly important to an actor," she says. "With the right attitude, you can be a great beauty at any age."