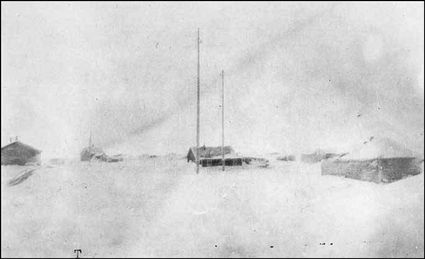 Before the Internet and cell service became synonymous with instant communication, Alaska's remote villages relied on a military network of telephone-telegraph radiophone stations to relay messages. Only a few cables reached a few Alaska cities back in the mid-1900s, so messages from these Alaska Communication System stations were transmitted to and from radiophone stations scattered all over the territory. With no roads and no other forms of communication, these radiophones were the lifeline for bush Alaska.

Every bush community had many antenna poles sticking high into the air, and often more than one battery-operated radio set in several homes. Radio waves hummed every evening as interested listeners tuned in their sets on every schedule, which they knew by heart, according to an article in Alaska Call in September 1959.

The health of those living in remote regions of the territory often depended on messages sent and received by the dedicated radiophone operators to doctors and hospitals, which were few and far between. In fact, only two doctors and one dentist, in Bethel and Dillingham, practiced in the 1,000 miles between Nome and Adak on the Aleutian Chain.

The Alaska Native Service Hospital in Anchorage had its radiophones on a daily schedule. Every day the call went out: "This is ANS Hospital, and the doctor is ready for the traffic."

The doctor then called each station on the network, listened to reports about old and new patients, tried to diagnose issues and gave medical advice. He then signed off until the next day.

This radiophone system not only was a critical link in providing medical advice from doctors, but it also was instrumental in saving lives when emergencies arose.

A teacher in one remote coastal town recalled just such an event for the Alaska Call, when he and a villager attempted to get medical help for a man with a broken leg late one night.

"This is an emergency message. A man with a broken leg needs immediate aid. Notify the 10th Rescue Squadron for help," they called out.

They did not receive any calls back, so they kept up their shout-outs well into the early hours of the morning. Just as they were thinking that their radio was not working properly, they heard a knock on the schoolhouse door and another villager entered.

"They heard your message. Iliamna and other stations repeated it also," he told the schoolteacher, adding that a rescue plane was coming.

When the plane had not arrived by noon the next day, the teacher was about to send out a message when he heard an announcement.

"This is the 10th Rescue Squadron plane. We are coming in but will be unable to land. A helicopter is following us. Tell us if the man still needs help."

The pilot then instructed the teacher how to let the helicopter crew know if the injured man still needed assistance.

"Get some people to form a cross on the beach if no help is needed, or form a circle if help is still needed," the pilot said.

The plane then swooshed over the beach, and when the pilot saw the people standing in a circle, he flew in lower and dropped a message with instructions on how to prepare the injured man for a helicopter pickup.

Soon a chopper sat down on the beach. The villagers carried the man on a stretcher to the beach, where he was attached to the side of the helicopter and then flown to the hospital.

The days of the radiophone may be gone now, but they have not faded from the memories of many rural Alaskans.