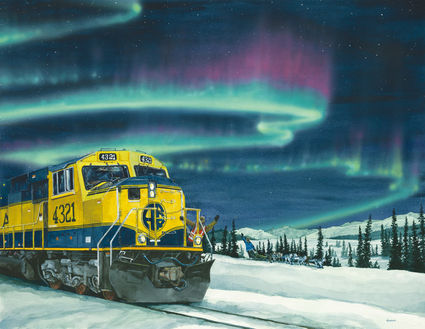 "I find endless inspiration in the natural world. In my artwork, I attempt to capture slices of the enormous beauty surrounding us, throwing in some humor along the way," said Vukovich.

His railroad painting included clear Alaska icons as a means to underscore Houston as a very Alaskan community as it marks its 50th anniversary.

For the 2016 print, the Alaska Railroad asked artists to feature Houston, which was incorporated as a city in 1966, and which sits at the juncture of the railroad's existing main line and a rail extension to Port MacKenzie, a project that is well underway.

"In addition to showing the Houston area on a clear winter night and the spectacular aurora borealis, I wanted to showcase two of the very best ways to see Alaska - mushing a dogsled and riding the Alaska Railroad," said Vukovich.

During the Anchorage and Fairbanks events, the depot gift shops will be open to offer other items that feature the 2015 artwork (such as ornaments, mugs and coasters) along with other ARRC gifts and apparel. Following the signing events, prints, posters and pins will remain on sale at the Anchorage Historic Depot and the Fairbanks Depot, and may also be purchased online via the Alaska Railroad Gift Shop website at http://www.AlaskaRailroadGiftShop.com/. Samples of the gift shop items will be available at the Houston event. Signed and numbered prints cost $55, posters cost $30 and pins cost $5.

A native of Illinois, Jason Vukovich started his art education in first grade and kept with it for 16 years, earning a Degree in Sculpture from the University of Illinois. Soon after graduation, Vukovich joined the Army, which transferred him out of the flatlands and into mountain territory, beginning with his first station at Fort Lewis, Wash., followed by tours of duty in Georgia, Europe, Egypt / Middle East, Afghanistan and Central Asia.

As a decorated infantry officer, he spent six years active duty and seven years Army Reserve before leaving the military in 2013. That same year he moved to Alaska, a mountain haven he dreamt of even as a child. He currently works as a Control System Designer for Doyon Anvil in downtown Anchorage. His spare time is consumed with family and creating art.

His artwork has been shown across the United States and in British Columbia and Vukovich regularly participates in Anchorage's First Friday art openings. Primarily a watercolor painter, he also works in acrylics, welded steel, and draws dinosaurs with his 6-year-old son Henry. For more on Jason, his artwork and exhibits/showings, follow JasonVukovichArt on Facebook and Etsy, or visit his Jason Vukovich Art website at http://vukovichart.blogspot.com.

Renowned artist John Van Zyle produced the first official Alaska Railroad painting in 1979. Since then, the annual tradition (except in 1984, when no painting was released) has evolved into a popular collector's item. More information about the Alaska Railroad's annual art print program, including history and images of prints from the recent past, are available on http://www.AlaskaRailroad.com/Corporate > Click COMMUNITY > then Annual Print Contest.