Portland! Paradise of coffee, beer, books and other delights 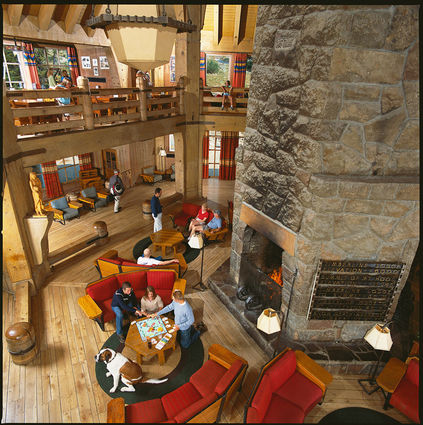 A National Historic Landmark, the Timberline Lodge at the 6,000-foot level of the 11,250-foot Mt. Hood is a timberframe wonder of massive beams. It was built by the Works Progress Administration during the Depression, and dedicated by President Franklin D. Roosevelt. "The Shining" with Jack Nicholson was filmed here.

I like to find places that have an Alaska connection, and Portland, Oregon is one. A favorite old dead guy of mine, Charles Erskine Scott Wood, spent some of his early years in Alaska, but left behind a mighty legacy in Portland.

In early 1877, when an infantry officer, he joined an expedition that had requested a military escort to climb Mount St. Elias, but after the group left Sitka, and without approval from superiors, Wood set off for Alaska. Ranging along the Southeast coast, he stayed in Klukwan, near Haines in the Southeast, and wrote about his experience in Century Magazine in July 1882, "Among the Thlinkits in Alaska."

After Alaska, he returned to duty to fight in the Nez Perce War, and is best known for transcribing Chief Joseph's famous speech that ended with "My heart is sick and sad. From where the sun now stands, I will fight no more forever."

In Portland, many of his good works are still enjoyed today - he helped found the Portland Art Museum, being a painter himself; he hired the sculptor Olin Warner to design the Skidmore Fountain in the section of the city that was its center in 1888; and the Portland Rose Festival was his idea.

This renaissance man and wide-ranging intellectual is a sort of the godfather of today's Portland with its quirkiness, irreverence and independent attitude. After all, he left his wife to run off to California with suffragette and poet Sara Bard Fields in 1918.

The city's nicknames include City of Roses, Bridgetown, Little Beirut, P-Town, Rip City and PDX. It's also known as Stumptown. The coffee here will send you into the stratosphere, it's so strong. My first and last cup had the same effect as a Turkish cigarette I once tried to smoke. Move over Red Bull.

Then there's the food. This is a foodie's paradise with its restaurants and food trucks - there's hundreds - and the inhabitants' insistence on fresh, locally sourced produce and meat called "farm to fork."

There is an HBO series in its sixth season called "Portlandia" that had an episode about a couple who went out to eat and had chicken, then traced it back to the farm where it was raised and had the farmer talk about its life before it hit the dinner plate. Hilarious.

I have never had a bad meal here.

For sweet stuff there's gourmet doughnuts, cupcakes and ice cream at Ruby Jewel. I think the Northwest has the most unique ice cream flavors I've ever tasted - like their ice cream sandwich lemon cookie with honey lavender ice cream.

You can travel through this town on your stomach.

Portland has a bus and rail system operated by TriMet, its name reflecting the three metropolitan area counties it serves - Multnomah, Clackamas and Washington. It's a system that's easily understandable and not too expensive. In fact it has an "Honored Citizen" one-day pass for those 65 and older, people on Medicare and those with disabilities for a mere $2.50.

The Portland Transit Mall at Fifth and Sixth avenues is a transit-priority corridor where buses and light rail trains converge.

It's a bike-friendly city where about 8 percent of commuters bike to work, the highest proportion of any major U.S. city and about 10 times the national average. In July 2016, Portland will have a bike-share program running with 600 bikes.

No visit to Portland is satisfying without a stop at Powell's Books. While well-known to book lovers, shopping the store for books online doesn't touch the experience of wandering through Powell's many levels and being guided by its friendly, knowledgeable staff at all of its four locations. One of the largest used and new bookstores in the world, it's open 365 days a year.

Mount Hood is not far away, and a gorgeous drive on Route 35 through the farmlands of Hood River Valley, where that chicken came from, as well as pears and apples, and then up to Timberline Lodge at an elevation of 6,000 feet.

Built in the Great Depression by workers and craftsmen of the Workers Progress Administration and the Civilian Conservation Corps, the lodge has the largest timber frame beams I have ever seen – massive. Sit by the fire and sip a drink or venture out to ski.

Rooms in November are $145 a night for two at http://www.timberlinelodge.com and the rooms are luxuriously rustic - some with fireplaces. There are specials available for mid-week stays. And always say you're from Alaska wherever you go – it greases the conversation and people are so interested in the state. Expect the sigh and the, "I've always dreamed of going to Alaska."

There's about 1,000 miles of hiking trails around Mt. Hood and Mt. Hood National Forest, but beware hiking unprepared, as the mountain's weather is fickle, but you already know about that.

Portland's airport is a destination of Alaska Airlines, but again, you probably already know that if you book tickets to the Lower 48. It's one of the best airports I've been through - large, airy and, like the city, it has good food. One-way fares in November are $278.

You can always save this trip for next year and the PFD special. 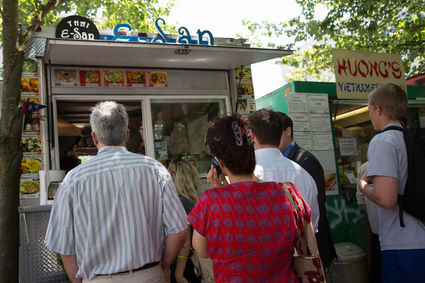 Portland has nearly 700 licensed food carts at various locations across the city.

But remember when Alaska Airlines gave PFD specials of two or was it three trips for the PFD amount? Sigh. We'll never see that again.