Don't waste that citrus: It can be frozen 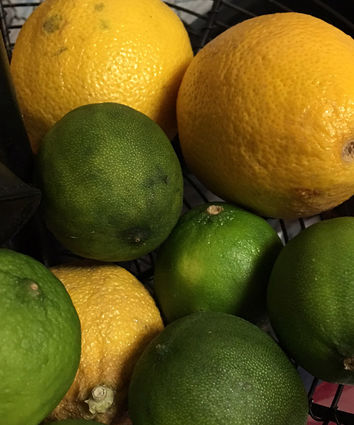 While buying bags of lemons and limes at a warehouse store can be less expensive, often many of them spoil before they can be used. There are several ways you can freeze them and get more of your money's worth.

The numbers associated with food waste are nothing short of staggering. Americans waste 35 million tons of food per year. This isn't just a loss of food that might otherwise feed us. Growing, harvesting, transporting and storing of that 35 million tons also consumes fuel and degrades our air and water.

The Food and Agriculture Organization of the UN and the National Resources Defense Council estimate that "as much as 40 percent of the U. S. food supply ends up in a dumpster." This is a 50 percent increase in food waste since the 1970s.

Individual consumers are probably responsible for slightly less than half of the waste and the environmental and social impacts of the larger picture are hard to grasp. But, here's a figure I definitely understand – individuals are throwing away more than $2,000 worth of food each year, about $40 per week! Fruits and vegetables account for about 52 percent of the wasted food.

I doubt that most seniors waste food to the tune of $2,000 per year. In the era when seniors were not quite so senior, home economics was studied and applied with more careful intent than today. Budgets were tighter and meal planning – a key to avoiding waste – was the norm.

My 91-year old mother tells me that she very carefully planned so that each member of our family of eight received the recommended amounts from each food group. She also says that she planned for smaller (aka healthier) portions than we expect today and she planned for quickly "up-cycling" any leftovers into a casserole, soup or stew.

I know that many seniors still use these essential, basic rules for containing food costs and preventing waste. Still, there has been at least one shift in food consumption patterns since 1970 – we are buying almost 30 percent more fresh and pre-cut fruits and vegetables, and even a conscientious homemaker may have difficulty keeping produce from spoiling.

Store, and have more

Storing fresh fruits and vegetables carefully can keep them looking and tasting fresh and out of the compost bin. Optimum storage conditions vary for each type but there are a few general guidelines to consider.

• Fruits and vegetables should only be washed and cut shortly before eating. Moisture from washing and cutting will encourage bacterial and mold growth.

• Keep fruits separate from vegetables in the refrigerator or on the counter top because ethylene gas released from fruits will cause vegetables to over-ripen and decay.

• Vegetables should generally be kept from drying out but they also need to breathe. Refrigerate packed loosely in plastic bags with perforations to allow some ventilation.

• Potatoes, onions, garlic and winter squash should never go in the refrigerator. Keep these separately in a cool, dry area.

• Fresh herbs, Brussels sprouts on a stem, celery, asparagus, kale and chard may keep well with their stems trimmed and placed in water. Cover loosely with a plastic bag and refrigerate. Change the water every couple of days.

Yes, you can freeze that

As a single person household, I do have a hard time using up produce before it spoils (I may one of those tossing $2,000 per year). A possible fall back is simply to put things in a freezer when you know that you can't use them fast enough.

Small amounts of vegetables can be quickly blanched, cooled and put into a freezer bag. Fruit can be frozen without blanching. Obviously these fruits and vegetables will not have the same texture as fresh but if you use them relatively quickly, they are likely to retain their flavor and be suitable for most purposes.

Freeze the whole fruit. freeze limes individually and then place in a bag together. Limes can be zested while partially frozen after you remove them from the freezer if you want to use the peel or they can be cut into wedges for a spritz of juice or to drop in a beverage.

Zest the lime. Place the zest into a small airtight container and freeze.

Juice the lime/lemon and freeze the juice in ice cube trays. The juiced lemon or lime can then be sliced into thin slices and frozen for use in sauces, cakes or beverages – although the juice is gone the flavor remains in oils in the skin

Slice the lime/lemon into wedges or slices. Then place on a tray on parchment or plastic wrap and freeze solid. Place in a bag or airtight container in freezer until ready to use.