Canada is more affordable than ever

Winter packages and exchange rate make for an inexpensive getaway 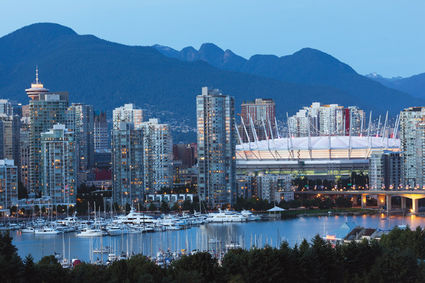 Vancouver's city skyline lights up at night. The city frequently wins accolades for its attractions and liveability.

The currency exchange with Canada has gotten even better – now it's 72 cents on the U.S. dollar. Oops, that was a couple of weeks ago when I first started on this column, but as of Jan. 20 it was 69 cents on the US dollar.

With the exchange rate this low, there are bargains to be had!

When I lived in Skagway, we passed through a thin sliver of British Columbia to get to the capital of the Yukon - Whitehorse, and the shopping wonderland that is the Canadian Superstore.

We also passed through BC to get to the airport, where ERA had a sweet flight from Whitehorse to Anchorage for a mere $350, where you'd fly over Wrangell St. Elias National Park, which is trans-boundary, connecting with Kluane National Park in Canada, and be gob-smacked by the immensity of it all.

Back then, BC's slogan was "The Magic and the Mystery,' now "Super, Natural British Columbia." I preferred magic and mystery.

The real mystery is, when the CDN trades higher than the U.S., why wasn't there a flight to Anchorage for all those Yukoners lusting for a good shopping spree? It's always puzzled me. Sorry - off subject.

Vancouver is recognized as a top city in Canada by Travel and Leisure Magazine, and was chosen as the world's "Most Liveable City" in 2010 by the Economist Intelligence Unit, which touts it has "one of the largest and most experienced country and industry analysis teams in the world." The city has been awarded eight times since 2002.

Packages are a bargain now

A Valentine weekend trip through Expedia is $488 on Delta for just the flight out of Anchorage, but play around on the Internet with Kayak or Expedia to find weekend specials that include flights and hotel starting at $565. With the big ticket items paid for, you have the city before you with affordable meals and shopping, thanks to the exchange rate.

Looking so much like the Hotel Chateau Frontenac in Quebec City, the historic Fairmont Hotel Vancouver is in fact another of the Canadian Pacific Hotels chain, built in 1888 in the heart of downtown.

Again through Expedia, this package is $988 for a luxurious stay in this hotel. Take a look at the amenities at http://www.fairmont.com/hotel-vancouver. Big surprise - this is a pet-friendly hotel. There's a pool, spa, health club, and yoga classes. Best of all, they serve a proper English High Tea in the afternoon.

Face it, English food isn't all that celebrated but the desserts are. Watch the British Baking Show on the Public Broadcasting System and see for yourself why the British love their sweets.

Go see and do 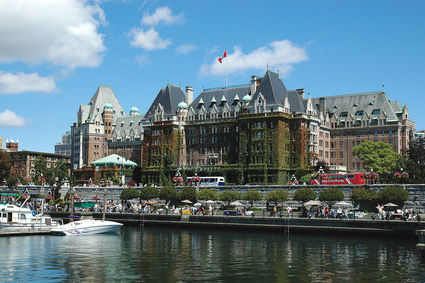 The marina and seawall in front of the Fairmont Empress Hotel in Victoria's Inner Harbor proves a popular spot for boats - and for foot traffic.

Like most major cities, Vancouver has its share of festivals, and there are a couple of good ones coming up.

The Talking Stick Festival, Feb 8-28, is a citywide celebration of indigenous performance and art. Visit http://www.talkingstickfest.ca.

There's a festival for every interest: see http://www.hellobc.com.

Or just drink a week away at the International Wine Festival, Feb. 20-28, that includes wine tastings and pairings, gourmet dinners and luncheons, educational seminars and culinary competitions.

Find out more, including the vineyards represented, at http://vanwinefest.ca.

Or you can just fly in and shop at the outlet at the airport.

No matter what you do, it's a bargain, while at the same time, you'll be supporting the economy of our next-door neighbors. Oh Canada!