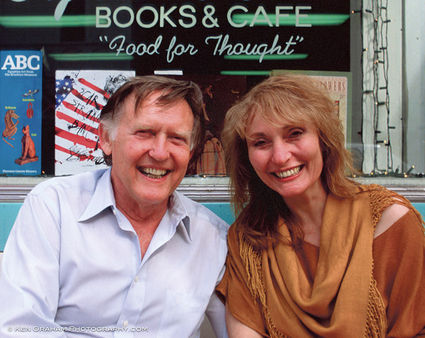 Sandy Harper, right, smiles with her late husband Jerry Harper outside Cyrano's Books and Cafe in this 1988 photo. The couple expanded the operation into a theater in 1992, providing Anchorage a home for live theater for decades. Now ready to retire, Sandy is putting Cyrano's in new hands.

If retirement means "to call it quits" or "pack it in," as my dictionary suggests, that is not at all what Sandy Harper has in mind. It is a time of transition for her, of new perspectives, as she hands over the lead position of producing artistic director of Cyrano's Theatre Company to Teresa Pond, representing a younger generation. Sandy calls this transition a passing of the torch and the beginning of a new era for Cyrano's, but since the theater has become very much a part of who she is, she will continue as creative consultant through 2016, not completely letting go.

Sandy founded Cyrano's with husband Jerry Harper back in 1992.

"It has always been a work of love," she states.

Asked what she has most enjoyed about Cyrano's, she beams. "It has made me feel alive! It has been something different, so unique to do. I have not been bored.

"We took on the challenge of putting up a new play every month. Through the Centennial last year, Cyrano's did a new play every week for 10 weeks. I'm especially proud of that. Looking back, I loved it all. Especially in the beginning, with Jerry."

She becomes quiet. "I'm admittedly ambivalent at the change. After all, I've lived this theater 24/7 for many years. I call it my baby. I'm excited about Teresa coming on board. Theater needs to attract the millennials. I'll exercise some influence through 2016, but I won't be a helicopter parent. By 2017, I think I won't be so directly involved. My hope is that the legacy of Cyrano's founders – Jerry and I – will live on there."

Letting go and living on. It's about passage and change, but not about retirement, certainly not about quitting, as Sandy sees it.

"Cyrano's board of directors and I have been preparing for this change for some time," she says. "Getting ready," she calls it.

"At a Foraker retreat over two years ago, the idea of succession was discussed. Dennis McMillan, then CEO of Foraker, was moving toward this same stage in his life.

"The Foraker Group works to strengthen Alaska's non-profits, for now and for the future. We developed a three-year succession plan. Year one we would look for an acting director candidate; year two would be the transitional year; year three would be the take-over. But we got ahead of ourselves. It appears that's because a promising candidate for this succession was already in the wings from the beginning of the process – Teresa Pond."

Teresa has long been well known to the Anchorage theater community. She'd served as executive director of Anchorage Community Theatre for many years, then gone on to work in theater in Pennsylvania and New York.

"It must feel like coming home to her," Sandy states, somewhat wistfully. "I'm proud to pass the torch on to her. She has the skills, passion and experience to lead Cyrano's into the next era while honoring the theater's established values and reputation."

The transition is not just for Cyrano's, but for Sandy personally. She reached a landmark birthday, age 75, this past August. A crowd gathered at the playhouse to honor her. She called 75 "a time between menopause and death" and proudly wore a T-shirt proclaiming in bold letters, "Inside every older person is a younger person wondering what the hell happened." She danced, she laughed, she radiated joy. She was in her element.

Sandy gave a toast "to all who create art" and especially to husband and Cyrano's cofounder, Jerry, who died in 2005. It was almost as if Jerry were there with her.

"He did it all for love," she said, raising a glass to everyone there. "To all in the spirit of Jerry."

Throughout the party, there was a hint of change, of things to come.

"My wish would be for more success for Cyrano's," she said "for a sustainable future for Cyrano's."

She then handed out a list announcing the plays for the 2016 season, plays that she had chosen. There were cupcakes with lit candles for everyone. As Sandy blew out her one candle, she added, "I hope all here will make the same one wish as I will make."

So what does Sandy wish for in her future? Certainly for anything but boredom or stagnation.

For Cyrano's, she wishes for more diversity on the board and on the stage. She hopes to see more woman authors and directors. She hopes for continued collaboration and coordination among the community's theater groups.

"It must be that way," she emphasizes. "One tide floats all boats. We must grow our audiences, particularly our younger audiences."

Personally, she hopes to keep walking. She walks the eight blocks to work and had a bad fall in November and wound up in the hospital and a rehab assisted living facility for a while. Certainly, a primary wish is for health – in mind and body.

"I want to make more memories with my grandchildren. That's very important. They are ages 18 and 22 now."

She has no plans for television watching. She doesn't own one. Instead she has a glorious view of Cook Inlet from her living room windows. 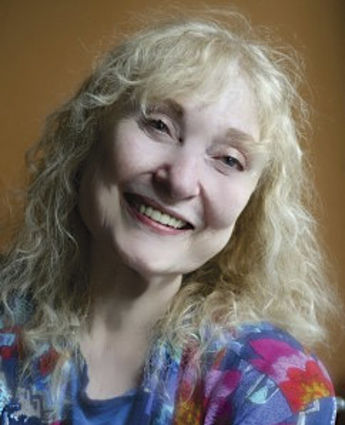 Sandy Harper has been a key player in Anchorage's theater community since co-founding Cyrano's Off Center Playhouse.

She is surrounded in her home by books and reading materials of all sorts. She hopes to write her own book, an archival history of Cyrano's, not just the theater, but the original bookstore as well. "It will be a walk down memory lane. The history is so rich, so full."

In doing this writing, a primary hope is to preserve the legacy of Jerry Harper. "When Jerry died, I knew he felt it was right to go on with the theater. In addition to being a fine actor and director, he was a kind man, a true gentleman. His favorite thing was to be a mentor to others, a teacher."

Sandy pauses, thinking of how important helping others was to him. "That's his legacy, and hopefully the legacy of Cyrano's."

Looking out the windows of her home at the wide-ranging view in front of her, Sandy smiles and adds, "And he had the most wonderful laugh."