Maple syrup flows and visitors flock for a taste 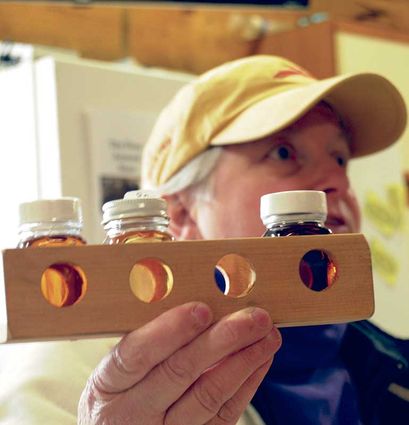 Mary Smith holds three jars of syrup up to the light. Each color corresponds to a certain grade, with golden offering a delicate taste, amber a rich taste and a robust dark amber.

Vermont is all about maple syrup and that's just fine with me. Here in the springtime, smoke fills the air from sugarhouses busily boiling the sap from sugar maple trees in vats over wood-fired boilers.

But much has changed in this cottage industry as maple-syrup-making hit the 21st century, and nowhere have the leaps in technology been so evident as on the Smith Maple Crest Farm in Shrewsbury, Vermont, where maple trees seven generations old twist toward the sky.

Jeff and Mary Smith continue on the farm that his ancestors started in the mid-1800s on 2,000 acres.

"The trees my grandfather tapped, he thought they would last forever, but with climate change they're just dying off," Jeff says.

His people also couldn't have foreseen the rough and tumble of the Vermont economy as it reinvented itself time and again.

The farm saw sheep until the price of wool plummeted after having cut most of the forest for pasture.

"I have no idea how they kept their houses warm-there was no woods left," Jeff says.

Then they turned to making cheese until the dairy business in Vermont was decimated by low prices. You can see the ghosts of those mighty red barns along backroads all over the state.

But it seems that now maple syrup and grass-fed beef can successfully support the Smiths.

Visitors and neighbors duck in and out of the small store to buy syrup and listen to Mary talk about grading and Jeff explain the process.

It's Jeff and three helpers that patrol the lines of food-grade polypropylene tubing, also called "lines," strung between the trees looking like a child's giant game of cat's cradle.

Maple sugaring has taken a giant leap since I was a kid and we tapped trees with a metal tap and hanging a bucket off it, remembering well the small amount of syrup it produced after much boiling.

Now it's high tech and stainless steel. The volume of syrup the Smiths produce requires an oil-fired boiler and an array of solar panels outside.

"We use up the electric rebate quickly," Jeff says. "We have six different electrical services, otherwise we'd be blowing the transformer all the time."

Jeff has parsed the expenses.

"When the wind is in the east, the syrup runs least," Jeff quotes an old farming saying.

Looking into the tank in the sugaring shed, even with the wind from the east, the sap is running slowly.

How many feet of line does the farm have, he's asked.

In 2016, the U.S. Department of Agriculture statistics showed Vermont to be by far the country's largest producer of maple syrup, producing 1.9 million gallons, up 1.4 million gallons from 2015.

An eye toward grades of syrup

Mary holds a container with three sample bottles of syrup up to the window. The tasting has begun.

With pickles offered to cleanse the palate between each taste, the grades of syrup range from golden with a delicate taste, amber with a rich taste, and dark amber with a robust taste. Each grade becomes thicker as the color darkens.

In 2014, Vermont switched to a new grading system because Vermonters understood them but not the average American.

"Vermont decided that people in Kalamazoo couldn't understand Vermont grades," says Mary. "The shade is all in the sap and how it reacts to the boiling. The soil the maple trees are in make a huge difference in taste too.

"There was a study by Middlebury College (VT) that lined up cups in front of a group of sugar makers, and if it was from some place different than what they were used to they said, 'Oh, that's awful.'" Flavoring comes from soils, just like with wine.

We had pancakes the morning after with the amber syrup we bought, and it was a memorable pancake.

The Smiths ship their syrup anywhere, go to smithmaplecrestfarm.com for a price list.

I thought I had invented a new kind of all-purpose marinade/stir fry sauce/salad dressing when I substituted maple syrup for honey in honey mustard dressing, but Vermont chefs had beat me to it.

It's so simple, just mix maple syrup and balsamic vinegar to your taste and shake it up and you can add some robust mustard sauce for a kick. I used to make this with olive oil, but you really don't need it. Great as a stir-fry or a marinade as it caramelizes whatever you mix it with.

Boil some with butter to a soft or hard ball test and use it on popcorn. I saw a cooking show here where they brought it to a boil and added heavy cream and poured it over ice cream.

Maple syrup has almost as much antioxidant value as carrots, has more nutritional value than any other sweetener, less calories than honey, and is low on the glycemic scale for those of you with diabetic or sugar sensitive health issues. Foods with a glycemic index of 55 or below are considered to be low glycemic foods, and pure maple syrup has a glycemic index of 54, whereas pure honey is 58 and table sugar 65.

The Vermont Maple Festival is hosted by the town of St. Albans, way at the top of the state, from April 28 to April 30, 2017. http://www.vtmaplefestival.org. 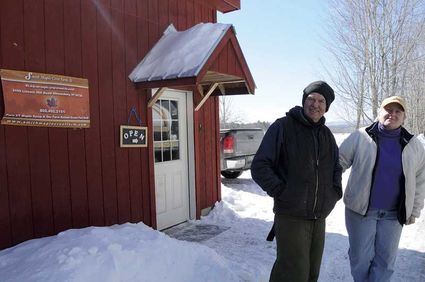 Jeff and Mary Smith stand outside their bright red barn at the Smith Maple Crest Farm in Shrewsbury, Vermont.

Located on Lake Champlain in northeastern New York, less than 100 miles from Vermont, Fort Ticonderoga on Lake Champlain was a strategic point of entry to Canada and the Hudson River Valley during the French and Indian War.

On May 10, 1775, Benedict Arnold of Massachusetts joined Ethan Allen and the Green Mountain Boys of Vermont in a dawn attack on the fort, capturing the British garrison of 50. As the first American victory of the Revolutionary War, the Continental Army went away with highly useful artillery for future battles. The troops retreated into Vermont along the road passing what would become the Smith family farm.

You can stay in the quaint double entry Colonial inn next to the farm that was built in 1808 and served as a tavern for 20 years, then turned into a B&B in 1969. Go to sleep to the wind in the maples and the lowing of the cattle. And of course, pancakes with your choice of maple syrup for breakfast.