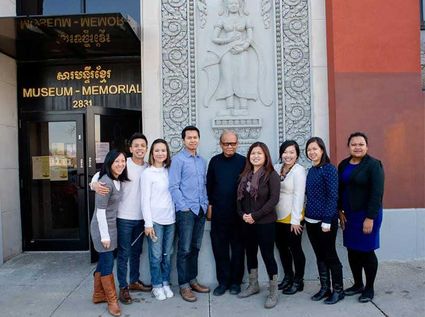 Staff and leadership from the Cambodian Elders Association of Illinois and the Southeast Asia Resource Action Center.

Editor's note: This is the sixth article in a series from the Diverse Elders Coalition, looking at different segments of the senior population.

Cambodian American elders face many challenges similar to those of other low-income older Americans, such as poor nutrition, limited transportation and poverty. But they also face some very specific challenges as survivors of war and genocide, said Kaoru Watanabe, associate director of the Cambodian Association of Illinois (CAI).

"A lot of times, as these seniors' cognitive competency declines, we see their genocide memories start to come out," she explained last week, when members of the Diverse Elders Coalition (DEC) were in town for a national onference on aging. "Some suppressed them a long time, over many years, but as they begin to show signs of dementia or Alzheimer's, the memories start coming out unpredictably."

Watanabe added that this can be difficult for family caregivers: "One of them told me, she takes care of her in-law, who now constantly talks about their experience during the genocide."

Nationally, 19.3 percent of Cambodian American seniors live under the federal poverty level, compared with 9.5 percent of all elders in the United States, or twice the national average. Watanabe added, though, that CAI's seniors program has worked to address the elders' very specific needs beyond those of many other groups of ethnic elders: culturally, linguistically and as survivors of war.

CAI was founded by Cambodian refugees in 1976, in the middle of the brutal Khmer Rouge regime in Cambodia that forced the country's entire urban population into reeducation camps and prisons.

In only four years, the regime wiped out around 20 percent of the country's population through starvation, torture, and murder in what is now known as the Cambodian genocide. Hundreds of thousands of Cambodians eventually made their way to the United States as part of the largest resettlement of refugees in U.S. history in the wake of the conflicts in Vietnam, Laos, and Cambodia.

CAI houses the National Cambodian Heritage Museum & Killing Fields Memorial, which commemorates the more than 2 million lives lost during the Cambodian genocide and celebrates the resilience of refugee communities.

Today, CAI serves approximately 130 seniors with in-home services like preparing meals, running errands, and house cleaning, as well as health education and access. Often the caregivers are family members who would otherwise be forced to take care of their aging loved ones without financial support or training.

Data is sparse on post-traumatic stress disorder in the Cambodian American community, but a 2005 study (online at http://tinyurl.com/m2rjrex) of 490 Cambodian refugee adults in Long Beach, Calif., found that 99 percent had suffered near-death from starvation, and 54 percent reported having been tortured.

Over half have PTSD

Also, that study found 62 percent suffered from post-traumatic stress disorder (PTSD), and half were diagnosed with major depression. Among all U.S. seniors, the PTSD rate is between 1.5 percent and four percent. Also, research on how to manage PTSD in older populations is scant.

The effects of PTSD may be subtle. Watanabe explained that in her conversations with survivors, many Cambodian survivors will explain their pain psychosomatically, in the form of physical ailments.

"They'll say, 'My neck hurts,' and so on. So we start with those complaints and move on to more mental health kinds of things. Instead of saying 'I am depressed,' many people say, 'I think too much.'"

She continued, "We also really have to look at the effects of secondary trauma on caregivers and Cambodian staff. One of our staff members who work closely with survivors told me that when she has to help with her clients' mental health, she has nightmares, because she also lived through the genocide."

Although Cambodian seniors can access basic services across the Chicago area for other health and service providers, these providers often call CAI for advice and assistance on providing culturally-relevant care, she said.

But programs like these are being threatened at every level of government. In his 2016 budget, the governor of Illinois completely eliminated the Immigrant Services line item, which supported CAI's interpretation and translation services, as well as services to help community members access public assistance programs.

At the federal level, the Trump administration's proposed budget would eliminate the Community Development Block Grant and the Community Services Block Grant, grants to states that support in-home care programs like the one that CAI provides. The Republican-proposed American Health Care Act would also eliminate the Racial & Ethnic Approaches to Community Health (REACH) program, which funds community-based, culturally-appropriate health interventions.

Watanabe said despite the challenging political environment, CAI will continue to do everything they can to serve their Cambodian seniors. "Being here in this building with the Killing Fields Memorial downstairs, you really feel the deep meaning and significance of our work for these survivors. The work really gives you a sense of purpose."

Mari Quenemoen directs communications and development at the Southeast Asia Resource Action Center (SEARAC). This article is adapted with permission from her blog on the Diverse Elders Coalition website. DEC is the national coalition of groups representing the needs of ethnic, immigrant and LGBT elders.