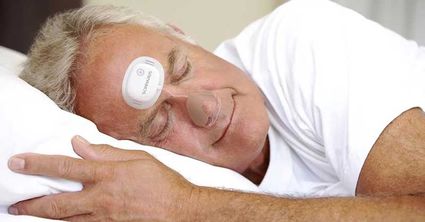 A new disposable patch may make it easier to detect sleep apnea, especially for people unwilling or unable to go to a sleep lab.

New treatments for diagnosing and treating sleep apnea may soon make it much easier to combat this problem. Scientists have now come up with a disposable diagnostic patch that effectively detects obstructive sleep apnea across all severity levels.

The device is called SomnaPatch and it weighs less than one ounce and records nasal pressure, blood oxygen saturation, pulse rate, respiratory effort, sleep time and body position. The team developing this product reports that the patch is highly accurate and could help those individuals who are unwilling or unable to go to a sleep lab to get diagnosed.

"Our study provided clinical validation of a new wearable device for diagnosing sleep apnea," said principal investigator Maria Merchant, PhD, CEO of Somnarus Inc. "It was most surprising to us how well this inexpensive miniature device performed in comparison with in-lab sleep studies."

Simultaneous polysomnography and patch recordings from 174 subjects were included in their analysis. An additional home usability study found that 38 out of 39 users were successful in activating the diagnostic patch and collecting at least four hours of sleep data while relying only on the instructions included with the device.

"Most home sleep diagnostic devices are difficult for patients to use and are disruptive to patients' sleep," said Merchant. "Our study showed that this wearable home sleep monitor is very comfortable, easy to use and does not negatively affect sleep."

Consumption of dietary fiber from breads, cereals and fruits may independently influence the likelihood of aging successfully over 10 years, according to researchers in Australia. It has been known for decades that a high fiber diet provides important gastrointestinal benefits. Now, it appears it does much more than that.

Scientists at The Westmead Institute for Medical Research explored the relationship between carbohydrate intake and healthy aging in more than 1,600 adults aged 50 years and older. They found that out of all the factors they examined, which included a person's total carbohydrate intake, total fiber intake, glycemic index, glycemic load, and sugar intake, it was the fiber that made the biggest difference to what the researchers termed "successful aging."

Successful aging was defined as including an absence of disability, depressive symptoms, cognitive impairment, respiratory symptoms, and chronic diseases including cancer, coronary artery disease, and stroke. Study investigator Bamini Gopinath, PhD, who is with The Westmead Institute for Medical Research, said these findings are very important and point to a simple way to improve quality of life in older adults.

"Out of all the variables that we looked at, fiber intake, which is a type of carbohydrate that the body can't digest, had the strongest influence," said Gopinath. "We found that those who had the highest intake of fiber or total fiber actually had an almost 80 percent greater likelihood of living a long and healthy life over a 10-year follow-up. That is, they were less likely to suffer from hypertension, diabetes, dementia, depression and functional disability."

This study backs up similar recent findings by the researchers that highlighted the importance of a healthful diet and healthy aging. In a previously published study, Westmead Institute researchers found that adults who closely adhered to recommended national dietary guidelines reached old age with an absence of chronic diseases and disability, and had good functional and mental health status.

Walking away from kidney cancer

It may be possible to walk away from some types of cancer. A new study is suggesting a connection between a sedentary lifestyle and risk of developing kidney or bladder cancer. The findings extend a line of inquiry that has already revealed a connection between chronic inactivity and heightened risk for both ovarian and cervical cancer.

Researchers at Roswell Park Cancer Institute in Buffalo, New York, conducted a study with 160 kidney cancer patients, 208 bladder cancer patients and a control group of 766 people of the same ages who did not have cancer. They found significant positive associations between lifetime recreational physical inactivity and cancer. Overall, there was a 77 percent increased risk of developing kidney cancer and 73 percent increased risk of developing bladder cancer. They found similar risk exposure among both obese and non-obese study participants, suggesting that the connection between inactivity and these cancers is not driven by obesity.

The data add to the growing body of evidence that physical inactivity may be an important and independent risk factor for cancer.

"We hope that findings like ours will motivate inactive people to engage in some form of physical activity," said senior study author Kirsten Moysich, PhD, who is a cancer prevention expert at Roswell Park. "You don't have to run marathons to reduce your cancer risk, but you have to do something, even small adjustments like taking the stairs instead of the elevator."