By Pam Cravez
For Senior Voice 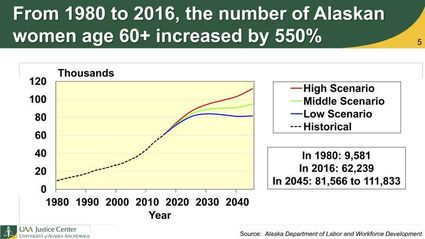 One in nine Alaska women aged 60 and older experienced psychological or physical abuse in the past year, according to Dr. Andre Rosay, UAA Justice Center director. Results are based upon the Alaska Victimization Survey (AVS), an annual survey conducted from 2010 through 2015 by the Justice Center and funded by the Alaska Council on Domestic Violence and Sexual Assault. Dr. Rosay is the principal investigator for the survey.

The surveys measured psychological abuse and physical abuse. They did not measure other forms of abuse, including financial exploitation.

A detailed article on Dr. Rosay's findings will be in the summer 2017 edition of the Alaska Justice Forum. To receive the free publication: https://www.uaa.alaska.edu/academics/college-of-health/departments/justice-center/alaska-justice-forum/subscribe.cshtml

Pam Cravez is the editor of the Alaska Justice Forum.