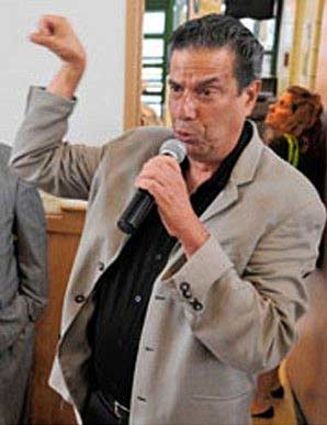 Members and guests of the Bartlett Political Forum, aka the Bartlett Club, in Anchorage were entertained by none other than Jon "Bowzer" Bauman during a presentation July 20. Yes, he is still around and continues to entertain. He parodied "Good Night Sweetheart," singing "Goodnight Trumpcare, well it's time to go," and played a piece by Schubert that he said his mother enjoyed hearing.

Most in the audience remembered  Bauman's popular Sha Na Na character, "Bowzer," a gangly, slender-armed greaser in a muscle shirt. Jon brought along pictures of himself, showing his signature pose as "Bowzer". After the meeting, members posed for pictures with Bowser and received personally autographed pictures.

Bauman has expanded his focus beyond entertainment to include political activism. As cofounder of the group Senior Votes Count, and president of Social Security Works, he travels the country advocating for senior rights and helping elect leaders who will protect Social Security and advance the rights of Older Americans. He spoke at this event on protecting Social Security and Medicare and actively fighting those who want to change or abolish the programs.

In the 2012 election cycle, Bauman served as a spokesperson for the National Committee to Preserve Social Security and Medicare.

His blend of celebrity presence combined with understanding both senior issues and "show business" is uniquely invaluable in helping empower seniors and give them a voice in the political arena. His talk was enjoyable and inspiring.

Flyers were distributed containing the telephone numbers of our Alaska Senate delegation. "Bowzer" encouraged his audience to call their senators. "You have incredible power," he said.

Bauman lives in Los Angeles with his wife, Mary. Their two children, Nora and Eli, are graduates of Columbia University.

The Bartlett Political Forum meets at noon every Thursday at the Anchorage Senior Activity Center. There is a low-cost buffet lunch provided by the center. The invited speakers present on a wide range of topics. It is an open public meeting. All civil viewpoints are accepted and appreciated.