Ships, bridges and barriers: My family in California 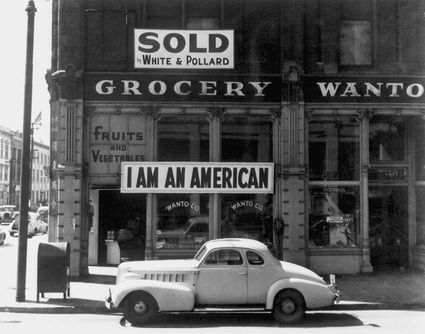 Dorothea Lange's well-known photo of the Wanto Company sign "I am an American" was hung on the grocery store located at 8th and Franklin in Oakland. The author's grandparents knew the family as other business owners in Japan Town.

Editor's note: This article is part of a monthly series from the Diverse Elders Coalition, focusing on different segments of the senior population.

My grandfather passed through the Golden Gate - where the Golden Gate Bridge would later be constructed - in October 1903. He arrived in the time between the Chinese Exclusion Act of 1882 and the Immigration Act of 1924. By 1924, the U.S. government had completely blocked the immigration of people it deemed undesirable, including Asians, Arabs, people with disabilities, formerly incarcerated people, people with a history of physical or mental health issues, and the poor - along with anarchists and polygamists. In addition, the U.S. severely limited the number of African immigrants and tried to control the number of Southern and Eastern Europeans, and European Jews. All of this in order to "preserve the ideal of American homogeneity."

Today, some things have changed: our government is not supposed to discriminate against people based on their religion or country of origin, and a narrative has developed of the U.S. as a melting pot. But some things have not changed: our country is still afraid of immigrants - what they bring and what they represent. The hoops that people must jump through have become much more rigorous than the pro-forma questions my grandfather was asked in Honolulu.

My grandfather arrived in Honolulu with fifty cents and no command of English. I can only imagine what it took my grandfather to survive, work and eventually build a business. Still, it makes sense that he chose to create his own employment as someone who probably faced job discrimination. Being enough of a risk-taker to leave home, family and country translates into being entrepreneurial.

"Immigrants today are more than twice as likely to start a business as native-born citizens . . . Despite accounting for only about 13 percent of the population, immigrants now start more than a quarter of new businesses in this country." (Inc.com, February 2015)

However, after the Japanese attacked Pearl Harbor and President Roosevelt issued Executive Order 9066 in 1942, all of his career plans went out the window. Dad described it as a terrible time. Oakland and the entire country turned against the Japanese American community for no good reason. Newspapers, labor unions, government officials and business owners - afraid of Imperial Japan - turned against law-abiding U.S. citizens of Japanese descent and their Japanese-born relatives.

My grandfather lost his restaurant and my dad's family was sent to Tanforan Racetrack with what they could carry. Plywood boards were put down in the horse stalls and families were housed there. Dad lived at Tanforan for four months and then he and his family were sent to Topaz Concentration Camp in Utah - which he described as incredibly dry and dusty - to live in Army-type barracks.

I think about Dad strolling across the bridge in the spot my grandfather's ship had passed in 1903 - the year this poem was mounted at the base of the Statue of Liberty, the "mother of exiles."

The wretched refuse of your teeming shore.

Send these, the homeless, tempest-tost to me. . ."

I share this quote in the hope we will all truly take these words to heart.