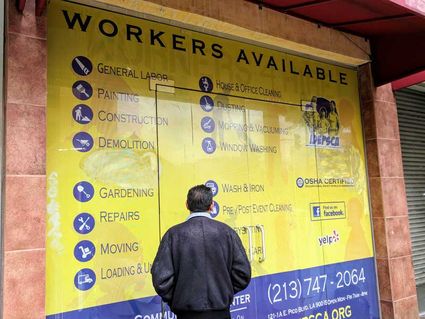 Every morning, Eduardo arrives at a day laborer center in Los Angeles to pick up his crew for the day. Depending on the working schedule, the 52-year-old man takes between two and four men to work in different projects, mainly in construction.

"Sometimes other [day labor workers] laugh at me because I often take the older men," said Eduardo. "But I take them because they have less opportunity to be hired," he said. For many years Eduardo also worked as a jornalero, a day laborer doing different types of work, such as gardening, construction, loading, plumbing and other physical work.

One of his most loyal workers is Gerardo, 55, who arrived in the United States 12 years ago and has also worked mainly as a jornalero.

Gerardo, who did not want to provide his last name, said he left his wife and four children in Guatemala. "Well, one comes [to the U.S] to leave poverty and because without my help, my children over there [in Guatemala] wouldn't be able to succeed," he said.

Studies have revealed that people in the United States depend mainly on three types of resources for retirement: Social Security, private pensions and personal savings or assets. That approach is especially difficult for those who are undocumented and working on unstable jobs such as day labor.

Gerardo said that from time to time he thinks about his future and hopes, like many other immigrants, to return to his native country. But he is not convinced that will happen.

"My wife tells me to come back to be with them, but I tell her to give me at least until 2018, because I have to get the two young ones to be able to graduate from school," Gerardo said. Besides supporting his children and wife, he also helps provide for his mother.

Although a large number of undocumented immigrants work and pay taxes in the United States, they are not eligible to receive a Social Security retirement pension or any other federal benefit. They are also excluded from receiving assistance from programs such as the Supplemental Nutrition Assistance Program (SNAP, formerly known as the Food Stamp Program), non-emergency Medicaid, Supplemental Security Income (SSI) and Temporary Assistance for Needy Families.

Social Security requires that workers pay into the system from their earnings for at least 40 quarters before they can receive benefits. Unfortunately, many immigrants, such as the undocumented and the visa holders, do not meet eligibility requirements,

explains a study from the Social Security Office of Retirement and Disability Policy.

What are their options?

Day labor centers throughout the U.S. offer help to laborers. They provide information such as about their rights as workers and fair wages-

regardless of their immigration status-or where to find English classes or basic health services. Sometimes help comes from nonprofit organizations or private companies offering legal assistance, free food, or tokens for the bus.

Several Latin American consulates help in a limited way. For example, the Consulate of El Salvador offers different forms of protection, such as assistance in repatriation to the country for vulnerable citizens, such as those who are sick, injured or minors.

Silvia Villegas, in charge of special cases at the Mexican Consulate, said she is primarily in charge of helping people obtain their identification documents, such as a passport, registration or voter credentials, so that they can eventually carry out other procedures either in this country or in case they decide to return.

"Many people have lost contact with their relatives, and it is very difficult to prove their identity," explained Villegas. "I have had people who have been living here for 40 years or more and do not have any form of identification." 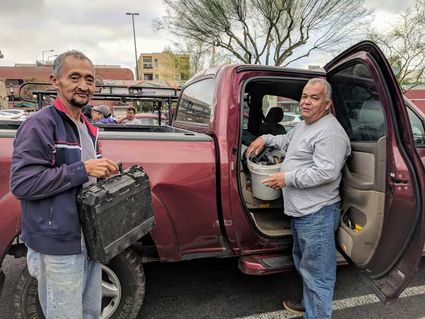 Undocumented immigrants are eligible for emergency Medicaid (the state and federal program called Medi-Cal in California that provides health coverage to low-income people). However, undocumented immigrants are only covered for serious medical situations. That may include birth, for instance, but not long-term care for chronic diseases, regardless of whether or not the condition is life threatening.

Migrant day laborers interested in learning more about their options can visit centers such as IDEPSCA, the Central American Resource Center, the Coalition for Pro-Immigrant Rights of Los Angeles (CHIRLA) or each immigrant's consulate, depending on the person's nationality.

This is an ongoing series of stories provided by the Diverse Elders Coalition.

Jacqueline García wrote this article for La Opinión in Los Angeles with the support of a journalism fellowship from New America Media, the Gerontological Society of America and AARP.