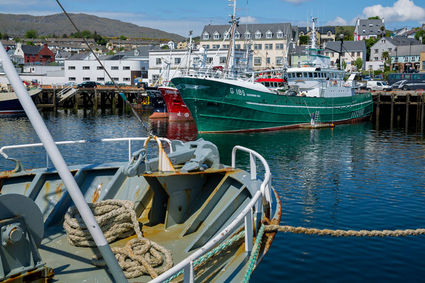 In a world seemingly full of dangers, it might be best to turn to countries where there have been civil wars and its people moved on to a more stable society. One place would be Ireland, the ancestral home to many Americans.

Aside from peace there's also the convenience that English is spoken here, there are familiar foods and they brew most excellent beer.

It was not always so. "The Troubles" (1969–1997) was a conflict between nationalists (mainly Roman Catholic) and unionists (mainly British or Protestant), ending in a peace process in 1994 and a ceasefire.

On one trip there in 1972, "The Troubles" were still active and as we hitchhiked through the country drivers boasted of their activity with the Irish Republican Army. I didn't believe them until we were picked up by a man with a box of what could have been rifles in the back and a lunch box that weighed far too much to be a mere sandwich.

We were heading to Northern Ireland and the driver knew exactly where in the bend of the road to stop and let us out without being seen by customs officials. Turns out the hostel had been bombed and customs was on its eighth mobile home office.

While Dublin has much to offer, the real Ireland lies in the hinterlands. For Alaskans, the rocky, rough coast of County Donegal will be familiar, and you will identify with the county's motto, "Up here it's different," due to its geographic isolation.

Do not be put off by rural residents spitting on the ground when they see you coming down the road as it's a way to ward off evil spirits that you may bring with you.

Sheep wander across this landscape that will remind you of tundra and warm fires of peat will warm you after a brisk walk.

Two ranges of mountains make this the most mountainous region of the country - the Derryveagh Mountains in the north and the Blue Stack Mountains in the south, with Mount Errigal at 2,457 feet as the highest peak in Donegal.

For under $90 (Ireland uses the Euro now at .77 per U.S. dollar) Bunbeg Lodge in Gweedore, County Donegal, (http://www.bunbeglodge.ie) offers a view of the Atlantic with beaches to walk, fish to catch and, of course, pubs to visit.

Well-known throughout the world for its quality and beauty, Donegal tweed has been hand-woven, much as a cottage industry, for centuries from local sheep and dyed by native plants such as blackberries, fuchsia, gorse and moss. It'll keep you warm in Alaska winters and be a reminder of your trip.

The one thing it struck me about the country is that I had never seen more shades of green in a landscape. Take a train or a rent a car (remember they drive on the left side of the road, so be sure you can handle it) and see for yourself.

Ireland's best-known beer is of course Guinness, which had early ads boasting of its healthy effect - "Guiness Is Good For You."

A few things to note about this brew. It doesn't travel well and beer aficionados will be surprised by the sweet yeastiness of it when taking a tour of the Dublin brewery. Get tour tickets at https://www.guinness.com/en-us/search/?q=brewery%20tour.

Getting it from the source is definitely the best.

The pour is important-three long slow pours with the glass at an angle to prevent too much foam and not disturb the taste is key. All bartenders in Ireland pour it this way.

Please do not demand to know why it's at room temperature as I overheard one American question. The warmth brings out its full taste.

Music is as big as politics

Walk into any bar anywhere in Ireland, whether it's only a four-seater in some remote village or a fancy Dublin pub and you'll hear two things - music and lively political discussion.

I took the ferry from Dublin to Liverpool, England, and the bar was sold out before we even threw the lines and all night long there was singing.

The Irish have great voices and if you're invited to "Give us a song" it's best to have a republican song at the ready (Irish republicanism is an ideology based on the belief that all of Ireland should be an independent republic).

"Rising of the Moon" is always a favorite. They would always shout out "Ah she knows that one!" and take over so my less-than-lovely voice would be drowned out.

It will delight them and you'll be rewarded with extra pints. 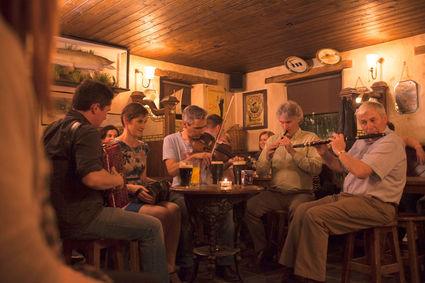 The Irish have a lively pub life and a rich musical tradition.

And do jump in on political discussions as the Irish keep up on the goings-on outside their peaceful, green world.

Salute them by raising your pint and saying "Sláinte!" or "good health" in Irish Gaelic. (Learn to pronounce it here https://www.youtube.com/watch?v=mZMBvqosoGI.