Age no barrier to Iditarod dreams 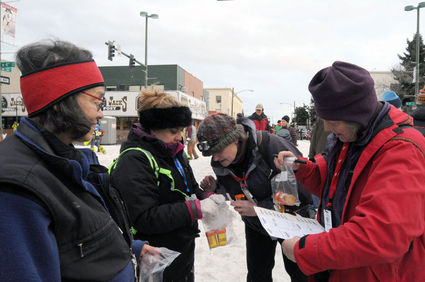 Kathleen Henderson, 66, Dawn Ulrich Spitzer, 59, and Jane Powers, 70, from Minnesota, C.J. Oktem, early 40s was all she'd say, from Turkey, and Lee Lowsery, 72, of "north of Fairbanks," collect samples for testing at the race start.

It should have surprised no Alaskan that "middle-aged" Mitch Seavey of Sterling took first place for a third time in the 2017 Iditarod.

His win represents the spirit of a state where, no matter how old you are or where you're form or what your gender is, if you can hurdle the qualifying races and your dogs love you enough, you get to run the toughest race on the planet.

He walked away not only with bragging rights for possibly years, but $71,250 and a brand new Dodge Ram pickup truck and $2,000 and 25 pounds of Bristol Bay salmon from the Bristol Bay Native Corporation for the Fish First award for being first to arrive in Kaltag.

Sadly for fans, Iditarod favorite and four-time champ Lance Mackey, 46, of Comeback Kennels in Fairbanks, Alaska, did not run in 2017, citing health concerns, but hopes to run in 2018.

Volunteers from nearby and faraway are the race's backbone

Four women were peering into a bag of what looked like urine at the start of the 2016 Iditarod International Sled Dog Race in March. They weren't asked how they obtained it.

This is a job that not many would volunteer to do, but these women come every year to do the tests on the sprint dogs facing close to 1,000 miles of trail.

Kathleen Henderson, 66, Dawn Ulrich Spitzer, 59, and Jane Powers, 70, from Minnesota, C.J. Oktem, in her early 40s was all she'd say, is from Turkey, and Lee Lowsery, 72, of Fairbanks, said the race is the highlight of their year.

Those baggies? They were testing tor steroids, non-steroidal anti-inflammatories, and testosterones.

The Iditarod really does run on people who pitch in transporting food and straw for the dogs, preparing meals at checkpoints, veterinarians from around the world checking dogs' health along the trail, dog handlers, security - at least 1,700 according to the Iditarod Trail Committee.

The race has many moving parts to it that the public never sees. It's more than the mushers and their dogs, it's also the many who support family members running the race.

Brent Sass, 36, owner and founder of Wild and Free Mushing in Eureka, Alaska, has been racing and training huskies for 13 years. Originally from Excelsior, Minnesota, his volunteer is his father Mark, 63, who comes up to help as he has done for 10 years, meeting him at every checkpoint.

"I follow him on races, I'm his scheduler," Mark said.

Brent did make it to Nome in 20th place in a little over nine days and eight hours in 2016, but although signed up for the 2017 Iditarod, Brent withdrew from the race after scratching in the Yukon Quest in February 2017.

Martin Buser, 57, always a favorite, looked tired at the ceremonial start on Fourth Avenue in 2016. Turns out he had pneumonia but was still hopeful that he'd make it to Nome.

"I'm feeling good, ready to go," Buser said. "I'd be lying if I didn't say I was nervous about what's was coming up around the next corner and over the hill. I just want to get to Nome with all these beautiful dogs. I'll drop dogs if I need to.

"I want to be to Ruby and running the Yukon River as I did when I was 50." 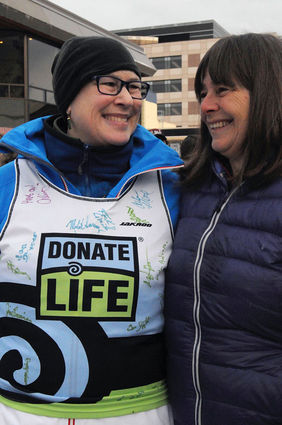 He told Senior Voice at the 2016 start in Anchorage that he'd like to just run the race, enjoy it and not focus so much on winning.

In 2016, Jan Steves, 60, a Red Lantern winner in 2012, set out from Anchorage championing organ donations but scratched after about a day on the trail. She did not enter in 2017.

Diane Bedell, 51, of Ballard, Washington, a heart transplant recipient was riding behind her in a tag sled as they wound their way through Anchorage.

"I've never been on a tag sled before," she said, even though she has a 20-year history with sled dogs.

The Iditarod was always on her bucket list, she said.