I now pronounce you man and wife 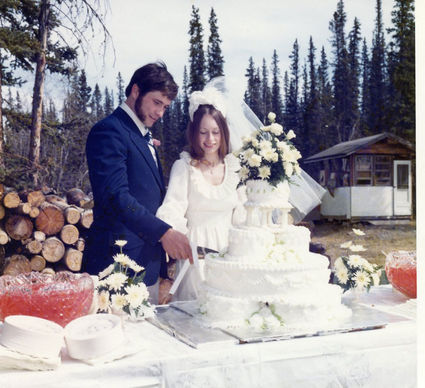 The logistics were tricky for an outdoor wedding in Glennallen, but the author's event came together memorably.

It was 45 years ago this month that I married Gary in the front yard of my home in Glennallen. As the wedding party stood and all the guests sat facing toward the grove of poplar trees, frogs croaked and ducks swam in the pond off to one side. In other years the trees were leafed out and the grass was green, but that year spring was slow. But, I didn't care. I wanted to get married in May and the 26th was the last Saturday of the month.

At times during the preceding months, when preparing for a wedding seemed overwhelming, Gary and I were tempted to carry out our original idea of eloping, or just having a small family wedding. But, several community members told us we couldn't get away with that and so it turned out the whole town was invited. Mom and I put the wedding together while she completed her end-of the-year school teaching responsibilities and I finished my senior year of high school.

Flowers were ordered from a shop in Anchorage and a local lady agreed to make the cake. I made my wedding dress out of white dotted swiss material and my sisters each made their floor length pink dresses. Gary planned to wear the suit he already owned. No one even thought of tuxedoes for the guys.

The evening before the wedding, the organ was hauled in by trailer and set up in the yard, covered with a tarp and plugged into an extension cord. We endured wind and spitting rain as we rehearsed, but afterward gathered at the home of another local lady, where she and the cake maker had prepared a wonderful rehearsal dinner for 20. The doctor's wife created three beautiful doll cakes featuring a bride and two attendants dressed in white and pink.

The morning of the 26th dawned with sunshine and a slight breeze and soon the house and yard were buzzing with final preparations. Over 100 folding chairs were set up, as well as reception tables for the food, cake and gifts. Dad shut the goose in the greenhouse so it wouldn't interrupt the ceremony, but he left the ducks free to swim on the pond.

Guests from New York, California, and Petersburg, Alaska, had already arrived, but that morning more out-of-town guests drove in. Dad had cleared willow brush from the field to the right of the driveway for a parking area. Friends from Anchorage arrived with the flowers.

Shortly after noon, I glanced out the living room window and noticed a guy standing in the yard. Upon second look, I realized it was Gary! Between a fresh haircut and a new blue sports coat and white slacks, I hadn't recognized him.

About 15 minutes before the 2 p.m. ceremony, the organist began playing to gather everyone to the chairs. One of Gary's good friends sang two songs and then the pastor married us. He accidentally left out the vows, but we did each say "I do" at the appropriate time. After being pronounced man and wife Gary picked me up and carried me down the aisle to the sound of murmurs and laughter.

We greeted our guests in the receiving line, cut the cake and I threw my bouquet. Sometime during the reception, Dad's order of honeybees arrived from Anchorage. Gary had instigated this project, so feeling a little responsible, he disappeared off into the back woods with Dad and the bees to help get them settled.

After photos were taken, all the still-wrapped gifts were loaded into our 1969 Volvo, which had been decorated with shaving cream and tin cans, thanks to my 11-year-old brother. Gary and I changed clothes and were given a grand send-off to our new life together, which began with the five-hour drive to Anchorage.

That was the beginning of a lasting relationship -- for better for worse, for richer for poorer, in sickness and in health. Forty-five years have come and gone with many changes, but springtime always returns – even if it is sometimes late - and the poplar grove, the pond and the frogs remain the same. Happy Anniversary, Gary!