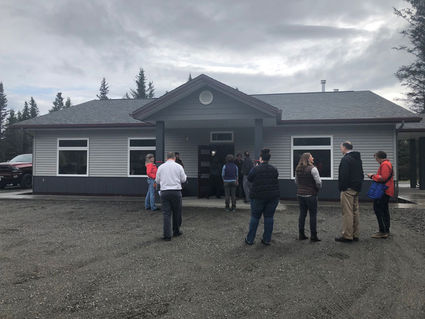 Visitors in Homer check out the new offices of Kenai Peninsula Housing Initiatives, Inc., at a grand opening event in May. The non-profit organization has several housing projects under construction in Homer and Kenai.

Fifteen years after it hired its first staff member, Kenai Peninsula Housing Initiatives (KPHI) held a grand opening for its brand new office in Homer on May 16. The housing non-profit also announced that it will open a Homer Community Housing Center in the same building, and will break ground on six new apartments this summer on an adjacent lot.

"We know there is a real need for affordable housing in Homer, and are excited to not only be building a six-plex this summer, but also to be offering a community housing center where people can come to find out where housing is available," said KPHI executive director Steven Rouse. "We envision the center as a place where Alaskans will be able to take housing classes, hold meetings, do research and apply for housing."

KPHI's office, located at 4201 Ronda Street, offers modern workspace for KPHI's four Homer-based employees. In the other half of the building, there will be a large meeting room outfitted with computers, audio-visual equipment and other resources to help support anyone who is looking for housing on the Kenai Peninsula. The new office building and community center is being funded with KPHI general funds and by the Alaska Housing Finance Corporation's (AHFC's) Neighborhood Stabilization Program. Under the program, KPHI purchased a foreclosed property, fixed it up, then sold it and reinvested the proceeds to build its new office and the community center. A Tier 1 grant from the Rasmuson Foundation will help to pay for furniture, technology and equipment for both the office and the Housing Center.

KPHI also announced that it will break ground this summer on a new multi-family housing project, Crane Hill Apartments. When completed in February 2019, KPHI will offer two one-bedroom, two two-bedroom and two three-bedroom apartments to people who earn 30, 50 or 60 percent of the HUD determined Area Median Income (AMI). Depending on income, size of family and the size of the apartment, rents will run from $656 a month to $1,000 per month. Two ground floor apartments will be equipped for individuals with mobility and/or sensory impairment. Priority for renting will be given to veterans, the homeless or those on the public housing wait list.

KPHI anticipates it will start taking applications for the six apartments sometime around Christmas 2018. 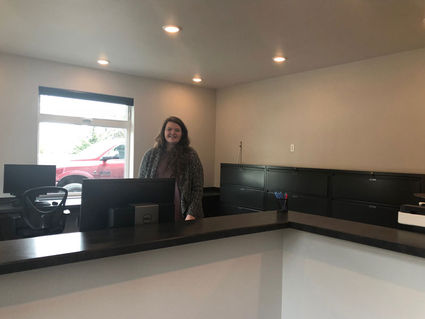 Administrative Assistant Libby Lissner is the first person you will see when you walk into the new Community Housing Center and Kenai Peninsula Housing Initiatives offices.

In April, KPHI opened its first development in Kenai, a six-plex called Clear Pointe, which is very similar to the building planned for Homer. KPHI also announced in April that it was starting the first phase of Kenai Meadows, a six-unit senior housing project next to Clear Pointe. Construction is expected to be complete by February 2019. That development will provide two one-bedroom apartments and four two-bedroom apartments with accommodations for mobility and sensory impairments. One of the senior housing apartments will be income-restricted for an individual or couple who earns 30 percent of the AMI.

For the last 20 years, KPHI has been providing low-income, senior and special needs housing to residents of the Kenai Peninsula. KPHI currently manages more than 100 units of affordable housing in Homer, Seward, Soldotna, Ninilchik and Kenai. Learn more at http://www.KPHI.net.