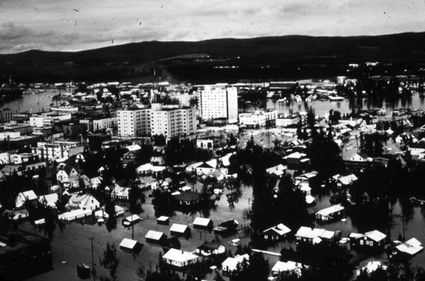 Fairbanks businesses and homes flooded in August 1967. The flood put Fairbanks and Nenana under as much as nine feet of water.

Water in the Chena River inched up ever higher during July 1967 when 3.34 inches of rain, instead of the normal 1.84 inches, fell on Fairbanks. The city's 30,000 residents weren't too worried, though. Most were in the midst of the Alaska Purchase Centennial, celebrating the U.S. purchase of Alaska from Russia in 1867.

But when 6 inches of rain fell during a period of five days, the river did crest. And on the evening of August 14, it spilled over its banks at 18.6 feet. The massive amount of water drove unprepared residents to their rooftops and eventually forced thousands from their homes as it destroyed basements, furnaces, furniture and precious family belongings overnight.

The city became a five-mile-wide lake of deep, sludgy water filled with lost property covered with sewage and garbage. The flood knocked out power, communications, water and sewer utilities. It washed away roads, bridges and rails, too, which isolated Fairbanks and made rescue efforts difficult.

Several of those caught in the flood in downtown took refuge in the upper floors of the eight-story Northward Building. People with apartments made room and shared dry living spaces with those in need. They pooled food and cooked large meals for the crowd gathered in Fairbanks' only "skyscraper."

Throughout the rest of the city, rescuers piloted riverboats and other small craft as they skimmed across the muddy water looking up and down streets for people and pets. They ferried most of those found to the University of Alaska, which sat on College Hill, safe from the flood.

University President William R. Wood didn't hesitate to announce that his institution would welcome all who needed shelter. And as soon as the radio station spread the word, "the trickle of refugees toward campus suddenly became a torrent," according to a story about the flood that appeared in the July-August 1967 issue of Now in the North.

"They came at first on foot, by bicycle, by pickup truck, car and camper – by about any means that had wheels," the article reported. "Many arrived only with the clothes they wore."

As floodwaters continued to fill the land, more refugees started to arrive by air. Giant Eielson Air Force Base H-21 helicopters and other military and civilian choppers rescued people from their rooftops and brought them to a heli-pad set up on a parking lot south of the Bunnell Building on campus.

People used canoes and rafts to float around inside stores to find food, but they only picked up canned food due to health risks from the floodwaters. There were no labels on the cans, which led to some very interesting and creative meals, residents later said.

The flood, which killed seven, caused more than $200 million in damage to businesses and homes (more than $1.5 billion in 2018 dollars). The extensive destruction from the flood helped inspire Congress to pass a national flood insurance program.

It also passed the Flood Control Act of 1968, in accordance with recommendations from the U.S. Army Corps of Engineers, which became the largest federal civil works program in the state. And experts say a 1967-type flood probably will never happen again, thanks to the Chena River Lakes Flood Control Project.

The National Civic League awarded Fairbanks its coveted All-America City award in 1968 for how it responded and rebuilt following that devastating flood.