Connecting across generations to support elders 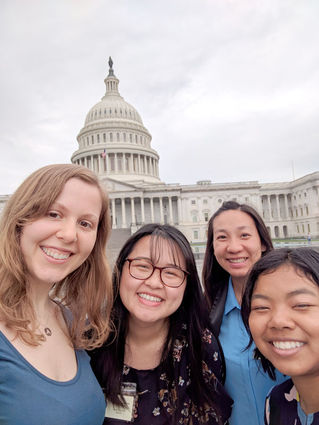 Jenna McDavid (left) with LAT participants Amanda, Yia, and Dianne in front of the U.S. Capitol.

Whenever I tell people that I work in the field of aging, it raises more than a few eyebrows. I started working with the Diverse Elders Coalition before my 30th birthday, and even though I'm a few years older and wiser now, it still feels like few of my peers are thinking about aging, much less how they can support the generations who have come before them. And yet, it feels like all of us, regardless of age, should be thinking about aging and elders all the time.

There seem to be silos that keep younger and older people apart, despite the evidence that intergenerational connections benefit everyone. Some intergenerational programs have really inspired me, like SAGE Table, which connects different generations of LGBTQ people to share a meal and conversation. (The next SAGE Table is happening nationwide this November, so sign up today!) And I have long-admired the Leadership and Advocacy Training program from the Southeast Asia Resource Action Center (SEARAC), which brings together a cohort of Southeast Asian Americans every summer to teach, to learn, to heal, and to advocate for their communities. This summer, I had the great honor of attending SEARAC's 2018 Leadership and Advocacy Training (LAT), where I facilitated a group of fledgling health policy advocates and got to witness some of the most powerful and groundbreaking work I've ever been a part of.

This year's LAT brought together 44 participants ranging in age from 21 to 50, representing 14 states and 33 congressional districts. The first two days of the training were intense, full-day workshops in large and small groups where participants discussed the Southeast Asian American legacy, what it means to be a part of the largest resettled refugee population in U.S. history, and what we owe to the parents and grandparents whose bravery and strength allowed each participant to be in that room. Intergenerational connections - including intergenerational trauma - were discussed at every stage of the training, and there were more than a few tears as advocates talked about their hopes for themselves and future generations of Southeast Asian Americans.

I was a facilitator for a small group of participants who were focused on healthcare advocacy, and on day three of the training, each participant had a meeting on Capitol Hill with their Congressional representative. In our meetings, we emphasized the importance of protecting the Affordable Care Act - and how the ACA and Medicaid expansion have made a huge difference in the health of Southeast Asian American communities - and the value of passing legislation that acknowledges and addresses the unique needs of diverse communities, such as the Health Equity and Accountability Act. The incredible participants in my group told personal stories about the high rates of depression and PTSD in the elders in their communities and families, the value of honoring and protecting immigrant and refugee communities, and how more support is needed to ensure the success and longevity of future generations of Southeast Asian Americans. Even in meetings where our demands were not particularly warmly received, these inspiring participants stood their ground and passionately defended their communities' right to thrive in the United States.

As someone who works in advocacy full-time, one of the best parts of the LAT for me was watching this group of people transform from nervous and uncertain about their ability to talk with their members of Congress to strong, confident advocates. Each of the three participants in my group truly owned the room when they were talking with their Representatives, and I am honored to have been a small part of that transformation. I hope each LAT participant takes what they learned during this week in D.C. and brings it back to their families, their communities, and their futures.

Since 1999, SEARAC has graduated more than 1,000 advocates from 22 states through its annual Leadership and Advocacy Training program. That's 1,000 more people who understand their place in history and are using those histories to create a better next chapter for the generations to come. Next year, the LAT program will celebrate its 20th anniversary, and I look forward to being in the room again with these amazing advocates as they find their voices and share their power with the world.