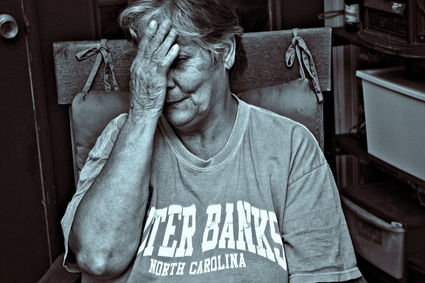 Older women are not only just as likely to be abused, they're also more likely to be ignored when signs of abuse are evident.

It's a phrase I hear when talking to older women through Humble Warrior, a free compassionate listening service aimed at providing support to those in distress. While the women recognize they are miserable in their marriages, they often believe that if they aren't being hit, they have no legitimate reason to leave. Somewhere along the line, they've come to accept that emotional, verbal and financial abuse are just part of the marital package.

Indeed, for many older women, domestic abuse is still a relatively new concept. The majority did not see physical abuse become "criminalized" until much later in their lives, and the concept of emotional or financial abuse remains even more foreign.

For those struggling in a relationship in which you feel demeaned or dependent, please know this: "not hitting" is the minimum baseline for what anyone should expect in a relationship - not a reason to stay in one. And yes, emotional, verbal and financial abuse are legitimate reasons to leave.

Domestic abuse is not just about causing physical pain; it's about power and control on the part of the abuser. In fact, many relationships that begin with physical abuse may change to emotional and financial abuse later in life because the abuser no longer needs to physically assault his partner to control her. The National Domestic Abuse Hotline defines abuse in many non-physical terms:

Demeaning and embarrassing you, in public or private

Controlling money and your financial "allowance" in the relationship

Making all decisions without your input

Forbidding you from working or volunteering

Threatening to leave you

It's almost impossible to know the prevalence of domestic abuse later in life, largely due to the lack of research on the topic. In fact, in some cases, social service agencies do not even include those older than 59 in their domestic violence surveys.

When domestic abuse is depicted in the movies and media, it often focuses on younger women or mothers of young children, creating the false notion that older women are unlikely victims. The truth is, older women are not only just as likely to be abused, they're also more likely to be ignored when signs of abuse are evident:

Health care professionals have been shown to attribute signs of physical or emotional abuse to aging, rather than abusive relationships.

Health care professionals may know about the abuse but attribute it to an abusive partner's deteriorating health condition, such as dementia- without offering support to the victim.

Law enforcement personnel may choose not to press charges against elderly abusers because they see them as a lower risk factor or unfit for prison.

There's a reason that older women have traditionally accepted abuse within their romantic relationships: We as a society have taught them to do so.

Breaking the cycle of domestic abuse in older women

The following are a few ways older women can take back their power and begin to recognize - and fight - signs of domestic abuse in their lives.

Get real. Familiarize yourself with modern definitions of abuse and be honest with yourself about whether there is abuse in your marriage or partnership. Note the ways it has impacted your life. Name it. Acknowledge it. Allow yourself to grieve the parts of your life you have lost to it.

Speak up. Find a counselor or support group where you can share your story and find empowerment from others who have experienced and overcome similar challenges.

Define your options. It's possible that you don't feel comfortable choosing divorce or living on your own in this season of your life due to physical or financial limitations. You still have options. For instance, an assisted living community could provide the safety and shelter you need to recover your physical or emotional health. Women's shelters, Adult Protective Services (APS) or friends and family may also offer short-term solutions. Make a list of possibilities and talk to a trusted friend about which might be best for you.

The truth is, women are living longer than ever. You may have 20, 30 or 40 more years to live on this planet. You still have time to be happy. You still deserve a season of joy. Domestic abuse does not need to be an acceptable part of your life. You can write a different ending to your story.

Jess Stonefield is a contributing writer on aging, technology, mental health and the greater longevity economy for publications such as Changing Aging, The Mighty and Next Avenue.

This column is part of an ongoing series by the Diverse Elders Coalition, highlighting different segments of the senior population.