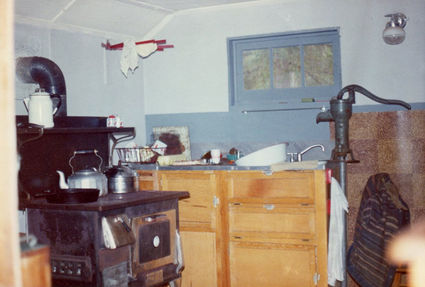 The McMichaels' kitchen, with its wood cook stove, in 1979.  When the family moved out five years later, the kitchen was totally remodeled except for the cook stove.

My husband Gary burst in the door of our cabin, peeled off his outer gear, and said, "I volunteered us to cook the turkey in our wood cook stove. They'll do everything else on their Coleman stove. Thanksgiving dinner will go on as planned!"

He had just returned by snow machine from checking on our neighbors, and said he would go back to their house with the sled in a while to fetch the bird. We all had awoken to no electricity that snowy November morning back in 1979.

Gary and I had only lived in this lakefront cabin on Kenai Lake for three months, along with our three-year-old son and year old daughter. We and two other retired couples lived fairly close to each other one and a half miles off the Sterling Highway near the end of the road in the Quartz Creek Recreational Area.

Eight inches of heavy wet snow had fallen the day before and was most likely the cause of the power outage. Snow laden tree branches were notorious for bringing down the power lines. We were to learn these were common occurrences every winter ― very different from the weather conditions during our previous winter spent in Glennallen.

One of our neighbor couples had driven to Seward for the day, but the other couple, the Hansons, had invited our family for Thanksgiving dinner. Not only our four, but also my parents, brother and two sisters, who were scheduled to arrive from Glennallen later in the day. The Hanson's daughter, her husband and two young sons, who lived in nearby Cooper Landing, would also be part of the gathering, making a total of fifteen.

This area did not yet have telephone service, but electricity had been available for a few years. Gary had already wired much of our three-room "cabin" since our arrival in August. But thankfully the wood cook stove was still the center of attraction in the kitchen and would come to the rescue for turkey cooking during this power outage, which continued for three days.

The Hansons' Coleman stove was kept busy all day making the trimmings for a wonderful Thanksgiving spread, most important of which was their family tradition of lefse (potato pancakes). 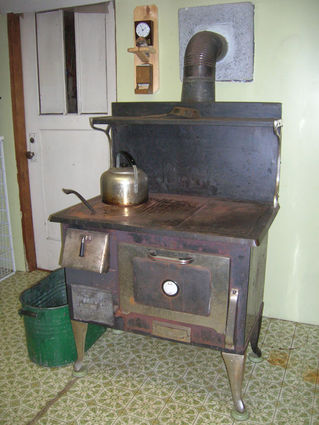 The cook stove, as seen in this photo taken in September on a quick overnight visit to the cabin.

At our house, by this time my family had arrived after a very hair raising journey around Knik Arm because of high winds and icy roads. Of course my mother came prepared to share one of our family traditions of making turkeys out of apples using toothpicks, raisins, black olives and pimento. That activity kept the little ones busy until it was time to "dress" for dinner.

At the appointed hour, the heavy roasting pan was taken out of the oven, wrapped in towels, placed in a box, and secured to the sled for the ride to the Hansons. Then we bundled up and all walked to the neighbors through a winter wonderland of white, with my brother carrying our hot green bean casserole.

That evening as we "toasted" one another with homemade cranberry juice, sitting around two kerosene lamp and candle lit tables, we had much to be thankful for: Safe travel for my family, a wood cook stove, good food, good health, and special new neighbors who would become friends for a life time.