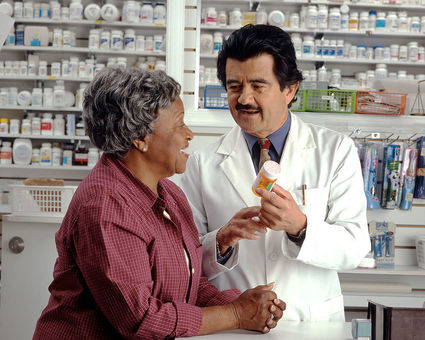 Many complicating factors of aging can increase risk of dehydrating, including taking medications.

Elders are among those most vulnerable to dehydration, and African American and Hispanic adults are more likely to become dehydrated than whites, researchers have found.

In a patient-care advisory last February, staff at the Mayo Clinic in Rochester, Minn., explained that dehydration occurs when the body loses more fluid than it takes in, causing a shortage of fluids needed for normal functions. While everyone is susceptible, dehydration is especially dangerous for older adults and young children.

"Older adults naturally have a lower volume of water in their bodies, and they may have conditions or take medications that increase the risk of dehydration," the Mayo staff said. Minor illnesses, such as infections affecting the lungs or bladder, can cause seniors to become dehydrated.

As people age, their fluid reserves decline, the ability to conserve water ebbs and feelings of thirst become less acute. These factors can be compounded by illnesses, such as diabetes and dementia, and by certain medications, Mayo advised.

Having kidney disease or uncontrolled or untreated diabetes also puts a senior at risk for dehydration. Taking medications that increase urination do too. A cold or sore throat makes older adults susceptible to dehydration because they may not feel like eating and drinking. Some seniors aren't mobile enough to get a glass of water.

The Mayo Clinic advises that severely dehydrated adults be treated immediately by personnel in an ambulance or in a hospital emergency room. The salts and fluids delivered intravenously by medical staffers are absorbed quickly, allowing a patient to recover.

These findings were based on data from National Health and Nutrition Examination Surveys (NHANES) for years 2009 to 2010 and then 2011 to 2012. The surveys are from the U.S. Centers for Disease Control and Prevention.

In its report, NCHS said 2004 recommendations from the federal Institute of Medicine set adequate daily levels for water intake from all foods and liquids at 3.7 liters, or 125 ounces for men, and 2.7 liters, or 91 ounces for women. Consuming less than those amounts increases the risk of dehydration and kidney stones and can reduce cognitive performance.

A 2017 study by Carolyn Brooks at Harvard and other researchers found that only 29.5 percent of American adults surveyed were inadequately hydrated.

Geriatrician John Morley, MD, of the Saint Louis University School of Medicine in Missouri, said recently that a decade of research he and other conducted during the early 200os determined that 10 percent of African Americans were dehydrated.

One reason, Morley said, was the common use of diuretics or water pills prescribed by doctors. "Dehydration makes people dizzy and vulnerable to falls," Morley said. "Falls can be fatal."

Morley also said that bottled water wasn't prevalent until late in the last century. "People were not in the habit of drinking water through the day," he said. "Today's bottled water is nice, but not everyone can afford it."

This column is an ongoing series from the Diverse Elders Coalition, looking at different segments of the senior population.