African American Trailblazers cut a trail for us all

From the Alcan to the state house these Alaskans made history 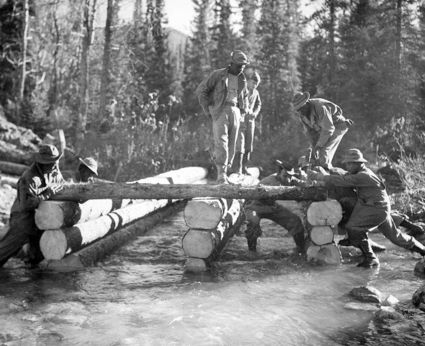 Members of the 95th Black Corps of Engineers.

Editor's note: Some of the times and dates for the Black History Month events changed after our print deadline and have been updated in this online version of the story, below.

This month, nine Alaskan African Americans and members of the Black Corps of Engineers will be saluted as Trailblazers by the Shiloh Community Development, Inc.'s Media Justice Project. This recognition is for achievements and contributions to the state over the last 75 years that are not often found in history books, but are an integral part of American history.

Alaska connects to the world

Alaska really became part of the United States with the building of the Alaska Canada Military Highway, simply known as the Alcan. In a large part, we have the African American men of the Black Corps of Engineers to thank.

After the Japanese bombing of Pearl Harbor in December 1941, America looked over its shoulder to realize that Japan was too close. With the invasion of Kiska and Attu and the bombing of Unalaska, it was clear a supply route to the Pacific Campaign was needed and the quickest way was through Alaska.

The U.S. military services were still segregated, but the 93rd, 95th, 97th and 388th units of the Black Corps of Engineers were sent north and comprised a third of the 10,000 men working on the road.

Despite prejudice, bugs, heat and severe cold, these soldiers pushed the 1,400-mile road through in record time, beginning in March 1942 to completion in October the same year.

Mahala Ashley Dickerson was born in Alabama in 1912, and as a schoolgirl became a life-long friend of civil rights leader Rosa Parks. Like Parks, she would devote her life to those underserved and underrepresented.

With a law degree from Howard University School of Law, she moved to Alaska and homesteaded, but also practiced law. She had many "firsts"- first black female attorney in Alabama, the second black woman admitted to the bar in Indiana in 1951, Alaska's first black attorney, the first black president of the National Association of Women Lawyers in1983, and she successfully prosecuted the first suit for equal pay for university women professors in the state's history. She was still practicing law in her 90s.

In an interview with the Anchorage Daily News, she said, "In my life, I didn't have but two things to do. Those were to stay black and to die. I'm just not afraid to fight somebody big ... Whenever there's somebody being mistreated, if they want me, I'll help them."

In 1949, Blanche Louise Preston McSmith and her husband William moved first to Kodiak and then to Anchorage. One of the organizers of the NAACP in Anchorage, she was its branch president and pushed for a civil rights bill in 1959 when Alaska became a state. The new legislature failed to act, but Gov. William Egan did appoint her to fill a vacancy for the 10th District in the House of Representatives, making her the first African American to serve there.

McSmith continued to push to end housing and employment discrimination, and succeeded when a fair housing ordinance was adopted by the Anchorage City Council in 1967. In 1972, she moved to Juneau and became the director of the Public Employment Program in the Office of the Governor until retirement.

Up through the ranks in many ways

Richard Watts moved to Alaska at the age of three in 1949. In the early 1950s, black people could only buy homes in certain neighborhoods, and his family moved to the east side of the city. Carr's grocery on Gambell, in the heart of the black community, had no people of color working there.

In 1963, at the age of 16, he joined the National Association for the Advancement of Colored People's boycott of the store. His parents had helped form the chapter after the torching of a black family's home in Rogers Park. Hired as a bagger, over the years he broke the glass ceiling from bagger to cashier to manager and on up to the executive level, retiring as supervisor of operations for Carr's Safeway after 53 years.

In that time, he said he believed he had "made a difference in mentoring black employees and individuals of all colors."

"I feel very appreciative and honored to be in the company of the other Trailblazers," he said by phone from his home. "Keep in mind, there were pioneers before me and many groundbreakers in the 1950s."

You can't have lived in Anchorage and not heard of Pastor Alonzo Patterson, who served the Shiloh Baptist Church for 47 years, retiring in 2017 at the age of 80.

Coming like so many to the state through the military, he was stationed in Fairbanks and then moved to Anchorage where he became pastor of the Shiloh Missionary Baptist Church. He expanded the work of the church through Shiloh Community Development, Inc., through community outreach that changed the lives of many through the youth mentoring program Young Lions of America, as well as ordaining over 55 individuals.

He was recognized for his good work in 2015, when the Alonzo B. Patterson Job Placement and Workforce Development Center was named in his honor. The year he retired, he was named Alaskan of the Week by U.S. Senator Dan Sullivan in the U.S. Senate.

Joshua J. Wright II served as a member of the Alaska House of Representatives from 1970 to 1972, the first African American man to do so. Born in South Carolina, he attended Howard University and studied zoology, chemistry and dentistry. He was the first black dentist to practice in Alaska. In 1956, he moved to Mt. Edgecombe to work for the Public Health Service Hospital, and in 1958, moved to Anchorage, where he died at the age of 88 in 2017.

Bettye Davis, who died just in December, fought hard throughout her years as an advocate for children. She worked in Alaska as a psychiatric nurse and social worker at the Alaska Psychiatric Institute in 1975, then as child care specialist in the Dept. of Family and Youth Services. From 1982 to 1989, she served in the elected position of executive director of the Anchorage School Board. In 1991, she served in the Alaska House of Representatives as the first African American woman to be elected to that body. Gov. Tony Knowles appointed her to the State Board of Education.

Davis became the first African American member of the Alaska State Senate in 2001, and served until 2013. She was again elected to the Anchorage School Board after the Senate.

In her time in the state legislature, she reached into her background as a nurse and in 2001 sponsored SB28, aimed at banning hospitals from forcing nurses to work, required a 10-hour rest period between work shifts, mandatory overtime pay, and capped the number of consecutive hours a nurse could work to fourteen. The House Finance Committee kept it from coming to a vote.

In 2009, she drafted the healthy schools legislation, intended to eliminate exposure to harmful chemicals in cleaning products used in schools, toys and other children's products, and required the use of the least toxic methods for controlling pests at public schools. It was not released in time for a vote and not reintroduced the next year.

"As a staff aide, I can't recall a time when she was too busy to offer insights on life, the many conversations we shared about the need to uplift women, our community and the children, and what it took to be a good servant of the persons who elected you to office," said her friend and former campaign manager Celeste Hodge Growden, now executive director with Shiloh Community Development, Inc. "She viewed the relationship between constituents and their elected representative as a sacred bond of trust that was never to be broken by mere matters of expediency."

Serving the law, the Lord and the people

The Rev. Dr. Edward Rhodes graduated from the FBI Academy in 1980 and earned a doctorate in Biblical Education and Theology.

He was the first African American to become an Alaska State Trooper and served from 1966 to 1982. Over the years, he was a sergeant, warrant officer and a lieutenant in the Alaska State Troopers in Juneau, Fairbanks, Anchorage and Palmer. Later, he served six years as Anchorage Police Chief.

If you don't have a car or can't afford one to get around Anchorage you have John S. Parks to thank for the city's transit system. Parks was a man who looked at a problem and pushed for a solution. A journeyman union carpenter, Parks lived in Fairview and saw inequities and set out to fix them. He got Fairview streets paved, pushed for the Eastchester Post Office, advocated for low-income housing, an expanded police force, neighborhood libraries, and a public mass transit system.

He is considered the father of Anchorage's public transportation and that's why the transit center in downtown Anchorage is named after him.

"Every Day is a Good Day to Workout," Feb. 9, Alaska Club West, 10:30 a.m. Join the club's Jacque Evans and Cameron Allen for the program of strength training, blood pressure screening and door prizes. 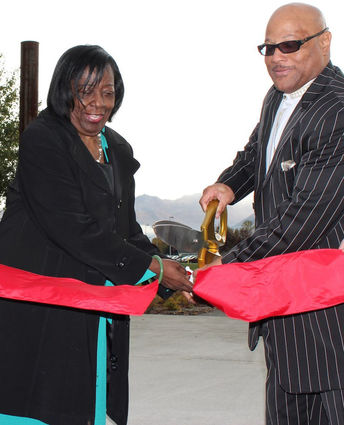 Hoops4Unity basketball tournament, Feb. 23, Fairview Recreation Center, 12:30 p.m. Cops and kids will play basketball. Register at the center. A mandatory training is required to participate. There will be T-shirts, trophies and pizza.

Story Time with Kids, Feb. 24, Barnes & Noble, 3 p.m. Children will read books authored by African Americans to adults and teens will read to younger children, and there will be arts and crafts.