This day of advocacy was decades in the making 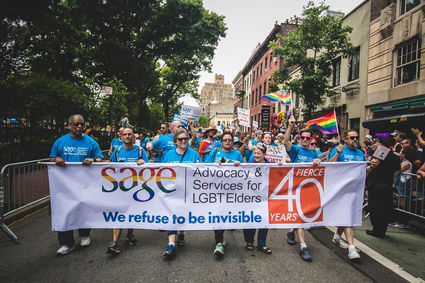 Demonstrators in the New York City LGBT Pride March in 2018.

Fifty years ago this June, LGBT elder pioneers started the fight for LGBT equality at the Stonewall Inn in New York City. In the early hours of June 28, 1969, LGBT patrons at the Stonewall Inn took a stand against police harassment and violence, and a riot broke out. Police reinforcements arrived and beat the crowd away, but the next night, the crowd returned even larger than the night before. In the wake of the riots, discussions about civil rights were held among New York's LGBT communities and around the country, inspiring millions to advocate for LGBT rights and forming LGBT rights organizations in several major U.S. cities.

As the nation nears the 50th anniversary of this watershed moment for the LGBT movement, SAGE and LGBT elders from across the country will gather in D.C. for SAGE's first-ever National Day of Advocacy on March 13, 2019.

The Day of Advocacy will be held in conjunction with the annual SAGENet meeting, where SAGE affiliates gather to share ideas, participate in training sessions, and sharpen their advocacy skills. SAGENet affiliate leaders, SAGE constituents, and allies will speak directly with their senators and representatives about their needs as LGBT older people - just as newly elected officials are taking office. This is a chance for those constituents to say, for example, "I live in Alaska. I am an LGBT older person in your district, and here's what's important to me."

There's a lot to discuss, including the importance of protecting Medicare, Medicaid and Social Security. The group will also prioritize talking to legislators about the Older Americans Act (OAA), the country's leading vehicle for delivering services and supports to older people nationwide. The OAA makes many services and supports for older adults available at low or no cost. Necessary services like home delivered meals, transportation and benefits counseling all help older adults live in their homes and communities and age with dignity. It is an invaluable law that helps millions of people each year.

The relationships that are forged during this Day of Advocacy will work to help SAGE and its allies come together to pass the Equality Act, a national policy that aims to protect LGBT people from discrimination. The Equality Act would amend the Civil Rights Act of 1964 and the Fair Housing Act to ban discrimination against LGBT people in employment, housing, public accommodations, jury service, education, federal programs and credit. The Act would also push back against religious liberty claims used to discriminate against LGBT people.

As we commemorate the 50th anniversary of Stonewall and the founding of the modern-day LGBT rights movement, our elders will continue their advocacy, sending a loud and clear message to Congress that we will continue to fight relentlessly until all LGBT elders have equal protection under the law.

Sign up for SAGE's National Day of Advocacy at https://www.sageusa.org/national-day-of-advocacy/

If you can't come to Washington, D.C. this month, you can follow SAGE on Facebook (www.facebook.com/sageusa) to get updates from the event and learn how to bring a Day of Advocacy to your state and local legislators!

Aspen Christian is a marketing and communications coordinator for SAGE USA, which is headquartered in New York City, with affiliates in 20 states and the District of Columbia, including SAGE Alaska in Anchorage.

This story is part of an ongoing series by the Diverse Elders Coalition, looking at different segments of the senior population.