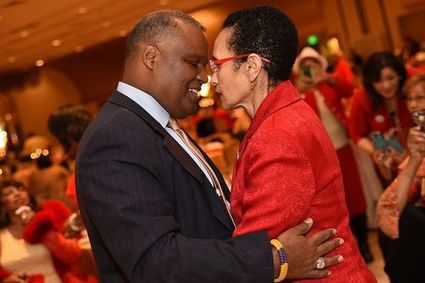 A decade ago, Rushern Baker III started seeing signs that something was wrong with his wife when she was still in her late 40s. Christa Beverly was forgetting things and losing things. It took some doing, but he convinced her to see a doctor. She was tested, and at age 49 was diagnosed with early-onset Alzheimer's. Within a few years of the diagnosis, Christa had lost most of her functions. Today, at age 58, she is unable to talk, walk or eat on her own, but she remains at home. Baker, 60, has remained his wife's primary caregiver through it all.

Alzheimer's twice as likely for blacks

An estimated 5.7 million people live with Alzheimer's in the United States, including 1 in 10 over 65, according to the Alzheimer's Association.

What may surprise many is that African Americans like Christa are far more likely to be afflicted with Alzheimer's or other dementia types than whites. Researchers say that may be partly related to some of the health issues that are more prevalent in the African American community.

"Everyone should be concerned, but African Americans are twice as likely to have Alzheimer's, less likely to receive a diagnosis and more likely to be diagnosed in later stages," says Joanne Pike, vice president of programs for the Alzheimer's Association in Chicago.

Daniel Bateman, assistant professor of psychiatry at the Indiana University School of Medicine and a scientist at the university's Center for Aging Research, says a number of studies show a higher rate of Alzheimer's in African Americans.

"There has been some hypothesis as to why," he says. "There are higher rates of diabetes, hypertension, high cholesterol, heart disease and diabetes in African Americans compared to whites. All of those are risk factors for Alzheimer's and dementia."

One of the problems with determining the reason for the higher rate of Alzheimer's cases is that African Americans are not well represented in clinical trials, research studies and screenings that produce earlier diagnoses. "We need more information," says Pike.

Also, there is a stigma related to talking about diseases like dementia. Baker says mental illness was not something that was readily talked about in the African American community, even in churches.

Pike blames a lack of public awareness or understanding. "Stigma prevents people from getting treatment or diagnosis."

"In our community you didn't talk about it," Baker says. "By the time it is clear something is wrong, you are two to three years in. The things you could have done to prepare family financially and emotionally don't happen until you are in the last stages."

The emotional and financial impacts of dementia are huge, he says. And people need to be willing to talk to family and friends about it and seek support from organizations like the Alzheimer's Association.

Help from organizations and church

He found help through the organizations like the Alzheimer's Association, and his local church, where he now takes his wife every Sunday.

Pike says the Alzheimer's Association is seeking volunteers willing to share information on support groups, such as Purple Sundays, which offers education and resources to the African American faith-based community. Those programs allow people who notice symptoms in themselves or family to talk to a faith leader before they visit a doctor.

"The thing I would say, especially to the African American and Latino community: 'Don't be afraid to speak out,'" says Baker. "If you think there is something wrong with a family member, they are forgetting things, it is important that you seek medical attention. Once you get the diagnosis, it is not the end of the world. There are ways to make your life and your loved one's life as comfortable and rewarding as possible."

Rodney A. Brooks wrote this article for USA Today with support from the Gerontological Society of America, Journalists Network on Generations and AARP.