Tips for photography while traveling 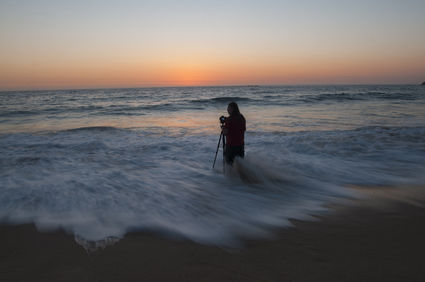 Alaska photographer Colin Tyler Bogucki positions his camera in the surf at Coogee Beach in Sydney, Australia. Bogucki, who lives at the Eagle River Nature Center and photographs professionally, says he got up early to avoid crowds for this photo shoot. "It was my last morning in Australia so I wanted to catch one last sunrise and enjoy the morning light. It was a perfect way to end my first trip there. Adding the human element (me) made it more interesting than just shooting the scene. My goal was to capture my mood in the scene, looking out at the Tasman Sea and reflecting on my Aussie adventure."

I was reading a travel article recently and noticed a photograph the writer took of a local in the country he was covering. They were not smiling. In fact, they were scowling.

It reminded me of the time I watched a visitor to Utqiagvik take a photo of three Inupiat women elders in the MarkAir terminal. They were dressed in the latest fashion of exotic Hawaiian prints for the covers of their traditional parkas and rhinestone pins on their wolverine ruffs that seemed to be a friendly contest among them as to who had the most brilliant print and pin with the most unusual form.

As the traveler took their picture I saw them scowl and I took a mental note to never take such a photo without asking permission.

It became a regular announcement when I was in a public situation as a reporter and I always said up front before the meeting began, "If you don't want your photo taken just wave me away or use a hand gesture. I won't be offended."

It worked well and was appreciated.

You've heard of the ugly American that travels the world thinking it's just America's backyard and is ignorant of local customs or doesn't feel the need to be polite to people of other cultures. This kind of rudeness will yield you photographs of disgruntled locals. If you ask permission they may give you an inside tip of special places to go or where to taste local delicacies, but for sure they'll be responsive to you.

I go back and forth on this, but surely if you're in a country where people are begging on the street and the annual income falls fathoms below the U.S. poverty line, yes do this.

I was with my Mom once in Cozumel, Mexico, in 1988 and she was a champion haggler, but when she tried to bargain with a group of Guatemalan refugees I whispered that they were immigrants and bargaining was not recommended.

It would be different if you were in a booth in a market in Casablanca or Cairo – that's part of the buying experience in those countries.

It is best to know the political and economic circumstances in the country you're visiting and proceed accordingly. You could make a big difference in someone's life.

In return you'll get a smile to remember and capture for your memories.

How to frame a photo

The rule of thirds was first recorded by John Thomas Smith in 1797. In his book "Remarks on Rural Scenery," Smith quotes a 1783 work by one of the most famous English painters, Sir Joshua Reynolds, that discusses the balance of dark and light in a painting. Smith expanded the idea and named it the "Rule of Thirds."

"And to give the utmost force and solidity to your work, some part of the picture should be as light, and some as dark as possible: These two extremes are then to be harmonized and reconciled to each other," according to Reynolds.

It is easiest to frame a photo with elements that are either natural, like trees, or architectural, like a window.

Using this principle, the eye is drawn to the most important element of the scene. Experiment before you go and be a critical editor of your photographs.

Nowadays, with digital cameras and smart phones in just about everybody's hand everyone thinks they're a photographer, but there's more to it than point and shoot.

Cameras to take along

I use a Nikon Coolpix

AW (all weather) 100 digital camera and have gotten some great underwater shots and love that I can shoot in any weather and not worry about water damage.

The Nikon W300 Waterproof Underwater Digital Camera for $386 is a good deal and has more bells and whistles than my Nikon AW100. A waterproof, freeze-proof, shockproof and dustproof adventure camera, it comes with extra capabilities, among them time-lapse videos, a 5x optical zoom NIKKOR lens with telephoto power, image stabilization, Wi-Fi, Bluetooth, GPS, eCompass, altimeter, depth gauge and the capacity to shoot images underwater up to a depth of 100 feet for 60 minutes.

The Olympus TG-5 Waterproof Camera with a three-inch LCD, for $399, offers a 12MP high-speed image sensor for improved low light performance and noise reduction. It has a field sensor system with GPS, a manometer to gauge underwater pressure, a compass and temperature sensors. It's waterproof to 50 feet and has an anti-fog lens. If you've ever shot underwater or in wet conditions, you know how great this feature is.

A heads up for travelers to Europe

The European Travel Information and Authorization System is an electronic travel visa, and from 2021 on, visitors traveling in the Schnegen Area will need an ETIAS travel authorization before they travel. 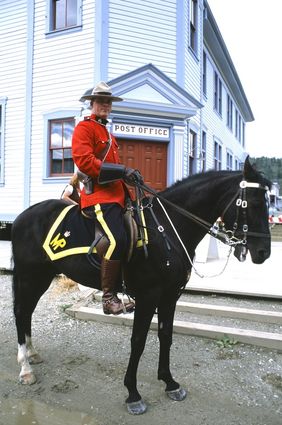 When you're a tourist, asking permission before taking someone's picture is not only courteous, it often yields better photos. This Canadian Royal Mounted Police officer was patrolling in Dawson City, Yukon Territory, when the author asked to take his photo. He allowed her to do so and then galloped off.

Schengen countries are those European countries that have signed the Schengen Agreement, allowing countries to operate with no internal border controls to give travelers free movement between the participating countries. Of the 26 Schengen member states, the majority of them are countries in the EU, however two EU countries, the United Kingdom and Ireland, did not sign on to the agreement.

In light of the recent increased security risk to both European Union citizens and to those traveling to the Schengen Area, the EU is implementing ETIAS to ensure the safety of all those within its borders.

The visa for Europe, ETIAS, will be available online and you would need a valid passport, an email address and a debit or credit card to pay for the application fee. There are also a set of security and health questions.

Applications are checked across security databases that include SIS, VIS, EUROPOL DATA and Interpol.

Check this site for updates on the process: https://www.etiasvisa.com/etias-form-application.