Student load debt is a crisis for seniors

If you think America's college loan crisis – with more than $1.5 trillion worth of debt – is only a young person's problem, think again. The federal government is now garnishing the fixed-income Social Security benefits of seniors in its crackdown to get people to repay student loans.

More than three million people over 60 are still paying off college loans. Many of these seniors took out loans to help their children, grandchildren or spouse pay off tuition and are still paying them off. Others took out student loans for themselves in the wake of the last recession, as they went back to school to boost their own employment prospects.

The numbers are simply staggering.

Americans age 60 and older owe more than $86 billion in unpaid college loans, according to the government's Consumer Financial Protection Bureau (CFPB) and 40 percent of those over 65 are in default. Studies show that seniors' default rates are almost double that of younger borrowers.

But the worst part is that many seniors are now having their Social Security benefits garnished to pay off these student debts. Student debt experts say that these seniors are the fastest growing segment of student loan borrowers.

The federal government is not cutting seniors any kind of break either and are driving tens of thousands of older Americans into poverty. While older borrowers are just a tiny sliver of the more than $1.5 trillion in total outstanding student loan debt, they are much more likely to be behind on payments.

Here are some of the staggering statistics.

Total student loan debt rose 161% for people age 60 and older from 2010 to 2017 - the biggest increase for any age group, according to the latest data available from TransUnion. On average, student loan borrowers in their 60s owed $33,800 in 2017, up 44% from 2010, according to data compiled for the Wall Street Journal by credit-reporting firm TransUnion.

The federal government, which is the largest student loan lender in the country, garnished the Social Security benefits, tax refunds or other federal payments of more than 40,000 people age 65 and older in fiscal year 2015, according to a recent Government Accountability Office (GAO) report. Almost 114,000 borrowers age 50 (including that 40,000) and older had Social Security benefits seized because they defaulted on student or parent loan debt. Private student loans are not subject to Social Security garnishment. The average garnishment for those borrowers was more than $140 per month.

American consumers age 60 and older owed around $615 billion in credit cards, auto loans, personal loans and student loans as of 2017, according to TransUnion data. As reported by the Wall Street Journal, student debt is one of the biggest contributors to the overall increasing debt burden held by seniors. That is up 84 percent since 2010, and an analysis by Forbes of Federal Reserve data found that seniors' student debt has shot up 71.5 percent over the past five years – the biggest of any age group. This type of borrowing and debt has upended the traditional arc of adult life for many Americans. For many, the debt has become a nightmare, with delinquencies rising and debt collectors hounding seniors for payments they can't afford.

In its report, the CFPB pointed to a University of Michigan study that found in 2014 that 39 percent of consumers age 60 and older with student loan debt had skipped medicines, doctor visits and dental care. And of course, many seniors are least able to handle debt because they are often living on fixed incomes. According to Social Security Administration numbers, 21 percent of married people and 43 percent of unmarried people count on Social Security for 90 percent or more of their income.

The average monthly benefit for 41.2 million retired people is $1,360.

How did this happen?

Many seniors have been forced to work longer, holding onto positions younger adults might otherwise receive. Many have had to rely on credit cards and personal loans to pay for basic expenses. Not surprisingly, people age 65 and older are also a growing share of U.S. bankruptcy filings, according to the Consumer Bankruptcy Project. But unlike most consumer loans, student debt is rarely dischargeable in bankruptcy.

Most student repayment plans usually last only 10 years. And even extended repayment plans are usually 20 to 30 years. For the most part, if the senior is the actual student, it's usually because they went back to school to increase their job prospects or learn new skills. And that often meant taking out loans. But the numbers show that a large, if undefined, percentage of seniors are taking out loans for their children, spouses and grandchildren.

The 2008 recession also was a big factor for many seniors. The rules about student loans changed after that, as banks and other private student lenders began tightening underwriting standards for their loans, requiring more parents to sign on to student loans along with the student borrower. Cosigning made the parents equally responsible for paying back the loan, prompting lower credit scores and parent's abilities to borrow if they or their children missed a payment.

In addition, private lenders like SLM Corp., better known as Sallie Mae, have rolled out student loans that are just for parents who want to pay for their child's college education at lower interest rates and allowing the parent to take on the debt themselves. Another major change that has changed since the recession is that now the federal government caps the dollar amount of loans that undergraduate students can borrow, but no caps exist for the aggregate amount that parents can take on. So many parents are extending themselves to help cover the gap between tuition costs and the amount of aid and loans their children receive.

So far, there are no workable solutions. Lawmakers on Capitol Hill and at state legislatures around

the country have struggled to address these problems for years, if they address it at all.

Sens. Ron Wyden, D-Ore., and Sherrod Brown, D-Ohio, have introduced legislation that would take away the federal government's power to garnish Social Security benefits to collect debts like student loans. Unfortunately, the effort is more of an educational exercise to let people know how severe the problem is for seniors. The legislation is not expected to go anywhere in the politically-divided U.S. Senate.

In 2013, the Senate Special Committee on Aging held a hearing on this problem. Presidential contender Sen. Elizabeth Warren, D-Mass., who was on the committee at that time, introduced legislation that would allow people who borrowed money for education before then to refinance at current, lower interest rates (which usually meant about a four percentage point difference).

But like Wyden's bill, Warren's bill, which would have helped 25 million people refinance their student loans, never went anywhere, stalled by Republican senators like Lamar Alexander, R-Tenn., who said college students didn't need a taxpayer subsidy to help pay off student loans. "They need a good job," he argued at the time. Warren suggested paying for this by taxing people making over $1 million.

AARP has been using its clout to help at the state level, pushing for more regulations to police abusive loan collection practices. In addition to AARP's backing, the National Committee to Preserve Social Security & Medicare, another senior advocacy group, is also supporting student loan reforms.

In New York and Maine, AARP worked to pass new laws aimed at cracking down on predatory practices by companies that are collecting student loan payments. But these efforts have met with strong opposition from industry groups and more recently, the Trump administration. Meanwhile, on a related front, the Trump administration continues to push for the rollback of Obama-era borrower protections and rules on for-profit schools that conservatives believe went too far.

This student debt issue is certain to be raised over the course of the 2020 presidential campaign, as politicians are keenly aware of the economic anxieties of parents and recent college graduates. Broadening the issue beyond seniors to all student debt, Democratic presidential candidates have called for billions of dollars in new federal investment in public colleges and universities so that schools could eliminate tuition for some students.

Democrats are not the only ones trying to address these problems. Some conservatives have called for a greater federal focus on less expensive alternatives to four-year college degrees, suggesting that the availability of federal student aid is driving up college costs. Lawmakers from both parties have floated ideas that would put some colleges and universities on the hook for how well their graduates are able to repay their federal student loans.

There are other potential solutions. Some federal payment plans can be used to stop the garnishment. One such plan, for example, allows people whose income is below 150 percent of the federal poverty guideline to technically be considered on time with the payments with the loan while making no payments toward it. But these plans are difficult to find and qualify for.

If your benefits are seized to repay a federal student loan, you cannot appeal to the Social Security Administration; rather, you must appeal to the Department of Education.

AARP also recommends that if you are facing federal student loan default or offset of your Social Security disability or retirement benefits, first contact your loan servicer before you go into default or try to modify payment arrangements. Others can try to "rehabilitate" their loans by making nine on-time payments over 10 months, based on your income, to a debt collector, according to the CFPB. That will get the loan removed from default status. Still others might try and seek a financial hardship exemption from the Department of Education.

Also contributing to this column were CBS News, The Wall Street Journal, Politico, Forbes and the New York Times. 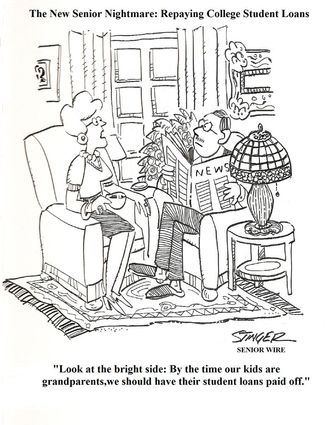