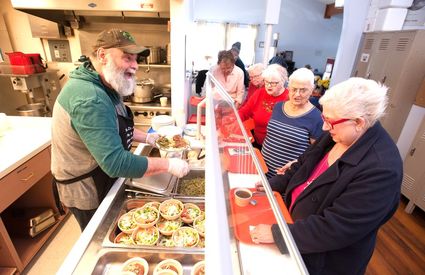 Employee Jim Bowles serves up a meal to Pamela Peterson at Mid-Valley Senior Center in Houston.

After four years of closure, Mid-Valley Senior Center in Houston is under new ownership and providing meals on a regular schedule, although services are severely curtailed for now due to the coronavirus. In January, Wasilla Area Seniors, Inc. (WASI) finalized a deal to take ownership of the center, along with one of its senior apartment buildings. WASI, which owns and operates the Wasilla Senior Center and several Wasilla senior housing complexes, had already been catering meals on a contractor basis at the Houston center for about a year in an effort to serve seniors in the area.

The meals are prepared in the Wasilla Senior Center kitchen, driven to the Houston center and served for lunch.

"Wasilla Seniors started catering meals out there in April (2019)," WASI CEO Chuck Foster said. During that time, Mid-Valley Seniors, Inc., was wrapping up its affairs to dissolve the organization, but wanted to be sure local seniors were served, Foster said.

Meals are served Monday through Friday at noon. The center opens at 11:30 and wraps up at 1 p.m. In March, Foster said, "There are about 90, probably 100 people now, that we have seen come through. But not everyone comes every day. Probably about 20 people show up on a given day." He noted the turnout is larger for menu favorites: "Everybody is going to come for pot roast. Today, we had a seafood platter and a whole lot of people show up for that."

During the coronavirus self-isolation mandate, meals are being provided on a carry-out basis only at the Mid-Valley center. Menus are posted on the center's Facebook page, http://www.facebook.com/midvalleyseniorcenter. 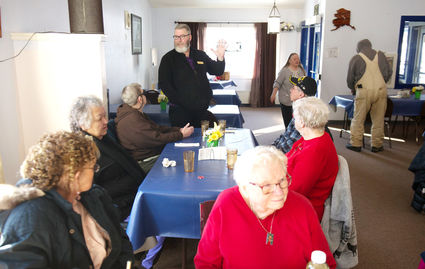 Program Manager Toby Hagelberger, standing, speaks to some of the diners at Mid-Valley Senior Center.

Ownership of the Houston center was officially transferred as a donation to WASI in January, along with the 8-unit Blueberry Pointe Senior Housing, also in Houston. Although the senior center went through a time of closure, Blueberry Pointe has remained stable, Foster said. "Those units are highly sought after. It's very rare for anyone to move into those buildings and choose to move out."

Future goals include bringing back classes, recreational activities, health fairs, and other events and services usually found at a senior center, Foster said. "Our intention is for Mid-Valley to continue its identity as serving its area's seniors," he said, noting that there are a lot of seniors living in the area. "But of course this all presupposes that that's what the senior themselves want." He said there are plans to conduct some surveys this spring to learn more about the local wants and needs. For more information, call WASI at 907-376-3104.