These movies, books take you traveling

Alternatives to tourism in the time of disease 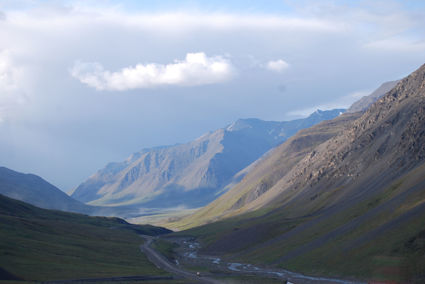 Haul Road: Imagine yourself on the Dalton Highway dwarfed by the Brooks Range as you drive through Atigun Pass with an eye out for musk oxen.

Well now, here we are. The Canadian Border is still closed and there's the difficulty of traveling to other locations where officials continue to uphold social distancing and stay-at-home advisories.

But Alaska has opened up and maybe it's time to hit the road or maybe, if you have underlying health concerns, to sit in a nice comfy chair and watch a good travel movie or read though travel guides to prepare you to go when the world becomes more welcoming.

Movies with scenery and emotional punch

When I get too cynical about life, which is normal for a journalist, I turn to the film adaptation of Anne Tyler's "The Accidental Tourist." I always cry buckets and then am buoyed by the simple redemption of love.

The marriage of travel guide writer Macon, played by William Hurt, his wife Sarah, played by Kathleen Turner, dissolves in despair after the accidental murder of their young son. The pair's dog begins to exhibit hostile manners and is taken to a local dog trainer. In an Oscar-winning performance, Geena Davis plays Muriel, just a working girl and not of the Macon's social class.

The empathy and compassion that Muriel shows for him lifts him back into life.

Based on John Steinbeck's "Travels with Charley," another heart-warming book by John Steinbeck, one of the best writers in the country, this tells of his wanderings across America with his standard poodle Charley, with whom he has mental conversations as a device for exploring his thoughts.

Full of his keen eye for regular Americans, this is a book revealing the country as it was in the early 1960s.

In "Notes from a Small Island," author Bill Bryson, before his return to the U.S. after a 20-year residence in England, took a farewell tour of Great Britain.

Towns and villages and the people who inhabit them come to life in his witty prose. Traveling only on public transportation and hiking whenever possible, Bryson shares what he loved about the English and their simple ways of life.

Meanwhile, the writer Paul Theroux brings Alaskans' favorite winter getaway, Hawaii, to life in "Hotel Honolulu." The fictional character is a writer looking for a place to land and does so as the manager of a rundown hotel with its odd collection of characters. Each guest has come in search of something and everyone has a story.

Theroux also traveled by train across China and recountsin "Riding the Iron Rooster" his four-month journey by train in 1973 across China, from London sthrough Europe, the Middle East, the Indian subcontinent and Southeast Asia, and his return by way of the Trans-Siberian Railway. Train enthusiasts will approve.

I have to say my all-time favorite Alaska guide is "Alaska Best Places," now out of print but available in used bookstores and Amazon for around $5, but for some reason the latest, which is 2007, has copies available for $129!

The first guide book written by Alaskans, the chapters are still filled with useful information and insights,

I wrote the Skagway and Yukon sections and it was great fun sharing what I'd experienced in my travels. Like this about Skagway: "For all the tours to take, No. 1 is riding the train, and let no tour hawker dupe you into believing a trip by road up and down the White Pass is the same. The YP&YR trains pass through some of the most astounding scenery and ecosystems. We never tire of the trip.

Sure, some visitors declare it 'just trees and rocks, rocks and trees.' They are soulless." 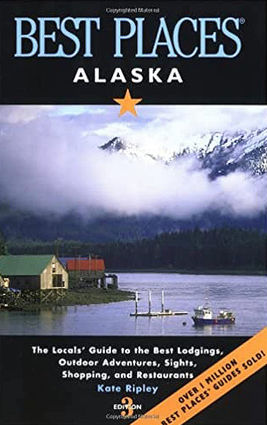 Or this about the Dawson City River Hostel & Cabin across the river from Dawson City in the Yukon: "Welcome to Dieterland. This is Dieter Reinmuth's own hostel that he built by hand. Look around at the unique use of old bicycle parts and recycled junk. A fertile mind put this all together. As in any sovereignty, there are laws. Don't worry, you won't have to memorize them - they're posted everywhere."

We stayed at Dieter's several years ago and have a hilarious video of his cussing out in a thick German accent some motorcyclists who roared into camp early in the middle of the night and blasted "Friends in Low Places" for a departed buddy.

Other useful guides include the Lonely Planet series and Frommer's, however I've always thought Fodor's is a little fuddy-duddy and kind of dated in tone.

All guides now have not only print books, but online sites and smart phone apps for easy reference while you're on the go.

Travel will be a different animal after this pandemic and we have no idea of how tourism will be impacted.

In the meantime, stay safe and wash your hands.