Berries bring out the good in us 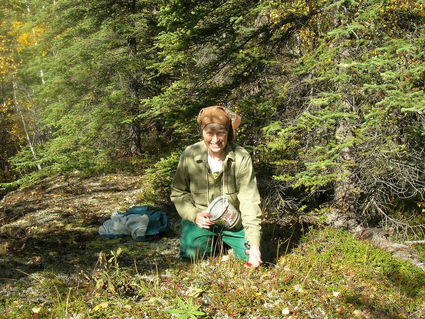 Maraley McMichael picking cranberries in the Slana area in September 2010.

One morning in August 2012 I answered the ringing phone and heard "Hi, this is Kim. Gary and I have been picking blueberries in Hatcher Pass and we have more than we need. Could we bring you some?"

Several thoughts jumbled through my mind including, "no, we can't accept that generous of an offer two years in a row, and yes, that would be so wonderful." Because of my health issues and our move back to Palmer, I picked not one berry during the fall of 2011. Now feeling much better a year later, I had considered picking berries and discussed it with my husband, whose name is also Gary. But we hadn't felt up to making any definite plans.

The August before when Kim and her husband (a good friend of our son's since high school), dropped in unexpectedly with two large bags of frozen wild blueberries, I was overjoyed. Now, I told Kim that I'd recently eaten the last of those berries as flavoring for a bowl of oatmeal. She waited on the other end of the phone for my response.

I have been picking berries for as long as I can remember. Growing up in Glennallen, this activity was just as much a part of life as going to school every fall. The woods out back were full of cranberries and rosehips, and we picked blueberries while out on hunting trips and other excursions.

When older, I married a berry picker. At the time, I didn't realize how fortunate that was. He came with cookbooks and several jars of homemade "ketchup" made out of rose hips, which I thought tasted horrible but didn't tell him until years later.

When we were newly married and living near Fairbanks, I became very serious about picking berries and making jams and jellies. Cases of it. We gave it to family and friends for Christmas. Out on the Chena Hot Springs road, we lived right next to the best blueberry patch I'd ever seen. That's when I found the blueberry muffin recipe which is still our favorite today. Our standard "company" meal was black bear stew, coleslaw and blueberry muffins. The cranberries were great, too, so I experimented by making my first batch of cranberry juice.

Picking berries continued during our two years living out in California in the mid-1970s. Once while seven months pregnant, we went to a U-pick strawberry farm. Gary had to drag me out of the field. One of his sisters took us up into the hills for blackberries, which were just like our raspberries, only bigger and black. We also picked tiny huckleberries with his mom in the coastal "mountains" on the property where he grew up.

Back in Alaska, we found a different variety of blueberries during our years on the Kenai Peninsula. One year when the cranberries were exceptional, I was tempted to pick for Alaska Wild Berry Products, but with three young ones (two in diapers), finding time to berry pick was a challenge.

Later, after we moved to Palmer in the 1980s, there were enough currants on our property to sell the extras to Alaska Wilderness Gourmet - about $70 worth every fall. This was before the weekly farm markets developed, which have become so popular. One fall, during a visit with Dad and Mom in Glennallen, I picked four gallons of cranberries. Mixed with 7-Up, that juice was served at all the special occasions for the next several years.

During those years, I also looked forward to blueberry picking excursions in Hatcher Pass and up the Glenn Highway. After Dad and Mom moved to Homer, we tried to plan an annual trip to visit them in mid-August to pick raspberries from Dad's raspberry patch, which produced gallons every year.

Once our kids graduated from high school and were out on their own, we moved yet again. This time to the little interior town of Slana, where nearby blueberry picking was fantastic. For 11 years both Gary and I picked every fall. He with his metal fingered "picker" while I used both hands. Although the results were about equal, mine were much easier to clean. During the six years we ran a bed and breakfast in our Slana home, blueberry pancakes were a highlight of the breakfast menu.

When we found some guests substituting my spiced blueberry jam for syrup on their pancakes, a new business was born.

I spent hours, days and weeks creating a variety of jams and jellies which were purchased and taken home with bed and breakfast guests from all over the world. During those years, we always had readymade gifts for any occasion, including weddings. When both our kids married in 2005, wedding guests in Louisiana and Colorado all received a memento of a little 1 oz jar of spiced blueberry jam made in Alaska. 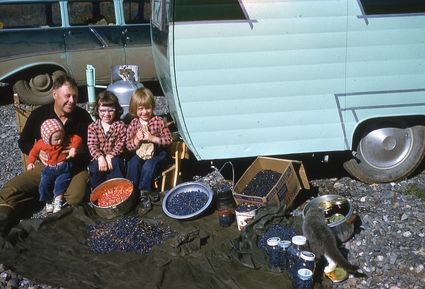 Four-year-old Maraley Clayton McMichael (center with glasses) with her two sisters and father show delight with their berry bounty. The Clayton family was camping, fishing, and berry picking on the Nabesna Road in mid-August 1960.

For so many years, I couldn't imagine life without berry picking every fall and jam-making any time of the year. But, things change as life happens. I really don't remember how I first responded to Kim's offer of blueberries over the phone. Probably with some combination of both hesitation and acceptance. But when she made the comment, "We actually picked some extra with you and Gary in mind," I quit beating around the bush and answered with a definite yes. "We would absolutely love some blueberries."

Over the years, I too have given away handpicked berries on several occasions for various reasons. By 2013, I was back to picking my own berries and even sharing some with others. But, I learned how to humbly receive, because of the heartwarming gifts from Kim and Gary those two Augusts.