Broadcasting, podcasting and breaking down stereotypes 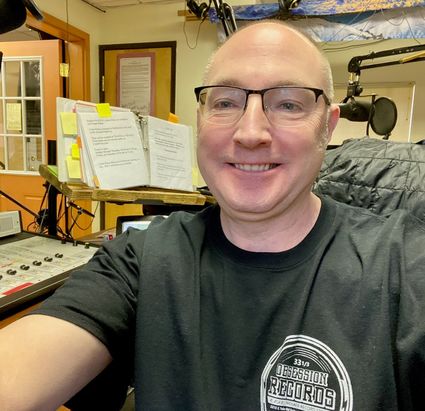 Jon Scudder broadcasts his weekly "Glacier Rock Show" music program from the studio at KEUL 88.9 FM station in Girdwood, Sunday mornings from 11 a.m. to 1 p.m. The program has been picked up by many other radio stations around the country, Jon says. His interest in computers and involvement with the Alaskan Apple Users Group prompted him to begin his own weekly podcast, "Mac Minutes".

Jon Scudder is a Michigan native and has lived in Alaska since 1997. He is a retired 20-year Air Force enlisted member and presently works in civil service at 673d Civil Engineer Squadron, Joint Base Elmendorf-Richardson. He is married to Sharon, has four adult children and seven grandchildren, the majority of whom reside in Anchorage and Girdwood. His interests in technology, broadcasting and podcasting belie the typical stereotypes of older people, and we sent him a few questions for his thoughts on his this.

Senior Voice: Please give us your background in the realm of computers, technology and educating people (and in general)?

Jon: I've been interested in technology my whole life, from a child assembling a crystal AM radio, to the present, with engineering and hosting a weekly, nationally-broadcasted music show at Glacier City Radio, KEUL 88.9 FM in Girdwood. Academically, I have a Bachelor of Science degree in Broadcasting Technology from Ferris State University, in Big Rapids, Mich. I have been involved with computers since they were developed. Apple computers have always been my favorite. I've been a member and now president of the Alaskan Apple Users Group in Anchorage. I have used my skills to teach fellow members and we learn from each other. The group is primarily seniors and we have members from all skill levels. We meet monthly and have other special events. Podcasting has been an interest for a while now, which has now evolved to hosting the Mac Minutes Podcast for nearly three years.

I am 59 and see myself as a senior citizen, probably more physically, than mentally. I use technology to stimulate my mental acuity. I am always learning and enjoying the challenges.

SV: What do you feel is the biggest challenge to older technology users? And how would you reassure them on dealing with the challenge?

Jon: I find people who aren't familiar with technology to be intimidated with the devices, be it a computer or a cell phone. Technology truly can make your life better, especially in the health field.

I take my health vitals with devices that keep a record for myself and my physician. I often see people who have the misconception they believe they will break the device. While learning, you might lose some data, but rarely have I seen anyone do permanent damage.

Don't get frustrated! Other people have experienced the same difficulty and often it's documented how to solve it.

SV: What do you say to the stereotype that seniors are inept with technology? Or is that even a stereotype?

Jon: Most definitely, a stereotype. My radio station general manager, who is in his 70s, is one of the smartest technicians I have ever known. Our Alaskan Apple Users Group has seniors who are avid information technology users from private business to NASA. Sure, seniors span from novice to advanced skills. One thing is for certain, we all started from the beginning.

SV: Do Alaskans face any extra challenges (or benefits) with technology, connectivity, etc.?

Jon: I think the biggest challenge we have in Alaska is connectivity, especially in remote areas, and the affordability. We are making steadfast advances in Alaska with satellite connectivity throughout Alaska.

SV: What's the number one question you get from older people regarding technology?

Jon: What kind of computer or cell phone they should buy. It's a question that requires learning about the person's purpose for the device. I can generally point them in the right direction after talking with them. It's not a 'one-shoe-fits-all' decision. Also, there is some subjectivity, much like the make and model of car or truck you drive.

SV: Tell us how you came into podcasting. When did you start your own podcast, what prompted you to start it, and how has the experience been? 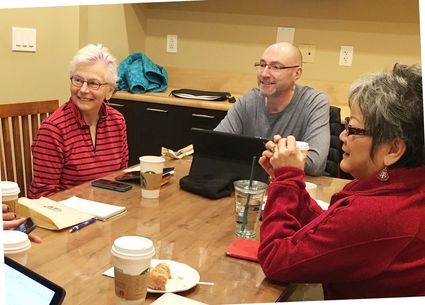 Alaskan Apple User Group President Jon Scudder, center, chairs the 'Computers and Caffeine' event with Liana Hanson, right, Susan Klein, and other members at Starbucks in Anchorage. Computers and Caffeine is a monthly event where members bring their computer problems and tech news for discussion. The group meets virtually during the COVID-19 pandemic and will return to meeting at local coffee shops when possible.

Jon: Podcasting started for me as a listener and evolved to production. Virtually there are audio and video programs for every interest. I started listening to primarily tech-oriented podcasts but have since expanded my listening from other hobbies and politics. After listening for several years, I became interested in producing a show. A couple years went by without anyone dedicated to host a show. The technology behind podcasting has been my true love, not hosting it. Finally, I decided I would stop the search and sought tutoring from our Anchorage Apple Store. Unlike the Lower 48, there wasn't an abundance of podcasters to share their skill. The Apple creative staff provided me the programming fundamentals and off I went. I researched topics which led to capitalizing on my knowledge of Apple devices, software and accessories, and Mac Minutes was started. Mac Minutes was chosen because of the frustration of listening to meaningless meandering from the topic by other show hosts. Furthermore, I wanted to contribute to teaching and learning more about technology. I strive in each 10-minute podcast to give an equal amount of content as other much longer shows. I now have regular listeners throughout the country and in more than 60 countries.

SV: What has been by biggest challenge with podcasting?

Jon: For many podcasters, the discipline of keeping a regular show schedule is often the hardest. I think for me, sponsorship has been the biggest challenge. The production is inexpensive so it's affordable as a hobby. The podcast's listener numbers continue to rise so eventually underwriters will come. Either way, I'll have fun along the way.

SV: What has been your biggest thrill in technology?

Jon: I think hearing your show for the first time is always a thrill and continues to be so. This year I went to the Consumer Electronics Show in Las Vegas in January. Seeing the future of technology all week with thousands of people worldwide and experiencing the different cultures while sharing the camaraderie of the show was an ultimate life-changing experience.