Coming through the Canada border is still not a sure thing 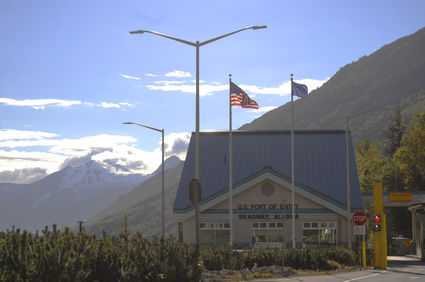 The Skagway, Alaska, US Customs Station sits high up in the White Pass above the town on the South Klondike Highway.

Tribal Administrator Sara Kinjo-Hischer said that a member had a moose hunting tag to use in Fairbanks, but was turned away at the Canadian border at the Fraser Border Station on the South Klondike Highway.

"The border agent said that subsistence wasn't essential travel and refused entry," she said. "It's up to the individual agent to decide what is essential and what's not."

There is a concern the council member could lose his tag, so letters were sent to Canadian Minister of Foreign Affairs and the Alaska Department of Fish and Game.

"They'll lose their tag if they don't use it this year, and we're hoping they'll put it up to next year," Kinjo-Hischer said.

In 1794, Britain and the United States entered into a new treaty, known as the Jay Treaty after Chief Justice John Jay, the American negotiator. It was a treaty of "friendship, commerce, and navigation." Article III of the Jay Treaty provided for free border-crossing rights for United States citizens, British subjects, and "the Indians dwelling on either side of the boundary line." Indians were also not to pay duty or taxes on their "own proper goods" when crossing the border.

With the pandemic still raging, the treaty has been suspended.

When will it open?

According to National Public Radio on Aug. 19, "Members of Congress are taking up the cause of Point Roberts and several other similar geographic oddities cut off by the international border such as Hyder, Alaska, Minnesota's Northwest Angle and Campobello Island, New Brunswick."

These places are so isolated that the only way out of town is through Canada.

But don't expect the border to open any time soon. NPR reports a poll of Canadians in July by Ipsos found 85 percent approved of the closure of the land border to non-essential travel and want it to stay that way at least until the end of the year.

A tale of woe

New co-owner of the Skagway News Gretchen Wehmhoff attempted to return to town from Chugiak and resume her position, as well as teach co-owner Melinda Munson some computer applications needed to put out the paper. She arrived at Beaver Creek and this is what happened, according to her column in the most recent Skagway News:

'"Where are you headed?"

"Skagway. I'm part-owner of the newspaper there."

"Why are you going now if it's been doing fine without you being there?"

Whoa. I didn't expect that. There was no warning, just a shot across the bow that made me sit up.

"I need to train my partner on new software and finish setting up the business," I said.

"Wait here." He shut his window.

After a few moments he opened the window and directed me to park.

I pulled ahead to a staging area. Another border officer wearing a mask and holding a notebook approached me. He explained that his job was to determine whether or not it was necessary for me to transit Canada to get to Skagway. 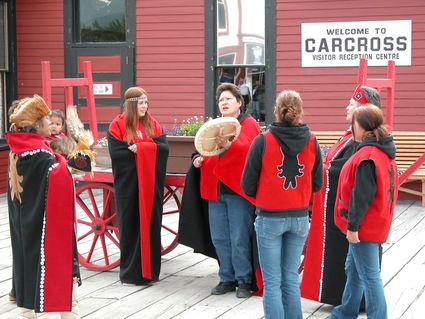 Members of the Carcross/Tagish First Nations welcome visitors to Carcross, Yukon Territory, Canada. It is the first town over the border from Skagway.

He had an answer for everything. When I said I needed my car, he said that wasn't essential. I told him my health and age put me at risk for flying. He asked for a medical note, which I didn't have. I told him I wanted my dog with me, but of course, I didn't have anything to prove that bringing her was important. She wasn't a therapy dog, but she was important to me.

I told him my business partner and I were learning about new software for billing and ads, but he said the software company could train us separately.

He was nice, and actually tried to help me come up with an honest argument that he could accept, but in the end, he said he couldn't deem my trip essential enough to need to drive through Canada.

"I'm going to have to send you back to Alaska."