Winter doesn't have to mean confinement

While you may not be able to go Outside, you can still go outside 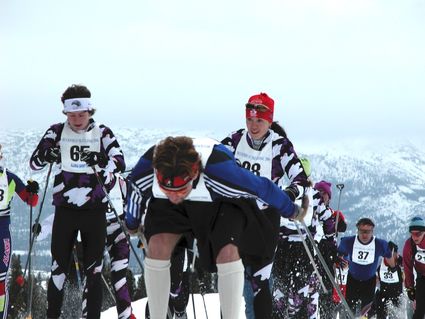 Racers take off in the Buckwheat Ski Classic in Skagway. Usually held in March, the event is postponed for 2021.

Cabin fever came early this year for sure. With a vaccine coming available within the next couple of months, once we can go outside with some safety it'll be like the gift of an early spring.

Meanwhile, consider getting some fresh air and sunlight by watching or participating in upcoming ski, skidoo and snowshoe races. It'll help with the blues and possible depression caused by the enormity of the pandemic's effect on our mental health.

The calendar is out for races across Alaska. Visit http://www.nscfairbanks.org/calendar/.

Almost all of these are on snowmachine trails.

Chena River to Ridge: A race for skiers, cyclists and runners held on trails in the Chena River State Recreation Area that includes two loops with race distances of 25 and 50 miles.

Tanana River Challenge: A race down the Tanana River from Fairbanks, up into the hills, then back to Fairbanks. For skiers, skijorers, runners and cyclists with distances of 25 or 45 miles.

OK, those may be too ambitious for a beginner - maybe just go and watch.

34th Denali State Bank Sonot Kkaazoot: Named after the Athabaskan words sonot (pronounced "saw not", meaning springtime) and kkaazoot ("to slide your feet across the snow") will be held Saturday, March 27, 2021 Details will be posted later this winter at https://sonotkkaazoot.org.

Give skis a chance

Consider taking up cross country skiing. Second-hand skis, poles and boots are available everywhere. Check out Craigslist on the internet or go to Play It Again Sports in Anchorage on Spenard or Old Seward Highway. It's a safe sport on a level trail, but if you feel more adventurous, there's hills to go up and down. Best of all, the snow is soft when you fall on your keester. This is a sport that can be enjoyed as you age and you will find you have better balance and flexibility should you take it up.

After having knee surgery, my doctor said I wouldn't be able to be a reporter, which in Alaska can be very physically demanding, but I won the Marsh Lake Loppett 5K in Atlin, B.C., in my age category (50) and sent him a clipping.

Oosik Classic in Talkeetna: 50 and 25K routes (approximately). Classic ski only, no skate skiing. Different routes each year with a big party, but maybe no party this year with the virus.

Susitna 100K: February, starts in Big Lake on a relatively flat trail. Racers can ski, bike or run on snowmachine trails. You don't have to do all of it, but it would be fun to be out with other racers or just watch.

Iditasport starts in Knik in February with 225-mile and 100K courses. A bit tougher than the Susitna races. Ski, bike or run on snowmachine trails.

Tour of Anchorage: 50, 40 and 25K routes for classic and skate skiers. Lots of people attend as well as some big name skiers.

Kachemak Bay Nordic Ski Marathon in Homer: 40 and 25K routes with a generally downhill track. Not an easy event, but with incredible views of Kachemak Bay.

Buckwheat Ski Classic: Skagway. A classic-only 5, 10, 25 and 50K distance race. Costumes are encouraged. There's a fantastic halfway stop with libations and a masterful snow sculpture. March 2021 race is postponed because of the pandemic and because the Canadian border is closed as the race is held in the Yukon.

I bet there are still some ski trail warriors out there.

Maybe in person or in the comfort of an easy chair, these classic Alaska races are sure to thrill you.

The 38th running of the Iron Dog snowmobile race takes off in February. This world's longest, toughest snowmobile race's Pro Class teams will leave Big Lake on Saturday, February 13, 2021, then head to Nome for the Northern Air Carrier halfway banquet, then off like a flash of metal to Koyuk, Buckland, Selawik, Kiana, Noorvik, Kotzebue, back through Buckland to Koyuk. The Expedition Class contestants start out on Thursday, February 11, on Big Lake and finish in Nome in about five days. 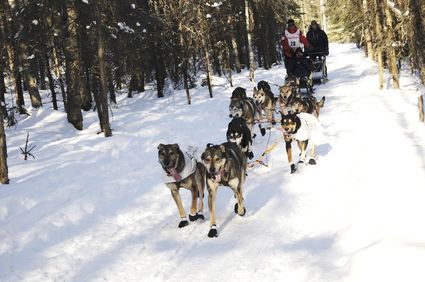 Want to be socially isolated while watching the start of the Iditarod? Take to one of the trails out of town.

Then there's the Iditarod. The ceremonial start on Anchorage's Fourth Avenue is in the shadow of the Balto statue, Leonhard Seppala's Siberian husky that led the team into Nome with much-needed diphtheria antitoxin in 1925. No matter how any times you watch it, it never fails to thrill.

On March 6, 2021, 57 mushers will leave Anchorage for Willow and the real start of this race, taking the so-called southern route, which is taken on odd years. While both the northern and southern routes follow the same 352-mile trail from Anchorage to Ophir, there they diverge and rejoin at Kaltag, 346 miles from Nome. The switch is to give the small villages along the trail some breathing space from year to year.

Both the Iron Dog and Iditarod will follow the best health guidelines for pandemic safety.

Go and watch, but if you're feeling frisky, take to the trails yourself.