College graduation in the age of COVID-19 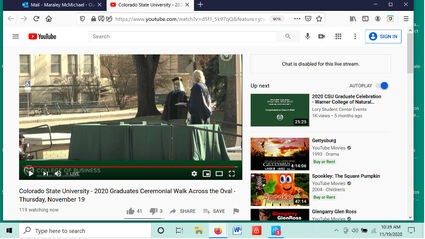 I sat at my dining room table this past Nov. 19, ready and waiting for the appropriate time to click on the link for our daughter's college graduation. Erin said she didn't know many details about her outdoor graduation ceremony for Colorado State University, but the invitation link stated the program would be from noon to 12:30 p.m. After making adjustment for Alaska time, I sat waiting with curious expectation.

Soon I found myself thinking about attending our son's college graduation in December 2003. At the time, my husband, Gary, and I lived in Slana. I ended my employment at the Slana School in early December, so we had no time constraints for travel. Before we left home we had to close up the house for winter, which meant Gary had to completely drain the water system since there would be no heat. We packed everything we'd need for time in California and Colorado, as well as living with my dad in Homer both before and after the trip "Outside". Since we used generator power in Slana, we even took our chest freezer full of frozen food to plug into Dad's electricity in Homer during our absence.

Once in Homer, we settled in and visited Dad for a few days before heading to Anchorage for our Dec. 10 flight to California. After a few days with Gary's relatives, we helped his mother, Melba, pack up her car and the three of us took off for an extended road trip. First stop was Fort Collins, Colorado where we stayed with Erin in her condo. After our son's graduation in Boulder on the Dec. 18, we celebrated Christmas with our kids and their friends before taking Melba to visit friends and relatives in Colorado, Texas and Arizona before returning her to her home in Gilroy, Calif. Gary and I didn't leave California until January 25. After flying in to Anchorage, we made a one-day trip to Slana to pick up our dog and our mail and then headed to Dad's house in Homer until the end of March, where the winter weather was "balmy" compared to Interior winters. Our trip to attend our son's college graduation was six weeks long.

Now, 17 years later, I was sitting in front of my computer waiting to view an online version of a college graduation in Fort Collins, Colorado in the age of COVID-19. I started paying attention when my computer screen changed to a green background with the words "CSU Colorado State University" with their Rams emblem and band music playing. Soon that screen switched to a live shot. A lady dressed in a black cap and gown trimmed with green (a professor, I assumed) stood behind a table covered with a green cloth and stacks of black folders, which I figured to be the diplomas. Sunshine filtered through tree branches in the background and a slight breeze made the tablecloth ripple.

After a few moments, a pleasantly clear voice stated the name of a student and their degree of education. That student appeared on the left of my screen and walked to the middle where the professor handed over a diploma. Then the student turned and looked toward my left, where I saw a professional photographer for the first time. The photographer asked the student to remove their mask. After a couple of photos were taken, the student then walked out of my screen to the right. Having no program of any kind, that gave me an indication of how things would go. I just needed to be alert and listen for my daughter's name. She would be on my screen for less than a minute.

As I sat wondering if the students were in alphabetical order or in some kind of order by their degrees, I heard her name. Erin McMichael with a Bachelors of Science in Business Administration with a concentration in Accounting. As I watched her "live" over YouTube, receiving her black folder and removing her mask for a photo, my heart unexpectedly swelled with pride. At the age of 42, she had successfully completed six years of part-time and full-time classes, while also working and being a mother of two.

There had been less than 10 students in front of her. Surprised that Erin's part had come so early in the half hour time slot, Gary was soon ready to leave for Wasilla and get busy with our list of errands, with the last one being to stop at the Wasilla Senior Center to pick up take-out meals. We had chosen this particular day to do our errands simply because we liked the lunch menu. However, I wanted to watch until the end of the ceremony.

I noticed how differently the students dressed. Many wore cap and gowns like Erin, but some were dressed very casually. One male wore a suit coat with his jeans and had his dog on a leash. One female wore a short black dress. Occasionally a second professor would join the professor at the table in presenting diplomas. Both women were very careful to get out of the way of the photographs.

Band music continued to play in the background and I wondered if it might be recorded music of the CSU band, but had no way of telling.

I finally realized this would be the perfect time to practice taking a "screen shot" – a procedure my sister-in-law had recently taught me. Even after many tries, I could never get a student in just the right position. So, I settled for what you see here. Later Erin sent us a "selfie", but she is wearing a mask. Oh well. Masked faces are the state of affairs in this age of COVID-19.

I thought about all the other parents, family and friends watching by YouTube. When I signed on at 9:55 a.m., there were 106 viewers. By 10:05 there were 161. However, I noticed the longer I watched, the fewer the viewers. Evidently, after their student was presented with their degree, many signed off. The half hour program was obviously running late and by 10:45 a.m. there were only 65 viewers. Periodically there was a pause in the activities as the next group assembled, but abruptly the announcer congratulated the students and the screen changed to a green background with the words, "CONGRATULATIONS, Thank You For Joining Us!" Only 55 viewers stayed through to the end. There were several half hour programs scheduled during the day. 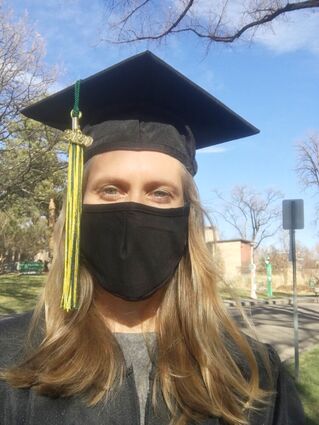 Erin and all the other students were not yet finished with their classes. The university decided to have the ceremony early, because after the Thanksgiving break, students would not be returning to campus. At the time of the ceremony, Erin said she had completed about 75% of her work, with still a project, a paper and exams to come. This was one of her lighter class load semesters.

What a contrast to our son's college graduation that we attended in person in December 2003. But, what a blessing to have the technology to be able to share Erin's special moment live, while sitting at our dining room table thousands of miles away. College graduations are just one of many important 2020 life events altered by the virus.