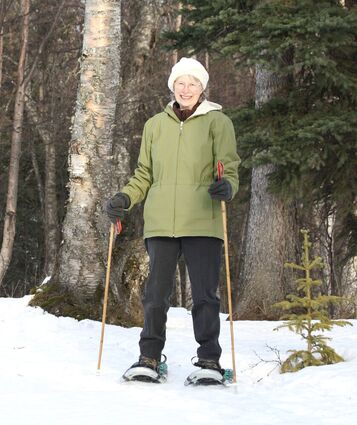 Maraley McMichael snowshoes in her backyard property near Palmer, April 2020.

Recently I came in from my afternoon snowshoe laps and quickly removed all my winter gear. While waiting for my tea water to heat, I pondered my enjoyment of my favorite winter exercise. I hadn't gone out the previous day because of a 6-degree temperature along with our famous Mat-Valley winds, which were blowing snow sideways. But, my recent session had been exhilarating. Fresh moose, snowshoe hare, and mouse tracks all showed that I wasn't the only one to venture out once the "blizzard" let up. However, thankful that I am, snowshoe laps were not my first choice for winter exercise and a lot of work was involved before they became a possibility.

In the fall of 2011, my husband Gary and I moved from our log home on 5 acres in Slana, back to Palmer. We found a much smaller house in a typical subdivision, 10 minutes out of town. That next summer, while exploring our new back yard, I noticed several bushes with clumps of beautiful wild red currants farther out in the non-landscaped area, so I grabbed my berry picking bucket. But the tangle of downed trees and thick underbrush was hard to navigate and picking berries was a struggle. When I almost broke a leg falling into an invisible hole between two downed logs surrounded with green underbrush, I knew I had to quit. The following summer I asked Gary to use his tractor to help remove the downed logs, so I could safely pick berries. When our son came to visit from Colorado, he and his friend did additional "logging" work. After a couple of summers of effort, I could walk almost anywhere on our .9 acre of property.

By the winter of 2014/2015, I was sick of riding our second hand stationary bike for exercise and finally remembered my past love of cross country skiing. Between being snowbirds and then dealing with health issues, I hadn't cross country skied in ten years. Driving to the nearby, newly opened Government Peak Recreational Area seemed too much, but how about skiing around my own yard? With the downed logs out of the way, I could imagine a nice ski trail around the perimeter of our property.

Soon I geared up and set out for some fun. There were some slight hills and dales that wouldn't have bothered me at all in 2005, but this time I felt like an accident just waiting to happen. Before completing one pass, I knew that cross country skiing was no longer a safe activity for me and before I got back to the house, I removed my skis. They were just too slippery for my balance problems. I was shocked and disappointed that my body was so uncooperative, but was thankful I hadn't fallen and broken anything.

A few days later, I remembered the three pair of snowshoes we had tucked in a corner of the garage. Perhaps snowshoes would have better grip. I dug out the pair in the best condition and learned that my ski boots would fit fine in the leather harnesses. After gearing up, I tentatively began making a trail while continuing to use my ski poles for stability. Much better. Enjoyable, in fact. It took a while to get used to the long tails and I fell more than once by tripping myself. But soon I was enjoying a daily snowshoe jaunt without having to drive anywhere.

Then in the summer of 2017, I went to a friend's garage sale. She was selling everything and returning to her home state. When I saw her pair of modern bear paw style snowshoes, metal frame with neoprene/nylon decking, I instantly knew I needed them. No tails

would certainly be safer, and once home, I was even happier to notice the bottoms featured metal cleats. That winter, because of no tails and the wonderful grip of my "new" snowshoes, I could confidently pick up the pace and my snowshoe laps became real exercise, not just a pleasant outdoor activity. Snowshoeing had become my preferred winter sport.

Ever since, each winter, beginning with the first good snow through March, I get outside and do snowshoe laps almost daily. Four laps is the minimum and I've done up to 10, but six to eight is the usual. Feeling confident about not falling, I can push along at a pretty good clip. Sometimes I find myself either daydreaming or so deep in thought, I forget what lap I'm on. So I've gotten into the habit of marking the snow with a ski pole each time I pass a certain location. Before the snow gets too messy with several days "accounting", along comes a fresh snowfall or the winds rearrange the snow into a new blank slate.

I learned to check for moose each day before beginning my laps. I also check the weather. In mid-winter, my standard gear is long underwear, my down vest, and my down winter coat. A balaclava around my neck and over my face is especially necessary when the wind blows sharp ice crystals. In the spring though, just a vest and light jacket are enough. I choose among three weights of gloves and mittens.

I usually switch directions every two laps, just to change things up, but the scenery also changes from day to day. Sometimes the surroundings are like a winter wonderland with every tree surface heavy with fresh snow, while other times it looks barren and wind swept. Especially after a fresh snow fall, it is so fun to notice all the new animal tracks. I've snowshoed while wearing a headlamp, but prefer broad daylight.

I've walked laps at the Cottonwood Creek Mall and run laps at the Wasilla High School gym back in the 1990s, before private gyms became the norm, but I so prefer my daily outdoor snowshoe laps compared to indoor anything. They are both physical exercise and mental therapy. And, I'm always a little disappointed when my trail turns to mush in late March/early April, but by then the subdivision roads are almost ice free and I can switch to my favorite outdoor summer exercise – bike riding.