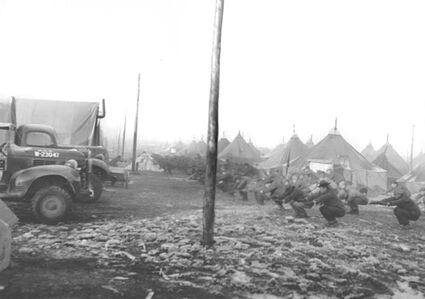 World War II soldiers perform exercises in front of their tents at Fort Richardson in June 1940.

When the war actually began in September 1939, rumors ran rampant around Anchorage that his pleas had been heard and military bases soon would be built to protect the northern front.

Congress finally appropriated funds for Alaska in 1940, and the military started making plans for the construction of navy and army bases, as well as a fort, ranging from Anchorage to Sitka and Kodiak to Unalaska. On June 27, Anchorage's 4,000 residents greeted the first troops.

Under the command of Maj. B.B. Talley, engineers started construction of Fort Richardson, in honor of Brig. Gen. Wilds P. Richardson, who'd served as the first president of the Alaska Board of Road Commissioners from 1905 to 1917. The engineers also worked on an airfield, named to honor Capt. Hugh M. Elmendorf who'd died in an aircraft accident at Wright Field in Ohio in 1933.

Fort Richardson later became a U.S. Air Force base and took the name Elmendorf. The U.S. Army built a new Fort Richardson seven miles away, near the foothills of the Chugach Mountains.

Brig. Gen. Simon Bolivar Buckner arrived in Anchorage in July 1940 and took charge of all military operations in the territory.

With the building of the military facilities stretching out over several years, serious housing shortages developed as the city's population swelled to about 9,000 by mid-summer 1941.

Irene E. Ryan, who arrived in Alaska in 1932, recounted what it was like living through those tumultuous times in "Anchorage: A Pictorial History," by Claus M. Naske and Ludwig J. Rowinski:

"...after the outbreak of the war, a blackout went into effect. Cars drove with parking lights only, and on the base all windows were painted black with only a small slit in the center for daylight. In the face of a shortage of black paint, residents improvised and dissolved phonograph records in acetone and used the result as a paint substitute.

"As a precaution against possible Japanese air attacks, trenches had been dug. So whenever the sirens sounded, citizens were to vacate their homes and seek shelter in these trenches."