A memorable trip in pandemic times 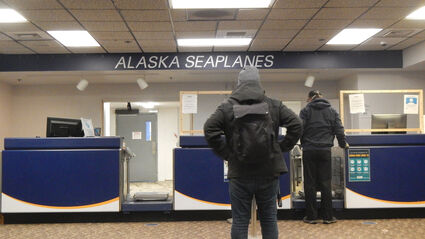 For four days our flight to Tenakee Springs was canceled due to weather. But that's Alaska, where you can't get somewhere from anywhere anytime.

OK, so I haven't lived in Alaska since 2012, and we decided to return when real estate prices tripled in Gloucester, Massachusetts, and the streets of my mother's beloved working-class fishing hometown became crowded with Lexuses, BMWs, Mercedes and Jaguars. I even saw a Rolls.

Plus, people were not behaving in the stores, especially the supermarkets where management had stuck arrows down to indicate the flow so people could keep a safe distance. Time after time, I'd point out to someone they were going the wrong way and be told "Oh really?" or with a shrug "It happens," which made me utter bad words under my mask. And I have to admit I liked the mask for that, as it muffled my old lady mutterings and hid my tongue when I stuck it out.

However, the tension I dealt with in the stores was making me so nuts I asked my doctor for something to calm me down.

Now, nestled here in Tenakee Springs with maybe 45 souls and regulations -- like only two people at a time allowed in the post office or the store -- that are followed faithfully, I no longer need those pills.

I've moved lots of times. My son thinks I should talk to a shrink about it, but really, I think change excites me or maybe I'm searching for the best place to be. This, my fifth cross-country move, was the most difficult, intricate and expensive ever.

Because Bruce Ware and I lived across the street from the main post office in Gloucester, a gorgeous granite WPA project, we ran a shopping cart across the street filled with boxes. Although the postal clerks were fascinated by our move to Alaska, they finally lapsed into moans of "More?" In the end, we spent all of our relief money that the feds gave us by giving it back to them through the U.S. Postal Service.

We had intended to drive across alongside a friend with a truck, which would have saved money, but we figured that in this time in American history, motoring across the border states in a Prius hybrid with very liberal bumper stickers and Massachusetts license plates would not turn out well. Had the border into Canada been open it would have been possibly safer.

Because we were living in senior housing, we had the second Pfizer shot a week before we left. In that last week, we canceled the internet so had no idea when we left for the airport in Boston that the country was at a standstill due to snow and ice storms. I thought maybe there'd be other flights than ours, but the airport flight board was but one panel. I'd never seen that before.

Our flight was moved to the next morning so that meant finding a hotel. The taxi driver finally took us to where we once stayed on another trip, only to find it was closed for renovations. But up the street was a Courtyard by Marriott with the best mattress and pillows I've ever experienced in a hotel.

Up at 5 a.m., we checked in at the Alaska Airlines counter in the cattle call line up. For some reason I thought everyone had boarded and so we went right on only to find out we were the first. And we were just lowly coach passengers.

While Alaska Air has, as has other airlines, limited the type of animals allowed on as service or emotional support animals, no one told the cat down the aisle of its elite status. Regular high-pitched wails pierced the air, laughable at first then deeply annoying.

The sound of the carts rolling down the aisles offered a possible distraction.

Remember the days when Alaska Air had real food – like a salmon burger or silverware with its logo on it (and I have such a spoon and a fork I got at a thrift store)? No more. And you have to have a smart phone to order a meal 24 hours before your flight. If you don't, you get bags of pretzels or a party mix. Save yourself the disappointment and pack a snack yourself.

We finally set down in Juneau after a six-hour layover in Seattle. Forget a direct flight, there's always a wait at SeaTac. Maybe it's a winter schedule, but pulling into Juneau at 11 p.m. or 2 a.m. is not fair to a state that gave your airline its name.

We'd heard the State of Alaska had discontinued the COVID restrictions at the airport but, nope, there were the inspectors. Bruce sweet-talked one who called him over and didn't have to show her anything. I, however, got a young man who was nervous and kept asking an older inspector for guidance and neither my immunization card or my negative COVID test would satisfy him and I had to fill out the state form.

At the Juneau airport you have to lug your suitcases across the street to the lot where the taxis and the hotel vans pick up people. Ours never did send the van to get us and the taxis other travelers called eventually went away leaving us standing in the cold for another one to come. Bruce said, "No one respects old people anymore." "They'll find our bones in the morning," I said.

Note: Have the telephone number of a taxi company at your final destination when you travel.

We spent the next day doing what all rural and Bush residents do when in the city - we went to Costco and dropped close to $500, then taxied the totes to Alaska Seaplanes for a flight the next day.

Then we taxied to the Department of Motor Vehicles to get drivers licenses.

I found the questions on the video test to be kind of puzzling. Why do I need to know how many years I'd lose my license if I caused an accident? Well, for the first time in my life, I failed.

"You can come back tomorrow and take it again," the very helpful DMV employee said, and I panicked because we were flying to Tenakee the next morning. Instead, I decided to get my state dentification card. Why do I need a license in a town with no roads and where cars are not allowed?

Our morning flight was canceled due to weather, and again the next day and again and again. But wonders of wonders, the state added the M/V LeConte on a run from Juneau to Tenakee. After starting out on Valentine's Day on a Sunday, we would be sailing a week later. All that time in hotel rooms, all that money spent. 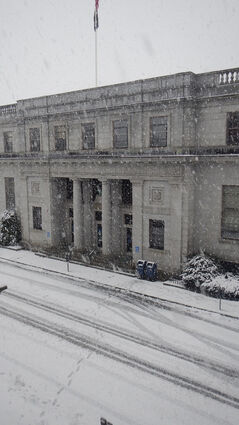 The view from the window of our apartment at the Central Grammar Apartments in Gloucester, Massachusetts, a senior living facility we liked but found far too tame.

Truthfully, I'd rather take the ferry than fly any day - it's safer and cheaper. Plus, we met some lovely people and had great conversations. The food is good, hearty Alaska fare and the view unrivaled. Yes, it takes longer than a plane, but being disconnected from electronics life is simpler and time passes pleasantly. Try it.