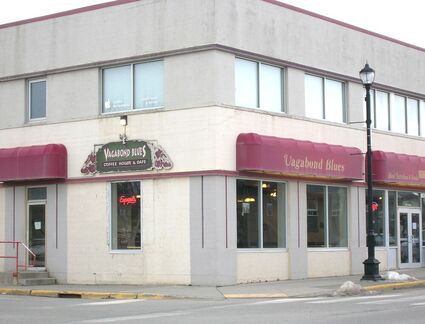 Dougie MacLean sang and played his guitar at Vagabond Blues coffee house in Palmer in May, 2017.

One of the best music concerts I ever attended took place right here in downtown Palmer at Vagabond Blues, back in May of 2017. From Scotland, Dougie MacLean sang and played his guitar. He said he'd been a traveling minstrel for 44 years.

About 25 years ago, my husband Gary and I attended one of Dougie's concerts at the Performing Arts Center, but this second one in 2017 was even better because I didn't have to drive to Anchorage. And I was so physically close to Dougie, I could see his strands of grey hair and the wrinkles on his face. Somehow he had gotten older, but so had I. I made a mental note to "Google" him when I got home to learn his age. Turned out he is one year older than me.

A friend and her husband had saved me a seat next to them in the third row from the front, so I didn't have to show up an hour early, which my health wouldn't allow. I'd wanted to attend some kind of music concert at Vagabond Blues ever since we moved back to Palmer five years earlier and I wasn't disappointed.

Dougie said he had never played in the daylight before and that kind of bothered him. As I watched and listened, if I looked beyond his face, I could see the Cummins Dry Cleaning sign on the building on the opposite side of the street. It was an overcast, mist-spitting kind of evening, so no mountains were visible, but the green leafed-out alder trees swayed in the background.

He had such a strong Scottish accent, it was very hard to understand much of what he said and some words were impossible. But, that wasn't just me. At one point, my friend leaned toward me when the audience was laughing and said she didn't understand. I told her that he'd asked the audience to make ocean sounds for background during the chorus to his next song.

Most songs, he encouraged the audience to sing the chorus along with him. He took time to teach us the words and for one song, taught us to be the percussion background. When he travels, he doesn't bring his band, so it's always just him and his guitar on the stage.

One song was about his father and the chorus featured the words "weathered face". As I looked around at my fellow concert goers, I figured 95% of us had weathered faces. He told us a story his father told him, involving a school all three generations had attended in their small village of Perthshire. Dougie's grandfather and his brothers had a hard time getting to school in the winter because of the weather and a hard time attending in the fall and spring, because there were more important (as well as fun) things to do. One day in the 1930s, the teacher really ragged about the MacLean brothers because they came to school so seldom. She used them as an example of who not to be like. Dougie said he wished his grandfather could have told the teacher that sometime in the future, one of his grandsons would be successful enough to buy that old, abandoned school (it closed in the 1960s) and turn it into a recording studio. Dougie also spoke of his 5-year-old grandson, and the relationships among the MacLean men through the generations.

Another story involved the eruption of Mt. Redoubt in March 2009. A fellow named Mike has been Dougie's concert promoter all the years he has come to Alaska. One time Mike met Dougie at the Anchorage airport and didn't look his usual upbeat self. When Dougie asked what was wrong, Mike said he was worried about the concert that night. He said that Mt. Redoubt could blow at any moment and then he handed Dougie a mask. Mike drove him downtown to his hotel and told Dougie he would be able to see the smoke, steam and ash from his hotel window. That really got Dougie's attention. It wasn't the best concert that evening and the audience seemed ready to vacate with a moment's notice. When it was over, as people walked out of the Performing Arts Center, ash was falling from the sky.

Mike and Dougie then went to a bar downtown and there he noticed a large group of men really partying. Turned out it was the cast and filming crew from the "Deadliest Catch" and they were celebrating the completion of their filming for that season. Dougie was impressed that these guys were so into their celebrating that they had no idea about the volcano and didn't care. Dougie was stuck in Anchorage for a few days. He went home and wrote a song about the whole experience. He told us this background story so we would understand the verse about the Deadliest Catch crew and reference to the Bering Sea. When he finished singing, he said it was so great to sing to folks who understood the song. That when he sang it in Glasgow, the audience had a glazed over look at the mention of the Bering Sea.

Dougie writes most of the songs he sings. I listened for 25 minutes before I heard a familiar song at Vagabond Blues. He had few CDs available for sale that evening. My friend who had saved me a seat was the one who introduced us to Dougie's music 25 years earlier. At a later concert that Gary and I weren't able to attend, she purchased two CDs for us and I picked up another one from a thrift shop years later. All three continue to get much use.

Since it was such a small intimate audience at Vagabond Blues, Dougie said he would take requests. People weren't bashful and shouted out their favorites. He laughed and said he could tell how many years he had been coming to Alaska, as many of the requests went way back. 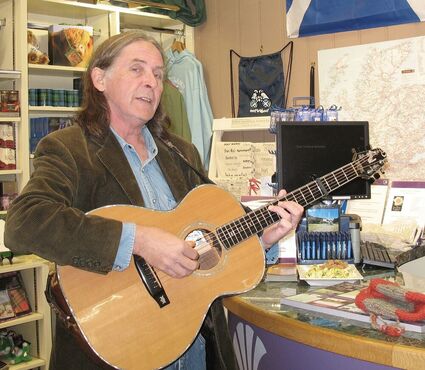 He saved "Caledonia" for the last, but then we managed to persuade him for an encore. When he returned to the stage, he made a comment to the effect that he knew it was still daylight, but that we all needed to go home, because he was tired. Of course, he said that with a smile on his face. He probably tells all of his audiences that they are great, but he certainly looked like he meant it when he stepped back from the mic and listened to us sing the chorus on a couple songs. I'm sure I'm not the only one ready for a return visit from this traveling minstrel from Scotland.