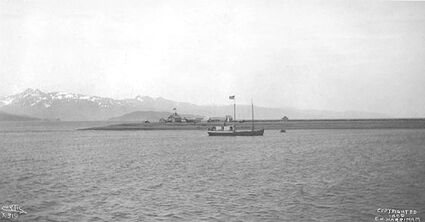 When Capt. Johnny O'Brien needed to have his appendix removed, Della Murray Banks, a Denver newspaperwoman who lived on the Homer Spit pictured here in 1899, offered her house for the operation.

When news reached Seattle of gold discoveries in Cook Inlet in 1896, every available vessel was pressed into service. With ships scarce, those heading north were filled to capacity with prospectors and their supplies.

And Capt. Johnny O'Brien's steamship Utopia, which set out with100 passengers that spring, was no different. In early May, it arrived close to Kachemak Bay, but couldn't continue on up Turnagain Arm because of ice in Cook Inlet.

Although this turn of events didn't really bother the captain, he had no way of knowing that he soon would be close to death.

O'Brien was used to adventure, according to Mary J. Barry in her book, "A History of Mining on the Kenai Peninsula, Alaska". Born in Ireland in 1851, he'd been shanghaied at 16 while traveling home from engineering school in England and sailed around the world for six years. When he finally worked his way back to Ireland, he found his parents had died.

Sometime later, authorities arrested childhood friend Peter Mathews as a member of the Fenians and sentenced him to death. O'Brien and members of the Sinn Fein blew up the jail and rescued him.

The two young men then escaped to the United States where O'Brien studied navigation. While in New York City, the two friends found themselves shanghaied onto the ship Hampton, which was to carry them to England to face trial as revolutionaries.

The men managed to escape, but knowing they could never return to Ireland, they decided to search for gold instead. The longtime friends unsuccessfully prospected in British Columbia in 1894, where a hungry Mathews died during a long, cold winter.

O'Brien returned to the sea. Over time, he made captain. And even though he had a couple of wrecks, he always stayed with his damaged ships. That helped him establish a reputation for tenacity and toughness.

He soon would have to rely on that toughness as he waited near Homer for the ice in Kachemak Bay to clear.

As several of his passengers jumped ship and made other arrangements to get to the gold fields in Cook Inlet, O'Brien suffered an attack of acute appendicitis and fell desperately ill.

One of the ship's passengers who hadn't jumped ship near Homer in search of alternate transportation to Cook Inlet offered to operate. The prospector told the captain that he'd once had a medical practice, but he did not divulge the reason that he'd abandoned it in favor of back-breaking work in Alaska's gold fields.

Volunteers cleared out Mrs. Banks' galley home on the Homer Spit for the operation. The doctor-turned-prospector, who hadn't performed an operation in years, accepted a fee of $1,000 and liberally dosed the captain with whiskey, the only anesthetic available.

And while the captain watched, the former doctor used a kitchen knife and scissors to remove the appendix and a forecastle needle and thread to suture the wound.

Even the doctor didn't expect the captain to make a full recovery. But under the watchful eye of a pleasant, well-mannered, dark-haired man named Mr. Smith, O'Brien emerged from his semiconscious condition seven days later and walked shakily onto the Utopia with the help of Smith and a sailor.

Since most of his passengers had left the ship, O'Brien ordered the crew to turn the ship around and head back to Seattle. And after O'Brien watched his ship round Cape Elizabeth, he fell into a deep sleep in his bunk. He woke up four hours later to discover her sitting still.

When he looked out his window and saw land all around, he picked up a medicine bottle and heaved it at the window to attract attention. The shattering glass brought a sailor to his cabin.

The sailor told the captain that his crew refused to continue the trip because the cook was bad.

O'Brien summoned Smith. He asked him for his two revolvers and help getting into a chair on deck. He then called for his crew.

As he pointed one revolver at the chief engineer's head, and the other at anyone who might interfere, O'Brien asked, "Are you going to turn the engines over and get the ship underway?"

The crew quickly changed their tune and headed the Utopia toward Seattle. It wasn't until much later that O'Brien learned the identity of the man known as Smith who'd helped him quash the mutiny and had nursed him back to health.

It was none other than the notorious confidence man, Jefferson Randolph Smith. Better known to Alaskans as "Soapy," he returned to Alaska after the Utopia made it to Seattle and robbed many during the Klondike Gold Rush.