Pickleball brings seniors together for fun and fitness

Some say they never imagined being so competitive 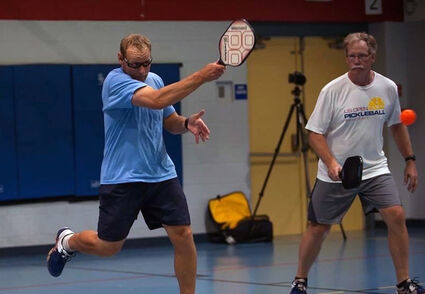 Aging surely has its challenges and one is keeping up your physical health as your body slowly deteriorates. Add an injury or major operation and the road to recovery may be too hard to meet – especially for those who spent a lifetime in competitive sports because they can no longer function at the high level they once could.

Some seniors have found a low impact activity that allows them to bounce around a court and smash the heck out of a perforated ball with a ping pong paddle. That's pickleball.

Take my brother, Jim, who the family refers to as "The Human Squirrel," long an adrenaline junkie and extreme sports enthusiast, he now sports metal plates in his back and five stents in his heart, but he's raring to go and does so at Homer HERC (Homer Education and Recreation Complex) and the South Peninsula Area Recreation Center (SPARC), a non-profit that started with youth soccer and has expanded to pickleball and roller skating.

"You can play outside at the high school too," Jim said.

He has become very philosophical about his health.

"As my body starts to fall apart, I can modify how aggressive I am on the pickleball court. I used to fly through the air to smash the ball, but I don't do that anymore."

The varying age groups in the game offer lessons, too.

"I watched people five or 10 years older than me and they enjoy it as much as I do and benefit from it as much as I do," Jim said. "Playing a slower, more passive game, that's it, it's not like tennis anymore, but more like a tender game of ping pong. I've seen people in their 90s play and they're competitive. And it's inspirational to see people in their 80s and 90s get out and do what they can. I'll see what happens in the next 10 years and if I stop falling down, I'll stop getting hurt."

Alaska Club goes all in

Janet Warner, executive director of fitness for the Alaska Club, said they have offered pickleball for four years now. Not only seniors play, she said.

"Our staff plays on Wednesdays at our Anchorage East End club and it includes people in their 20s and older," she said.

During the pandemic the clubs were closed by the Municipality of Anchorage from mid-March to mid-May of 2020.

"We returned with outside pickleball last summer and back into the clubs in September of 2020,"

she said. "Precautions include disinfection of all equipment, everyone being scanned at the front desk and wearing of masks."

Alaska Club has outdoor courts at the South Anchorage location and indoors at East, South and Eagle River.

Players do not sign up; instead the games are "pick up," with eight to 30 people participating.

Membership is required, but a member can sponsor a guest if they want a friend to play the game with them. And there are pickleball workshops that are open to non-members.

As for the benefits, Warner said, "All movement and social interaction is great for overall health – so we see huge benefits from the overall population."

"I play pickleball with my husband, Doug, and we're both 65," she said. "I got started last year when a friend convinced me to try it. It was addictive. I have never played sports before now. I am active and love watching sports, but never have been a participant."

An added perk to pickleball is togetherness.

"I then got my husband, who played tennis and other sports in high school and college, to come play." She said. "Now we both play almost everyday. It's the only sport we have been able to play together."

Hunter and her husband noted marked physical improvement since playing.

"We are both finding that physically, our reaction time, hand-eye coordination, agility and flexibility have improved," she said. "It is also mentally engaging. Trying to figure where the ball is going to land, what kind of spin it has, and trying to place shots and keep score all keep us on our toes."

Loneliness and social isolation can also be a degenerative feature of aging, but pickleball addresses that.

"We have also met many great people and developed some close friendships over the last year," she said. "We are planning other activities to enjoy together."

New-found confidence and a hint of competition are also gained.

"Over the weekend I participated in a tournament. Something I never thought I would do. Winning was the objective, but in the end it didn't matter," she said. We had fun and as always, laughed a lot. Pickleball is also good for your soul."

Pickleball pick up games in Anchorage

The Anchorage Pickleball Club was formed at the end of the summer of 2020 with a goal of promoting and developing pickleball in the Municipality of Anchorage. With 122 members the first year, the club began recruiting for more members this spring. 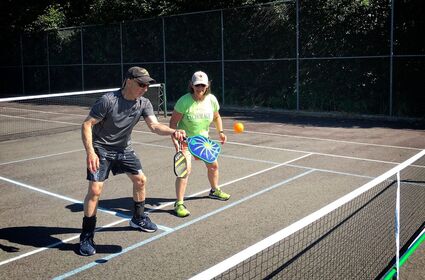 Jim and Ruth Lavrakas practice on the court in Homer.

Open Play is every Monday, Wednesday, Friday and Saturday from 11a.m. to 2 p.m., and Tuesday and Thursday from 5 to 8 p.m., weather permitting at the Bonnie Cusack Memorial Outdoor Rinks (previously Ben Boeke) outdoor rinks.

Play is free for a $25 membership fee, non-member fee is $5 per day or $25 for the week. Visit http://www.anchoragepickleballclub.com for more information and to sign up for the newsletter.

"Places to Play Pickleball in Alaska": the Places2Play.org website lists locations, facilities and times for pickleball around the state, from Palmer and Kodiak to Sterling and Ketchikan. Listings may not be completely up-to-date, but provide a good start and contacts: https://bit.ly/3jsUtTd