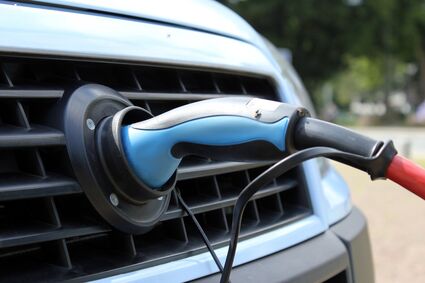 A few weeks ago I asked my wife if she would like to go on a "date." I told her that it has two parts, and the second part is a picnic here in Anchorage featuring Arctic Roadrunner hamburgers. With some apprehension, I circled around to the first part of the date. "But first, let's go take a look at the free electric car charging station in the parking lot of Chugach Electric."

During the previous few months I had been - perhaps obsessively - perusing the internet about electric vehicles, watching loads of YouTube videos, and listening to numerous podcasts about electric vehicles. I kept up a running conversation with Christy about my findings, so the somewhat unusual highlight of our "date" was not all that surprising to her. The question I was trying to resolve was this: Should our next car be a fully electric vehicle, or perhaps a gasoline/electric hybrid?

Compared to gasoline-powered cars, electric vehicles are way more fuel efficient, less air-polluting, much cheaper to run, have very little maintenance, and are typically less prone to breakdowns. Some of the vehicles have heated seats and steering wheels that can be remotely turned on with your smartphone before you leave the house, and once on the road, electric vehicles are very quiet to operate. Finally, if you have an electric vehicle plugged in while you sleep at night, you leave the house in the morning with a "full tank" - no need to fill up at a gas station. So, I am interested.

Electric vehicles and hybrids are increasingly mainstream globally and in the United States. According to Bloomberg New Energy Finance, "Electric vehicles (EVs) currently make up only 3% of car sales worldwide. By 2025 electric vehicles (EVs) will reach 10% of global passenger vehicle sales, growing to 28% in 2030 and 58% by 2040." General Motors recently announced that by 2035, they won't be making any gasoline-powered vehicles. Their entire lineup will be electric. Other auto manufacturers are headed in the same direction.

According to Policyadvice.net, "58% of new car sales in Norway were electrically chargeable in the first half of 2019. Iceland takes second place with 18%, followed by Sweden with an 11% [electric vehicle] market share." Note, by the way, that these are all cold northern environments similar to Alaska. So much for the occasionally expressed notion that electric vehicles do not work well in cold climates.

Here in the United States, 727,000 electric-drive vehicles were sold in 2019. About half of those were plug-in electric cars capable of operating on electricity alone.

In Alaska, according to the Alaska Electric Vehicle Association, there are currently about 1,600 "electric vehicles," which include any vehicles you need to plug in to charge the battery. That includes, among others, around 350 Teslas of various models, over 500 Nissan Leafs, and about 250 Chevrolet Bolts and Volts.

There are fundamental distinctions among electric vehicles you should know about, because each type has strengths and weaknesses that may help you determine which is appropriate for you. The first is a hybrid electric vehicle (HEV) which runs on gas and you never plug in. The electric battery and motor work with the gasoline engine to make it more efficient. Think Toyota Prius, which has been around since the late 1990s.

At the other end of the spectrum are the battery electric vehicles (BEVs), which run solely on electricity stored in batteries, commonly with a range of 200 to 300 miles. There is no gasoline engine. Think Tesla or Chevy Bolt. Typically, you would charge this up at home, probably with a special charger installed by an electrician. Great for trips around town and nearby environs, but not much further. Alaska is short on public chargers to extend your range, although RV parks often have 240-volt connections you can use for an overnight charge.

Finally, there are plug-in hybrid electric vehicles (PHEVs), which typically run for a limited range (often 25 to 40 miles) on battery power before switching over to an internal combustion engine. You would likely plug this in at home overnight for a charge. It is all-electric for trips around town, but operates on the gasoline engine once the battery is drained. It's a good compromise if you are not ready to go all-electric quite yet. Examples include Honda Clarity and Hyundai IONIQ PHEVs.

For more information, contact the very knowledgeable Dimitri Shein at the Alaska Electric Vehicle Association, akeva.org, (907) 308-2078; or take a look at the websites of Alaska electrical power generators in Anchorage, Fairbanks and Juneau for lots of local information about electric vehicles. Sooner than later you just might kiss your gas guzzler goodbye forever.

What about my electricity costs?

According to the Chugach Electric website, the cost of charging an EV is about half the cost of fueling an internal combustion vehicle when fuel cost is $3 per gallon and electricity is $0.20 per kWh, which is Chugach's approximate residential rate. Put in dollar terms, if you drive 10,000 miles in a year, you would spend $1,390 using an average efficiency gasoline vehicle, as compared to $690 to power an average efficiency electric vehicle, saving $700 per year.

Panelists on a Commonwealth North forum report that the typical cost to install a home charging station is $500, but can run into the thousands depending on the particulars of the installation, such as the location of fuse board vs where charger will be. The wall-mounted charger itself costs about $400 to $1,200.

From Insideevs.com: "Every electric vehicle sold today comes standard with a 120-volt level 1 portable charger. These chargers can be plugged into a simple household outlet, and don't require any special installation. Some manufacturers, such as Tesla, supply a plug-in 120/240-volt Level 1/2 charger with the vehicle. These dual-voltage chargers can be used with either a 120-volt or a more powerful 240-volt outlet like what an electric dryer plugs into.

"However, most manufacturers only provide a basic level 1, 120-volt charger, and offer a higher-powered level 2 unit for sale as an option. In order to recharge their EV faster, many owners choose to install a 240-volt electrical supply and level 2 charging station."