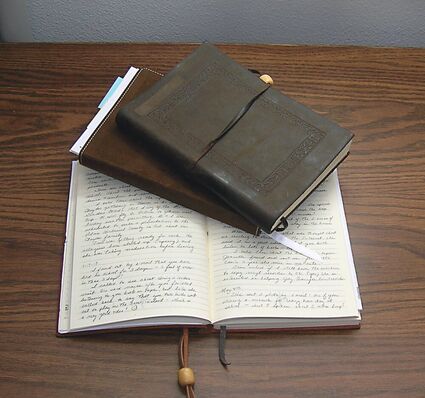 Author Maraley McMichael started this handwritten journal for her grandson in 2006, planning to present it to him as a gift when he turns 18.

I became alarmed when what I thought could become treasured gifts to my grandchildren might turn into indecipherable codes by the time they received them. Back in 2013, it was called to my attention three times in less than a week that cursive handwriting was on the way to becoming obsolete. Since before each grandchild was born – Harlen in 2006 and Amelia in 2009 – I have kept a journal for them. Written in cursive. The plan is to give these diaries to them when they turn 18 or graduate from high school.

My husband and I have never lived in the same state as our grandchildren, but for five years in their young lives, we were able to spend a month each fall and spring with them while living nearby as snowbirds in our travel trailer in an RV park. Through the years there have also been phone calls, internet Skype visits, and many in-person visits both in Colorado and Alaska.

For their journals, I write down the important events: First tooth, first steps, first haircut, first day of school, funny things they say, personality traits, etc. Usually it's in the form of dated, hurried, sloppy cursive handwritten notes. Then I transfer the information into their journals at a later date, several entries at a time. Because of a major health issue when Harlen was two years old, I once got six months behind, but eventually caught up.

At the beginning of this project, I never even considered printing. Cursive is my natural handwriting and so much faster. But, I did determine to use my best handwriting so they wouldn't have trouble reading them and I also chose to use a lead pencil for neater corrections.

My daughter actually supplied the seed for this project years ago when she gave me a beautiful brown leather journal. It was so special, I really didn't want to spoil it with my messy handwriting. When she called to say that she was expecting a son, I knew immediately where to record that wonderful news. I am now writing in a third brown leather book for Harlen.

When we learned about Harlen's new little brother or sister to be, I started taking notes, but decided to wait until the baby was born before buying another special journal. When I went to the bookstore to pick out something special for Amelia, I chose a beautiful green vegetation print -- and I purchased five of them, so I wouldn't run out if they were discontinued.

Part of my reason for this project was that as a parent of young children years ago, I felt certain I would remember all those special events. But, after three children and many memories later, the details were lost.

Back in 2013, I began hearing stories from friends about younger people not being able to read their cursive notes, and news stories about cursive being phased out from being taught in public schools. The thought struck me: What if my grandkids can't read their journals? What a revolting development. Cursive handwriting has been around for hundreds of years, so why does it have to change during the exact generation that will affect my grandchildren?

Having learned from experience about inaccessible secret language, I had no intention of giving a gift that needed decoding. In the early 1990s, I came across a letter I'd written in high school to my boyfriend (who later became my husband). But I had written it in shorthand and after 20 years of nonuse, I couldn't read it. At the time, I volunteered at Pioneer Peak Elementary School. When I noticed the administrative secretary using shorthand, I asked her if she would transcribe my letter for me. She was agreeable and set up a time after the school day was over.

I was certainly curious, but also a little nervous as to the personal nature of the contents, wondering if I would be embarrassed. I waited while she silently read and typed the shorthand. When she handed me a typewritten page, I asked about her fee. No charge! Thanks again Linda Myers-Steele. In the car in the school parking lot, I quickly read the transcription. So much for a secret love letter; the contents were quite benign.

All the hullabaloo in 2013 made me think that by 2024 when my grandson turns 18, he may need help from a friend like Myers-Steele to translate his journal. I even considered switching to print for my entries, but I figured it would be easier to teach my grandkids cursive. 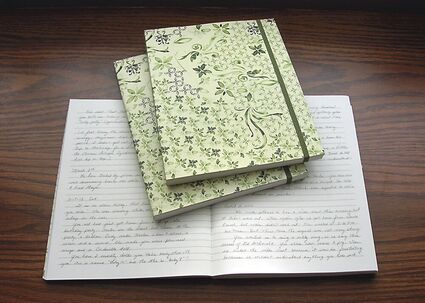 Maraley McMichael started this journal in 2009 for her granddaughter, Amelia. All entries are in cursive handwriting -- but will Amelia's generation be able to read cursive?

My daughter did not know these journals existed for years. At first, I didn't want to tell her about them, because I didn't know if I could actually be diligent enough to keep up with such a huge commitment. Then I decided not to tell her, so it could be a surprise, along with her kids. However, she accidently learned about them in 2017 when she stayed at my home and saw a label on a box in my office. My fears were put to rest when I learned that the elementary charter school her kids attended taught cursive.

Harlen turned 16 last month. As far as I know, he and Amelia do not know about the journals. Now, I think age 18 may still be too young for my gift to be appreciated. I have two years to decide.