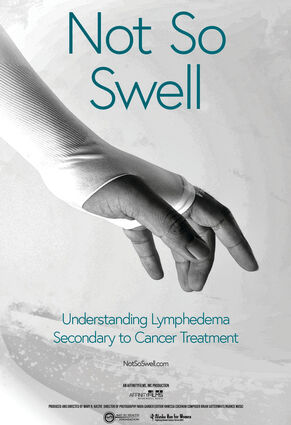 A newly released film, "Not So Swell," produced by Homer-based Affinityfilms, aspires to educate doctors, patients and the general public about lymphedema. A May 4 press statement notes the 30-minute film and a series of 16 shorter segments are now available for free viewing by Alaskans at www.affinityfilms.org/not-so-swell/. Lymphedema is a swelling in the arm, torso or legs that is caused by a blockage in the lymphatic system, which is commonly the result of lymph node removal or radiation damage following cancer treatment, notes the press announcement.

"Nearly 250 million people worldwide have lymphedema, but amazingly, even many people within the medical field are just becoming aware of it," stated Mary Katzke, owner of Affinity Films, which produced "Not So Swell."

Katzke had breast cancer 30 years ago and recently experienced lymphedema firsthand, which inspired her to create a film, a video library and a list of online resources anyone can use to learn more, notes the press statement. The project is sponsored by Mat-Su Health Foundation and Alaska Run For Women. The Lymphedema Education and Research Network (LE&RN) also assisted with the project and will be sharing the film with its network. The film is available to Alaskans for free. All others can download it for $14.99.

"Up to 40 percent of people who are treated for cancer end up with lymphedema," continues the press statement. "Others are born with it (although it's a different type of lymphedema). Early detection is important because treatments can prevent severe consequences later. With the proper treatment, lymphedema symptoms can be managed and controlled."

The short clips on the website also include staff training sessions that physicians and others in the medical field can use to inform their staff about lymphedema. Physician offices can contact Katzke at MaryKatzke@gci.net to request informational materials, and speakers are available to talk to groups about lymphedema.

Affinityfilms, Inc., is a nonprofit media production company formed in 1982. The company has a long history of coordinating projects around cancer. Others have included six documentary films on cancer, many public service announcements, wellness calendars and the photo exhibits "Alaskans in Pink" and "Pandemic Portraits," which is currently exhibiting around the state. Learn more at www.affinityfilms.org.