See the arctic in warm comfort 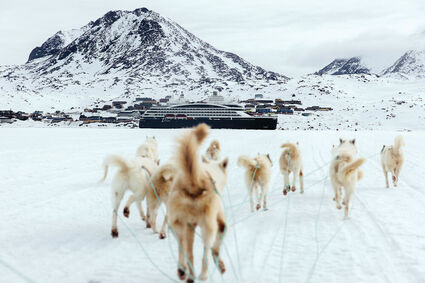 In 1994, when I first moved to Utqiagvik (formerly Barrow), the Russian icebreaker "Yamal" cruised into town with tourists aboard. It took 13 helicopter trips just to unload their luggage for transport to the Wiley Post and Will Rogers Airport for the flight out of town. The cruisers themselves were lightered to the beach in Zodiacs.

As editor of the Arctic Sounder, I got a helicopter ride out to the ship and landed on the deck. I forgot that ships are like a country unto themselves and hadn't secured permission from the captain to come aboard, so I didn't get a tour of the ship. Still, it was an exciting ride to see the toothy grin on its prow appearing through the fog.

See the ice before it goes

Most people think the ice in the Alaska Arctic is like cubed ice in their soda pop. But it is far more complex. It is multi-year ice, and more similar to a glacier than, say, icicles off your roof.

Year after year, snow falls on the ice floe and compacts, with layer upon layer freezing air samples and airborne debris from volcanic explosions in its grip. And like glaciers, the heavy layers press the air out of the deeper layers of ice, forming large, dense crystals. When light hits them, they absorb long wavelengths of light and scatter short-waved blue ice. That's the color we see.

Take a cruise to see the ice pack and its wondrous blue forest of bergs.

A few years ago, even the idea of building a hybrid electric, deep polar exploration ship capable of taking passengers to the edges of the earth in an eco-responsible way seemed impossible. But after six years the challenges were overcome and the cruise line PONANT's ship Le Commandant Charcot has set sail.

Polar ships have classifications, and while Russian nuclear-powered icebreakers are rated at the highest polar class, or PC1, Le Commandant Charcot is rated PC2 - the first passenger ship in the world given this rating. Named after Jean-Baptiste Charcot, French scientist, medical doctor and polar scientist, it is the first cruise ship to earn the North American Green Alliance certificate for its environmentally friendly practices and technologies.

Its design also allows it to slip between ice floes safely.

With 215 crew to 123 suites, your needs and wants will be well covered.

The restaurant, as food is a French national pastime, is to Michelin standards. It can't get better than that.

Off-ship, the tours and experiences are designed to immerse you in polar life.

A lightning-quick dunk in 32-degree water, wearing a bathing suit and attached for safety to a rope, is invigorating with health benefits like stimulating blood circulation, reducing inflammation and strengthening both the nervous system and the body's immune responses.

Other activities include dog sledding with Inuit guides, snowshoeing, kayaking, ice fishing, Zodiac or hovercraft cruises, and sightseeing trips such as a visit to "Golden Falls" or Gullfoss in Iceland.

You can also be a "citizen scientist." Guests have been helping with census activities for marine mammals by identifying whales for

the Happywhale program, while photographs of cloud cover are used as a data source by NASA. The cruise line's sampling of phytoplankton (aquatic plants and animals) and the detection of pollutants such as plastics, either at sea or in the ice are helping to improve the understanding and protection of polar regions.

Cross the historic long-searched for Northwest Passage to the most remote places in this maritime zone. 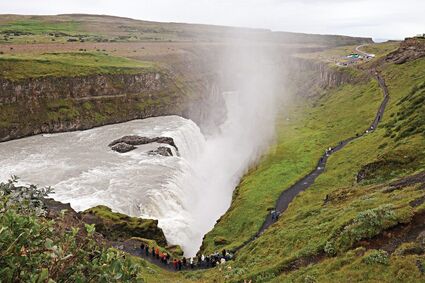 "Golden Falls," or Gullfoss in Icelandic, is one of the most beautiful and powerful waterfalls in Iceland, plummeting 105 feet in two tiers into the Hvita River gorge.

"Le Commandant Charcot goes several times a year to the same places. The data collected by guests will provide indicators about the current state and the changes in these environments," said Alison Thieffry, a nature guide and manager of citizen science, in the PONANT promotional flier. "It means that guests have a role to play in adding to current knowledge. Our aim is for them to become stakeholders, to some extent, in the polar regions. And these regions still have many mysteries to reveal..."

Visit a traditional Inuit village at the entrance to Fury and Hecla Strait and explore Aulavik National Park in Sachs Harbor, Northwest Territories, Canada that is renowned for the largest concentration of musk oxen in the world.

These cruises are of course pricey.

A 16-day, 15-night trip from Longyearbyen to Reykjavík, which also includes transfer to the airport as well as the Paris to Longyearbyen return flight is $39,650. Longyearbyen is situated on the island of Spitsbergen, the largest island in the Svalbard archipelago of Norway

Just imagine yourself sitting in the swimming pool and looking at the northern lights.